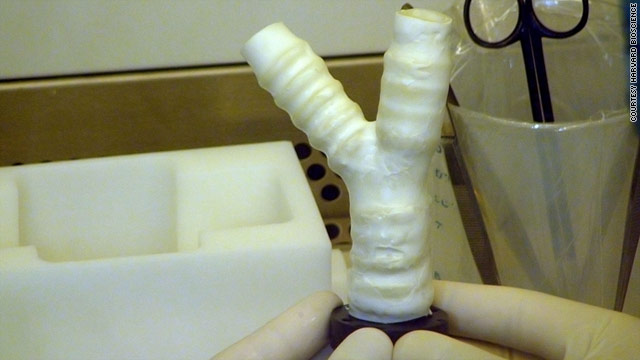 Scientists created an artificial trachea using polymers that had a spongy and flexible texture.
STORY HIGHLIGHTS

(CNN) -- For the first time, a patient has received a synthetic windpipe that was created in a lab with the patient's own stem cells and without using human donor tissue, researchers said Thursday.

Previous lab-generated transplants either used a segment of donor windpipe or involved tissue only, not an organ.

In a laboratory in London, scientists created a trachea, which is a tube-like airway that connects at the voice box and branches into both lungs.

On June 9, doctors implanted this synthetic windpipe into a 36-year-old man with late-stage tracheal cancer at Karolinska University Hospital in Stockholm. The patient is doing well and is expected to be released from the hospital Friday, said Dr. Paolo Macchiarini, professor of regenerative medicine there.

Tracheal cancers are extremely rare, accounting for less than 1% of all cancers.

After the patient's initial diagnosis in 2008, he had exhausted every treatment available, including chemotherapy, radiation and surgery, Macchiarini said. The patient, an Eritrean who had been studying in Iceland, is the subject of a BBC documentary airing Thursday in Sweden.

His tumor had almost blocked his windpipe, doctors said.

Rather than waiting for a transplant, his doctors suggested growing an organ. Scientists created a Y-shaped framework for the new trachea, modeling it after the specific shape of the patient's windpipe.

The form was made of polymers that had a spongy and flexible texture. Stiff rings around the tube mimicked the structure of a human trachea.

The form was then bathed in a solution containing the patient's stem cells "to get the cells to grow on the sponge material," said David Green, president of Harvard Bioscience. Stem cells can divide and turn into a range of cell types, including those in organs. 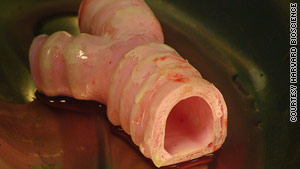 This is the artificial trachea, covered in the patient's cells.

His company worked on the stem cell solution, which is seen as a pink liquid in the photo at left. The purpose was to "seed" the synthetic windpipe -- as you would seed a new lawn -- to grow on the structure.

"Stem cells from the own patient were growing inside and outside," Macchiarini said. "This structure was becoming a living structure."

The stem cells were given physical or chemical cues to create the desired type, Green said.

Once the cells were thriving on the form, the artificial trachea was implanted into the patient.

His body accepted the new trachea, and he even had a cough reflex two days after the surgery, Macchiarini said.

Three years ago, Macchiarini made headlines by implanting an artificial trachea created from donor tissue combined with stem cells from the recipient, Claudia Castillo, whose windpipe had been damaged by tuberculosis.

"The results were quite good, but unfortunately we were still dependent" on organ donation, which can take months, Macchiarini said.

Creating the synthetic structure for the trachea in the current case took 10 to 12 days, compared with waiting months for an organ donor, Macchiarini said.

Earlier this year, regenerative medicine scientists at Wake Forest University School of Medicine reported that they had engineered five urethras between March 2004 and July 2007.

They had used a small piece of each patient's own tissue from the bladder, then grew the cells in a lab onto a mesh scaffold shaped like a urethra.

This area of research remains somewhat controversial in medicine, because critics say this could lead to human cloning.

"It's a beautiful international collaboration," he said about the recent effort that involved doctors and researches in Sweden, the United Kingdom and the United States. "If scientists and clinicians work together, we can help humanity."