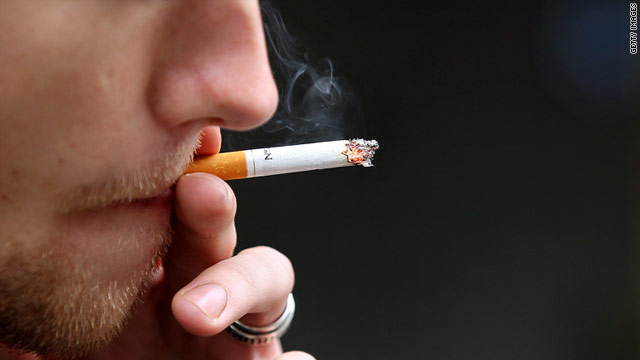 Chantix now carries a warning about cardiovascular risks in addition to a safety label about suicidal thoughts and aggressive behavior.
STORY HIGHLIGHTS

(CNN) -- A study published Monday in a Canadian journal concluded that smokers who take Chantix, one of the most popular smoking cessation drugs, could increase their risk of heart problems.

Chantix (varenicline) could raise the risk of heart attacks and irregular heartbeats, said one of the study authors, Dr. Sonal Singh, an assistant professor of general internal medicine at the Johns Hopkins University School of Medicine.

The heart problems are the latest in a growing list of concerns raised by patient reports, lawsuits and studies since the drug's approval in 2006.

The drug could cause changes in behavior, hostility, agitation, depressed mood, suicidal thoughts or actions, according to its warning label. Chantix carries a boxed warning -- the U.S. Food and Drug Administration's most restrictive safety labeling -- because of the risk of psychological events.

Chantix has been banned by the Federal Aviation Administration for pilots and air-traffic controllers because it may cause loss of consciousness and blackouts. Truck and bus drivers are also not allowed to take the drug.

In the study published in the Canadian Medical Association Journal, researchers examined data from clinical trials involving 8,216 healthy people who received either Chantix or a placebo.

Taking Chantix was associated with an increased risk of serious heart problems. These events were reported in 52 people out of 4,908 (1.06%) who took Chantix, compared with 27 of the 3,308 participants (0.82%) who took the placebo.

While the difference on its face appears to be 0.24%, the researchers calculated the actual risk to be 72% using a statistical method that's applied when evaluating multiple studies. Singh and the authors analyzed data from 14 previous studies. They calculated the risk for each study to arrive at 72% as the overall weighted risk.

To see in detail how the authors calculated the statistic, see Figure 2 on page 6 of the study

Chantix raised a smoker's baseline risk of having heart attacks, congestive heart failure or other problems such as irregular heart beat, Singh said.

"The use of varenicline among tobacco users was associated with a 72% increased risk of serious adverse cardiovascular events," the authors wrote.

When quitting smoking, "you want to decrease your risk of a heart attack, instead of increasing a heart attack by 72%," Singh said. Their study was funded by the National Center for Research Resources, a component of the National Institutes of Health.

Dr. J. Taylor Hays from the Mayo Clinic in an accompanying editorial published in the Canadian Medical Association Journal, wrote that the risk of "cardiovascular events is low" from taking Chantix.

"First, the main result of the meta-analysis, a 72% increased risk of serious cardiovascular adverse events, must be tempered by the rarity of these events among participants in both treatment groups," wrote Hays who has previously received Pfizer grant funding to conduct a trial on the drug.

Pfizer stands by its smoking cessation drug, which has been prescribed to more than 7 million people in the United States.

The drugmaker disagreed with researchers' conclusions, saying the study contained several limitations -- mainly that the number of heart problems was so small that it "raises concerns about the reliability of the authors' conclusions."

"The actual difference in cardiovascular event rates seen in the Singh analysis was less than one quarter of one percent," the company wrote in a statement.

Pfizer is working with the FDA to design a comprehensive look at existing research to evaluate the safety of Chantix.

Weeks ago, Singh and the study authors notified the FDA about their findings on heart risks. Their findings are similar to the FDA's review of a randomized clinical trial of 700 smokers that found slightly more heart problems in the Chantix group than those taking the placebo.

In June, the FDA added a warning that Chantix "may be associated with a small, increased risk of certain cardiovascular adverse events in patients who have cardiovascular disease."

Singh said he hesitates to prescribe Chantix to his patients. Smokers already have cardiovascular risk, and he said the drug appears to amplify that danger.

"Unfortunately, this is not the magic pill," said Singh, adding that other options such as counseling, nicotine replacement or the drug bupropion exist for smoking cessation.

Chantix works by blocking nicotine receptors in the brain, so cigarettes become less enjoyable and the desire to keep smoking is reduced.

Today, almost 2,000 cases are pending in the federal court system that blame the drug for neuropsychiatric effects.

About a third of the cases were suicides or attempted suicides, said Ernest Cory, lead counsel for the plaintiffs. More than half of the cases involve conditions such as depression, chemical imbalance and neuropsychiatric injury. About 10% involve seizures or blackouts, he added.

A lawsuit filed in May blames Chantix for a murder-suicide of a Beaver County, Pennsylvania, man who shot his wife, then later killed himself, according to local media reports. In another case, a woman four days into taking Chantix killed herself in front of her two kids after getting into an argument over a peanut butter sandwich, Cory said.

The question remains how plaintiffs and families can pinpoint Chantix as the cause instead of other factors in a person's life. Studies show that depression is higher among smokers and nicotine withdrawal could affect mental health.

"Does it happen to everybody?" Cory said about psychiatric problems from Chantix. "No, but to a subset of people, this is a real serious risk related to the use of the drug."

There's a theory of challenge and rechallenge, he said. Patients are given the medication, and if they behave one way, they are taken off the drug to see if the behavior continues or stop.

Pfizer said in a statement: "There is no reliable scientific evidence establishing that Chantix caused the behavior or conditions alleged in these cases."

"All medicines have benefits and risks, and patients who wish to use Chantix to stop smoking should discuss with their physicians whether the medicine is appropriate for them," the company stated.

According to Pfizer, 44% of Chantix users quit smoking three months of treatment compared to 18% on the placebo. In the Canadian journal, the authors cite a statistic that only one person out of 10 will have successfully quit smoking a year after beginning to take Chantix.

After smoking a pack a day and going through various self-help books and nicotine patches, Lawrence turned to Chantix last summer.

Within a week, the thought of smoking -- a habit she had since she was 16 -- repulsed her.

"It just tasted nasty," she said. "It was like smoking a burning rope."

The drug took away the joy of smoking, which is exactly what the Portland, Oregon, resident wanted. But it also took away enjoyment in other aspects of her life.

Lawrence woke up crying in the morning for reasons she couldn't explain. She felt depressed, anxious and snapped at people.

She stopped taking the drug and retried the regimen on a lower dosage. But the depression returned.

When asked if she would recommend it to friends who are trying to quit smoking, Lawrence said, "I would tell them to go for it because it works. I would tell them about my experience. I never felt suicidal, but I was definitely not right in my head somehow."

"Parts of it worked so well," she said about the drug. "They got a part of it right. I wish there was something to counteract the side effects, because it was severe."