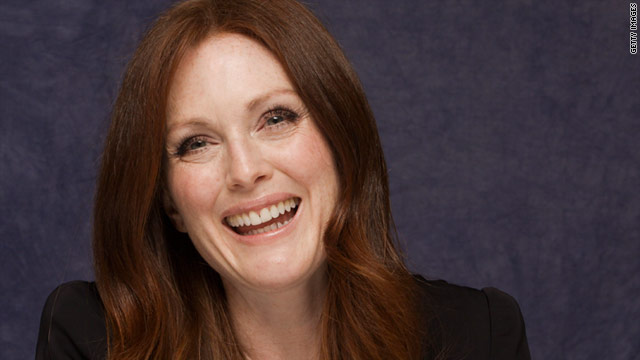 "I think if I have any strength, it's the ability to read scripts well," Julianne Moore says.
STORY HIGHLIGHTS
RELATED TOPICS

(Health.com) -- At a photo studio in downtown New York City, Julianne Moore is heard before she is seen -- her ringing laugh fills the room.

Then the four-time Oscar-nominated star strides over with her hand out as the crew convulses with laughter at a joke she just cracked.

It's no surprise that Julianne is known as one of the most well-liked actors on any set. Brainy, forthright, warm, she's part glam actress, part empathetic girlfriend, and part hip Seven Sisters professor.

After changing into a striped T-shirt and slim cargo pants, she sits on the couch, kicks off her clogs and gathers her famously lush red hair into a topknot. All the while, she's peppering me with questions (not normally the habit of someone famous -- trust me). At 50, she has the lustrous skin and lithe body of someone decades younger -- thanks not to the surgeon's knife, but to a lifetime of healthy habits.

Health.com: 7 steps to defy your age inside and out

Julianne stars in this month's smart comedy "Crazy, Stupid, Love." She plays Steve Carell's wife, who sends him into a tailspin after she has an affair and wants out of the marriage. (Her own home life is much more content: She lives in the West Village with her husband, director Bart Freundlich, their son, Caleb, 13, and 9-year-old daughter, Liv.)

She has been a New Yorker for decades after a peripatetic childhood in a military family (father Peter was an Army judge; her late mother Anne, a psychiatric social worker). A mid-'80s stint on "As The World Turns" led, famously, to film superstardom.

Over a leisurely afternoon, she divulges her thoughts on cosmetic surgery, which workout is "agony," and how she really feels walking the red carpet.

Well, first and foremost, Steve Carell. I love him, and he's so gifted: His sense of timing and the quality of his humor and the depth of it. He grounds everything emotionally.

And the script is delightful, and super, super funny. It's about people who have been married for 25 years, and it's all kind of falling apart, and what happens in a relationship with its ups and downs.

Q: Are you more drawn to comedies these days?

Oh my God. [Puts head in hands.] The older you get, I think, the less appealing tragedy becomes.

Life is hard, and life is sad, and it's challenging, and I think that all the burnish that tragedy has when you're 22 -- it really is different when you're 50. You're really kind of like, "You know, I think I'd rather laugh."

Q: You have a great track record with films. Do you have a good gut feeling, or are you psychic?

I think if I have any strength, it's the ability to read scripts well. There have been scripts that I've read -- like "Boogie Nights" -- and said, "This is brilliant." "Far From Heaven" was that way, "The End of the Affair," "The Kids Are All Right."

Q: What do you do to feel confident on the red carpet?

I never feel confident! I don't know that there's anybody who does. I mean, you don't look around the red carpet thinking, There's a lot of confident people out here.

Q: Still, you look amazing --your hair is shiny, your skin glows.

Let me tell you something: The big thing about being 50 is the bar is much lower. People are like, "Oh my God, you look great!" So that's sort of good. [Laughs.] I have very strong hair, that's just genetics. And I credit my mother for keeping us out of the sun.

Q: You seem so comfortable with your body on screen. Are you? How have you managed not to be neurotic in such a merciless industry?

Look, I think we're all neurotic. I mean, you know, to be totally honest, I just came back from vacation, where I was at a breakfast buffet, and I'd eat pastry after pastry after pastry. So as a consequence, today when I have this photo shoot, I'm like a few pounds over what I'd like to be, and I'm just like, "Oh, crap."

So yeah, I do think about that kind of stuff. But I try to keep things in perspective somewhat, too.

Q: How do you instill a good body image for your daughter?

I think the idea is to provide healthy foods, and let them have a treat. And it's worked. Both of my kids are really active, and they're good eaters, the kind of kids who will take an ice cream cone and say, "I'm finished," and throw it away. I'm like, "I'll eat that." [Laughs.] That's my problem.

Health.com: Secrets to a stress-free family

I do Ashtanga yoga three times a week, and I run a couple of times a week, too. I really like yoga; I enjoy the actual doing of it, so it doesn't feel like the agony of the gym felt like to me.

Q: What was agony?

Q: As I understand it, your stand on cosmetic surgery is ...

My feeling is live and let live. But some of those procedures that make you look younger -- I don't know that they really made anybody look younger. I think most of the time they made you look like you've had something done to your face.

Even with the laser stuff, the skin becomes so shiny. It's like nothing sticks to it. It's just shiny, shiny skin, and it doesn't have a normal patina, so you're like, "What's the matter with them?" Look, it's hard to age. Let people do what they want to do, but I do think that a new normal sometimes starts to exist where the cosmetic surgery itself starts to look normal, and we lose track of what a real face is like.

Q: You joined the advisory council of the Children's Health Fund. Why are you drawn to this cause?

When I was a kid, I moved all over the country, and the thing that really struck me is that a lot of us are under the illusion that we all get a fair shake growing up in this country, and it was pretty clear to me at an early age that you don't.

To be poor in this country is to kind of hide in plain sight. Health care is very uneven in places where there are just no doctors and no hospitals. And the Children's Health Fund has wonderful mobile-health units, which go to those areas.

Q: You've been with your husband, Bart, for 15 years. What's special about him?

He's a great cook. And he's incredibly sensitive to other people, to the emotional temperature of a room. He's very, very sensitive that way, which is kind of extraordinary, and really unusual in a man, I think.

Q: Let's talk about stress. Do you have any left-field ways to beat it?

I fold laundry. I understand that. I don't feel relaxed if things are messy in my house. I have to make the beds, I have to do the dishes. And if there's clutter, I love to throw stuff out. Love it.