Antidepressant use in pregnancy may raise autism risk 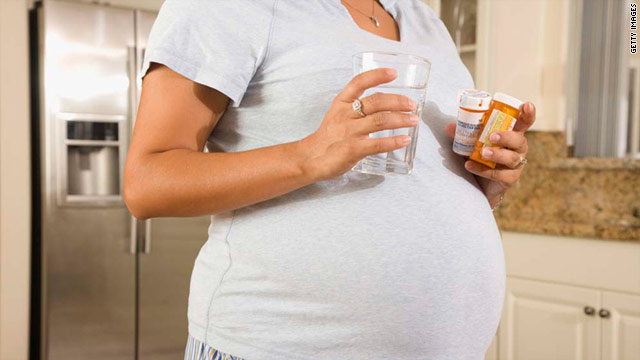 The study is the first to look at the association between the use of antidepressants during pregnancy and the risk of autism.
STORY HIGHLIGHTS

(Health.com) -- Children whose mothers take Zoloft, Prozac, or similar antidepressants during pregnancy are twice as likely as other children to have a diagnosis of autism or a related disorder, according to a small new study, the first to examine the relationship between antidepressants and autism risk.

This class of antidepressants, known as selective serotonin reuptake inhibitors (SSRIs), may be especially risky early on in a pregnancy, the study suggests. Children who were exposed to the drugs during the first trimester were nearly four times as likely to develop an autism spectrum disorder (ASD) compared with unexposed children, according to the study, which appears in the Archives of General Psychiatry.

The study included fewer than 300 children with a diagnosed ASD and does not prove that taking SSRIs during pregnancy directly causes ASDs, which affect approximately 1 percent of children in the U.S. The findings will need to be confirmed in larger studies, and should not dissuade women from starting or continuing to take SSRIs, experts on prenatal drug exposure and mental health say.

Health.com: Signs you should stop, adjust or switch antidepressants

"Poor maternal mental health during pregnancy is a major public health issue," says Tim Oberlander, M.D., a professor of developmental pediatrics at the University of British Columbia, in Vancouver. "Nontreatment is not an option. While some children might be at risk from an SSRI exposure-and we don't know who, and how that works-there are many mothers and their children as well who will benefit."

The lead author of the study, Lisa Croen, Ph.D., the director of autism research at Kaiser Permanente Northern California, a large nonprofit health plan based in Oakland, emphasizes the preliminary nature of her team's findings. "This is the first study of its kind to look at the association, and the findings have to be interpreted with a lot of caution," she says. "We can't detect causality from one study."

Untreated depression during pregnancy carries its own risks, such as preterm birth and growth problems, Croen adds, and "the potential risks to the child really have to be balanced with the risk to the untreated mom. We don't want people to rush off and stop taking antidepressants if they're on them. They really need to talk to their doctors about the risk-benefit ratio."

Max Wiznitzer, M.D., a pediatric neurologist at Rainbow Babies & Children's Hospital and an associate professor of pediatric neurology at Case Western Reserve University School of Medicine, both in Cleveland, says the study is too small to draw any conclusions. The study is a "signal," he says, "but with a really small group."

Using Kaiser Permanente's patient database, which includes more than 3.2 million people, Croen and her team identified 298 children with an ASD who were born between 1995 and mid-1999, and matched them with 1,507 children without autism who were roughly the same age and were born in the same hospitals.

The authors then cross-checked whether their mothers, in the year before delivery, filled prescriptions for an SSRI, including Prozac, Zoloft, Luvox, Celexa, and Paxil (or their generic versions). The researchers could not confirm whether the mothers actually took the medication, however.

Twenty of the children with an ASD (or 6.7 percent) were exposed to SSRIs in the womb, compared with 50 (3.3 percent) of the control children. After taking into account other factors that could affect both autism risk and SSRI use (such as the mother's age, ethnicity, and history of depression or other mental illness), the researchers found that any exposure to the drugs in the womb increased the risk of ASD diagnosis 2.2-fold, while first-trimester exposure increased the risk 3.8-fold.

Roughly 12 percent of the mothers whose children had an ASD were diagnosed with depression or another mental disorder. Previous research has reported an increased risk of autism in the offspring of mothers with mental disorders, but the new study did not find such a relationship in mothers who did not also take SSRIs.

Slightly more than 2 percent of all autism cases among children born in the late 1990s could be attributed to SSRI exposure, Croen and her colleagues estimate. That percentage might be higher today, Croen says, because SSRI use during pregnancy has become more common. A large 2005 study found that 6.5 percent of pregnant women were taking the drugs.

Croen and her colleagues thought to investigate a possible SSRI-autism link for two reasons. First, the rise in autism rates over the past several decades-which may be due to better awareness and diagnosis, rather than a true increase in cases-has roughly paralleled the growth of SSRI use during pregnancy. (The first SSRI, Prozac, was approved in the U.S. in 1987.)

Second, evidence from previous studies suggests that people with autism have abnormalities in their levels and regulation of serotonin, a brain chemical involved in mood and numerous other biological processes. SSRIs are thought to increase the availability of serotonin in the brain, and since the drugs pass through the placenta, they could conceivably influence the development of a baby's serotonin system.

In animal studies, changes in serotonin levels during pregnancy have been shown to have "downstream effects" on the development of the fetus and offspring, says Oberlander.

If similar effects occur in humans, they may vary depending on a child's genetic makeup, adds Oberlander, stressing that the vast majority of children in the study who were exposed to SSRIs in the womb did not develop autism. "There are many children who have prenatal SSRI exposure who are really quite resilient, and I think part of our job is to figure out who's at risk and who's not," he says.

The Food and Drug Administration (FDA) has assigned most SSRIs a "C" grade for safety during pregnancy. When given at high doses, drugs in this category have been linked with birth defects in animal studies, but they have not been proved safe or unsafe in humans because few studies have been conducted. Pregnant women should use them "only if the potential benefit justifies the potential risk to the fetus," according to the FDA.

Nouchine Hadjikhani, M.D., an ASD expert and associate professor of radiology at Harvard Medical School, in Boston, urges pregnant women to err on the side of caution. Animal studies provide strong evidence that exposure to high levels of serotonin in the womb produces autism-like behaviors and changes in brain structure, she says.

"I think one has to be aware of the potential risks of having these types of drugs during pregnancy, and really think twice before allowing them during pregnancy," says Hadjikhani, author of a 2010 paper speculating that excess serotonin levels in pregnancy due to SSRI use could be behind the rise in autism rates.