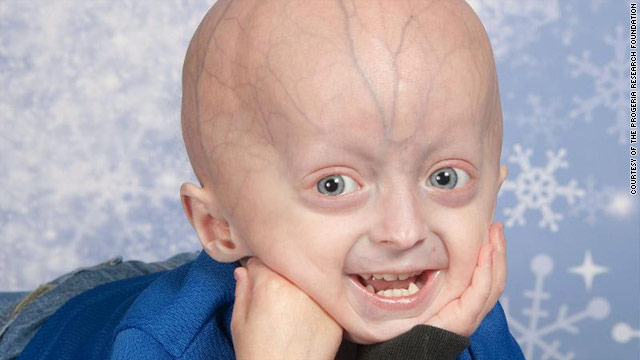 Standing 3 feet tall, Meg didn't look like her peers. Bald and skinny, her body was aging rapidly because she had a rare genetic disease called Hutchinson-Gilford progeria syndrome.

People with progeria wrinkle and develop the same circulation and joint ailments as the elderly -- except most of them die by age 13.

Progeria affects 200-250 children worldwide, but research into the disease could offer clues on cellular function and how it affects human aging and other age-related diseases.

This week, a study about a possible treatment was published in Science Translational Medicine. Dr. Francis Collins, director of the National Institutes of Health, is one of the authors.

About 30 years ago, Collins, then a young Yale University doctor, met Meg. He realized there was little he could do for his patient, but he couldn't look away.

"It was compelling to try to understand why someone's body is melting away in the ravages of age," he said. "You couldn't be involved without marveling at it and wanting to do something to understand the situation."

Collins offered his concern and compassion, but there was no treatment for her disease.

Despite her grave prospects and appearance, Meg did not shy away from the public eye. Instead, she became an outspoken advocate for disabled people in Milford, Connecticut.

Long before it became customary to do so, "She got that town to become friendly to the disabled," Collins said. "She made it happen."

Just because she was diminutive, it didn't mean people could step all over her. Meg could also "curse like a sailor" in her birdlike voice, he said.

Meg Casey died in 1985, but she never faded from the doctor's memory. 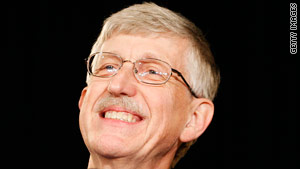 Collins' role as a geneticist is to decode the most complex puzzles of human life. He is best known as a leader of the Human Genome Project that mapped and sequenced the human DNA.

The mystery of progeria remained one of his interests. Collins and seven others are authors of a study that found an immune suppressing drug, called rapamycin, could possibly treat progeria.

There have been no approved drugs or treatment to slow the course of the disease.

Children with this rare genetic condition lose their hair as infants, while they're learning to talk. Their minds develop normally, but their bodies age rapidly.

As toddlers, their skin begins to wrinkle and sag. Most of them die of age-related causes, like heart disease, heart attack or stroke, before they start high school.

The cause: A single letter in a progeria patient's genome is out of place. This genetic defect causes the child to accumulate too much of a toxic protein called progerin and the cells can't get rid of it.

"Cells have a normal way of removing byproducts," said Dr. Dimitri Krainc, an author in the study. "You accumulate trash and you take it out. That's what happens in cells. As they work, they start accumulating byproducts. There has to be a system to remove those byproducts."

Progerin is seen in small amounts in healthy people's cells as they begin to age. The difference is that healthy cells can get rid of the damaged molecules and unneeded proteins.

The researchers chose to test rapamycin on cells from progeria patients because research suggested its effectiveness in extending the lives of mice. Rapamycin is an immune-suppressing drug given to transplant recipients to prevent organ rejection.

"When you treat them with rapamycin, it looks normal," he said. The drug appeared to activate a cellular system that removes the waste.

"Rapamycin or similar drugs of that same class are capable of revving up that cleanup system," Collins said.

But the drug comes with major risks because it raises cholesterol levels and suppresses the immune system, making patients more vulnerable to infections. Rapamycin was derived from bacteria found in the soil of Easter Island in the 1960s.

The results of the progeria study triggered discussions about a potential human clinical trial.

"I can't say what the drug will do before clinical trial," Krainc said. "We're very hopeful, because of the dramatic effect (in cells) was replicated."

Some scientists hypothesize that the cell's inability to dispose of unnecessary protein as humans age is what could lead to severe illnesses.

"This is a fundamentally important pathway by which cells maintain their own health," Collins said. "Yet as we age, we don't do it quite as well and the buildup starts to happen."

The Progeria Research Foundation, a nonprofit that supports affected families and promotes scientific research on the disease, supplied tissue and cell samples for the study.

Dr. Leslie Gordon, the foundation's medical director and a mother of a boy with progeria, said scientists are considering the use of RAD001, a modified version of rapamycin that has fewer side effects in a potential human trial.

"Nothing is in place," she said. "These things take instructional and federal scrutiny. We're considering this based on this very study."

Drug development favors common diseases that could lead to blockbuster medications. This leaves patients and families of orphan diseases with little support or medical options.

"The first thing that we discovered after my son was diagnosed was there was nothing out there to help researchers to do research -- no cells or tissue, no clinical information bank, no outreach for families," said Gordon. "There was nothing to work with."

The foundation established a cell and tissue bank and started efforts to identify more progeria patients. It is involved in a different clinical trial involving a three-drug cocktail to treat progeria.

It hasn't been easy trying to bring attention and resources to a rare disease, Gordon said.

"For all the times people could not help, there are people like Francis (Collins) who say yes," Gordon said. "When we approached him, it was the fact that he cared and the fact that it bothered him that we didn't have the answer."

"They're taking what most of us look at as a really discouraging situation and saying, 'No, darn it. I'm going to make the most of it. If I have a shortened time being here, I'm not going to waste it feeling sorry for myself.