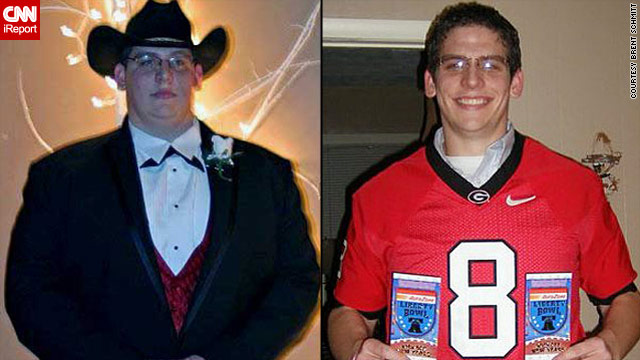 (CNN) -- At his heaviest, Brent Schmitt weighed 419 pounds. Even at 6 feet 3 inches tall, that was very overweight and he had high blood pressure.

Many people in his family -- aunts, uncles and grandparents --suffered from diabetes, high cholesterol, heart disease and high blood pressure.

The iReporter's life-changing moment came during an intense family discussion back in 2009 about his relatives' ailments.

It finally clicked for him: It was time for him to take a different path.

"If I didn't do something about my health, then I was concerned I'd never live long enough to get married and have children or be healthy enough to spend quality time with my future family," the Evansville, Indiana, man said.

Starting a family is important to this 27-year-old civil engineer and he didn't want to miss out on this opportunity, or the chance to lead a healthy life. 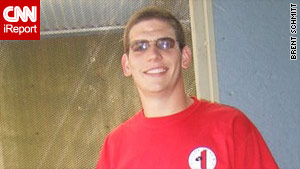 Schmitt reduced his food portions and avoided processed foods during his weight loss.

Schmitt jump-started the first six months of his weight loss journey back in July 2009 by reducing his food portions. He would use a smaller dinner plate than in the past and fill it with what he wanted to eat. Once he had done this, he would take half the food off his plate and just consume that portion.

As part of his diet, Schmitt avoided processed foods.

"I tried to buy fresh fruit and vegetables every three days, along with lunch meat sliced from the deli section of my local grocery store," he noted.

Schmitt focused on moving more, too. During the first six months of his weight loss plan, he made the daily choice of moving his body more than he had in the past. He would do little things like take the stairs rather than the elevator - or head to the copy machine after printing a work document, instead of letting his copies stack up.

Once he hit the six-month mark of his lifestyle change, he added more rigorous activity to his daily routine, like using the treadmill. At first, he just walked on the treadmill, but over time he picked up his pace and started to run.

In October 2010, he reached a milestone, running the Evansville half-marathon in less than two hours.

It was a lifestyle change for me, and not a fad diet or surgery that caused me to lose so much weight.
--Brent Schmitt

"At first I was in disbelief that I finished, and then I was relieved and proud of myself for achieving a difficult goal," he said.

He now makes a point to take the longest route possible when walking somewhere in order to get more exercise.

"It's everyday choices like these that help me lose weight," he added.

It took Schmitt about six and a half months to lose his first 100 pounds and then he shed the last 77 pounds over the next eight and a half months. He hopes to eventually reach his goal weight of 230 pounds.

Dr. Melina Jampolis, CNNHealth's Diet and Fitness expert who's a physician nutrition specialist who practices in Los Angeles and San Francisco, California, said Schmitt has shed his weight in a safe and effective manner and she salutes him for making smart choices.

"He didn't do any crazy diets or jump into a crazy exercise schedule - and he focused on proper nutrition," Jampolis said. "His story just proves that in real life, if you make small choices like these day after day, it can end with tremendous results."

Schmitt's family doctor, Dr. Michael Allen, said he was comfortable with the pace of the weight loss, since he was a young male and didn't have major health issues, beyond his high blood pressure. Allen noted if Schmitt hadn't dropped the pounds, he would have been on his way to bigger health problems, including diabetes or possible knee replacement surgery.

Many people who have not seen Schmitt in a long time often do not recognize him, since his looks have dramatically changed. Many will ask him which diet plan he used or if he had bariatric surgery.

"I have to constantly reinforce the fact that it was a lifestyle change for me, and not a fad diet or surgery that caused me to lose so much weight," he added. 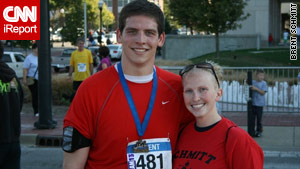 Schmitt shares a hug with fiancée Jaclyn Foote, after finishing his half-marathon race.

Schmitt credits his family and friends for supporting him through his "lifestyle change." He says on days when he felt like he was struggling, they would remind him of his progress and how proud they were of him.

"They encouraged me to keep going," he said.

Schmitt said his family members, with their various health issues, have closely watched his transformation, and he hopes his new healthy life will inspire them to make their own changes one day.

Schmitt's goal of starting his own family is on track, too. In mid-June, he became engaged and plans to marry his fiancée in November 2012.

"Life is good for me right now and the future is bright," said Schmitt. "I feel healthier, have more energy, more self-confidence and feel as though I have accomplished something really great."