10 exercise myths that won't go away 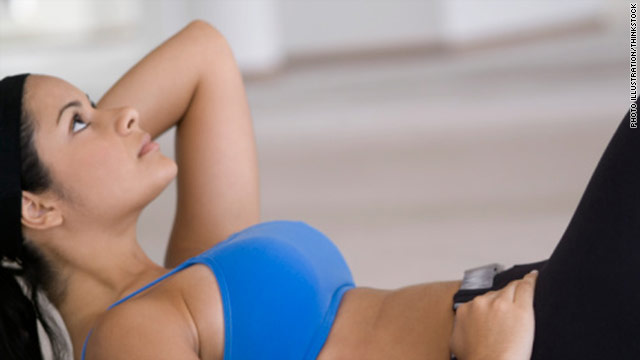 Spot reducing fat is a myth. Unless you tackle your body fat, your ab crunches may not help.
STORY HIGHLIGHTS
RELATED TOPICS

(CNN) -- We're all looking to maximize results while minimizing time and effort in the gym. That search for shortcuts has translated into a lot of myths about exercise.

CNN.com asked exercise physiologists, trainers and nutritionists about their most hated exercise myths.

Consider these the 10 persistent myths of fitness.

10) Your cardio machine is counting the calories you're burning.

"It doesn't mean anything," said Mark Macdonald, personal trainer and author of "Body Confidence" about the calorie numbers spit out by the cardio machine.

Some machines don't even ask for your weight or sex.

And how many people know their body fat percentage?

The number calculated by your machine is likely not accurate.

This one drives Alice Burron, a former female bodybuilder, crazy. She would spend four to five hours a day when she competed, trying to build muscles.

"You really have to overload those muscles to create bulk," said Burron. "It's very, very difficult."

Women have too much estrogen to build large amounts of bulk. Guys build muscles faster because they have testosterone.

The government's 2008 Physical Activity Guidelines for Americans recommended muscle-strengthening physical activity on at least three days of the week for kids and two or more for adults.

8) Heart rate monitors will let you know how hard you're working.

The better detector of how hard you're working is not the newest, gee-whiz tech device, but your own body.

"The perceived exertion, your own sense of how hard you're working is a much more reliable of exercise intensity," said Matt Fitzgerald, senior editor of Competitor group.

Perceived exertion means it's your estimation of how hard you are working out and surprisingly, it's very accurate, he said.

"Your perception of your limit can change over time. So yeah, even your own perception isn't perfect. It's still better than heart rate monitor," Fitzgerald said.

Heart rates could falter depending on what kind of exercise you're doing.

The talk test can measure how intensely you're working out depending on whether you can talk in full sentences, short phrases or if you're barely able to muster a few words.

"It's best to learn to recognize your body's signals and get a better control of your effort," said Alex Hutchinson, author of "Which Comes First: Cardio or Weights."

Newbies hit the gym, and then weigh themselves every day on the scale.

Week-after-week, they see nodownward trend on the scale and get impatient.

People starting saying, "I haven't lost any weight. This is pointless, I'm not accomplishing anything," said Hutchinson.

After a few months of increased exercise, they are healthier because they've reduced risk factors such as blood sugar levels. Even though a person may not be losing weight, his health has improved in ways that might not be measured.

"They're stuck in this paradigm that weight is the ultimate barometer for fitness. They don't realize the progress they've made and give up."

In general, low intensity exercise has its place -- it's less stressful on joints.

The myth is that if you exercise too intensely, you end up burning carbohydrates instead of fat.

It's the most dangerous type of myth because there's a kernel of truth in it, Hutchinson said.

The more intensely you exercise, the higher proportion of carbs you burn. You may burn less fat, but the total amount of calories burned is higher and that is the bigger picture.

When your body has burned up all the carbs, it starts burning fat.

"You can ignore zones and pay attention to how many calories you burn, which ultimately determines how much body fat you're going to lose," Fitzgerald said.

5) Chug a protein shake after workout.

"It's eating another meal," said Macdonald, a personal trainer who helped TV host Chelsea Handler get in shape.

Protein shakes, powders and bars are good for emergencies, but "they're the lowest quality food."

"You're better off eating real food," he said.

The products are more processed. The best way to get protein is through foods such as a turkey sandwich, Greek yogurt with nuts and fruit.

Martin Gibala, chairman of the department of kinesiology at McMaster University in Hamilton, Ontario, agrees. "Protein sources in real food are Number 1. Cheaper and real food may provide other benefits, vitamins and minerals. And some of the components in food may act synergistically in ways we don't understand."

"When we isolate the compound we think works, it's not as good as the real foods."

4) You can spot reduce for tight abs or toned arms.

You may have crunched in vain.

You won't see muscle definition or a nice six-pack despite how many crunches you do, because of the layer of fat resting on top of your muscles.

"Don't focus on a body part. Try to get them all," said Burron, a spokeswoman for the American Council on Exercise. "You might have beautiful triceps -- it may not be flopping all over the place. Until the fat is gone, most people wouldn't know it's there."

Also, emerging research suggests that if you're sedentary most of the day, it may not matter how hard or often you exercise.

People who spend more time sitting during their leisure time have an increased risk of death, regardless of daily exercise.

Sitting for hours can shave years off life

In a study of more than 123,000 healthy people, the American Cancer Society found that women who spent more than six hours a day sitting were 40 percent more likely to die sooner than women who sat less. Men who sat more had 20 percent increased risk of death.

Essentially, those who sit less, live a longer life than those who don't.

"The ongoing perception is that people need to feel pain through the entirety of their workout or they're not getting the benefit -- that one's very frustrating to me," said Burron, a personal trainer. "You shouldn't be exercising at a level of pain ever."

Feeling discomfort during a workout is OK.

"If it's so intense you're thinking of passing out, you can't continue this session for longer, then it's too difficult and you're at increased risk for injuries or burnout," Burron said.

"You want to exercise smarter, not harder," she added. "That's the premise. You don't have to kill yourself. You just have to be smart about it."

"The way we were taught to stretch, to try to touch your toes -- there's little evidence it prevents injuries," Hutchinson said.

A review published in 2007 of 10 randomized studies about stretching after or before physical activity found that "muscle stretching does not reduce delayed-onset muscle soreness in young healthy adults."

Static stretching is when you stay in place, bend over to touch your toes, or try to pull your ankles towards your hips.

A study presented this year at the American Academy of Orthopaedic Surgeons found that such static stretching before a run neither prevents nor causes injury.

Then a study published this month in Medicine & Science in Sports & Exercise found that static stretches that last longer than a minute could be detrimental to performance.

Athletes often swing their arms and warm up before a game. That type of dynamic stretching such as high knee jogs, walking lunges can help move your muscles through different ranges of motions.

This type of dynamic stretching is different from clutching your limbs, because it focuses on movement.

A study published in the Journal of Strength & Conditioning Research found professional soccer players who practiced dynamic stretching had higher range of motion than when they practiced only static stretches.

While toe-touches and extra flexibility might be required in gymnastics or figure skating, it's irrelevant for more everyday activities like basketball or weightlifting.