Surgery is no quick fix for obese teens 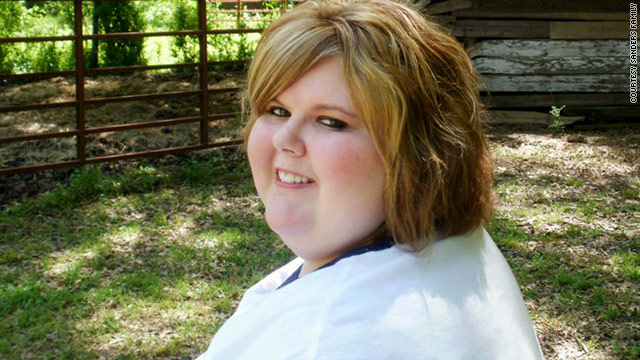 Brandy Sanders, 19, who once weighed 383 pounds, has lost 33 pounds since her surgery in February.
STORY HIGHLIGHTS
RELATED TOPICS

(Health.com) -- At 16, Shaina weighed 242 pounds. She also had developed a complication of obesity in which pressure builds up within the skull, damaging the optic nerve.

The only solution for Shaina, who had already started to suffer vision loss, was to lose weight -- fast.

"Even though I lost 20 pounds on my own, I needed to lose like 50 pounds," Shaina says.

A doctor recommended bariatric surgery, and Shaina had the procedure in February 2011. Three months later, she is down to 184 pounds -- the first time she can remember weighing less than 200 -- and has gone from a size 20 to a 12.

"I had to get a whole new wardrobe," she says.

More young people like Shaina, who are obese and often suffering from serious health complications, are undergoing operations to help them lose weight. While fewer than 1,000 teens have the surgery in the U.S. each year (versus 200,000 to 250,000 adults), it is becoming more common among adolescents as obesity rates continue to rise.

"There's certainly more and more cases done every year, and unfortunately we're likely going to continue to go that route," says Shaina's doctor, Evan Nadler, M.D., the director of bariatric surgery and codirector of the Obesity Institute at the Children's National Medical Center, in Washington, D.C.

Success stories like Shaina -- and those of celebrities like Al Roker and Star Jones -- might make bariatric surgery look easy. It's not. In fact, doctors are so concerned that teens might have unrealistic expectations that they require extensive presurgery evaluation and lifestyle changes to ensure that teens understand the serious risks, are dedicated to overhauling their health, and don't take the procedure lightly.

Surgery usually requires preliminary weight loss and then a strict postsurgical regimen of dietary changes, vitamins, and exercise. If the teen and his family aren't fully committed, the results can evaporate quickly or fail to materialize in the first place.

"We worry a lot if we have a child who thinks the surgery is going to be a magic fix," says Eleanor Mackey, Ph.D., a clinical psychologist at the Obesity Institute at Children's National Medical Center, who evaluates young people considering the surgery.

Not a cosmetic procedure

Bariatric surgery is not for the moderately overweight. Although there are no consensus national guidelines for bariatric surgery for adolescents, doctors generally follow the same national guidelines for adults: The patient should have a body mass index (BMI) of 40 or higher (for example, someone 5'4" would have to weigh at least 233 pounds to qualify), or a BMI of 35 (a weight of 204 for someone 5'4") or greater with serious obesity-related health problems, such as type 2 diabetes.

"This is not a cosmetic procedure," says Marc Michalsky, M.D., surgical director for the Center for Healthy Weight and Nutrition at Nationwide Children's Hospital, in Columbus, Ohio. "Most of these kids are actually quite sick, and they feel quite sick."

Health.com: Obese children, teens have the arteries of 45-year-olds

Doctors usually don't perform the surgery on children until they have gone through puberty and have stopped growing. This is because there could be increased likelihood of a nutritional or vitamin deficiency after surgery, which could hinder bone growth and sexual maturation, Michalsky says.

In addition, a young person must have the psychological maturity and family support to make permanent lifestyle changes, explains Thomas Inge, M.D., the surgical director of the Surgical Weight Loss Program for Teens at Cincinnati Children's Hospital Medical Center.

"Two to three months are needed to really get to know the family and make sure the child really knows what they are getting into," Inge says. (The surgery may also require financial support: Many families pay out-of-pocket for the procedure, which usually costs between $10,000 and $20,000, although insurance companies do sometimes agree to cover it.)

Health.com: How to get your insurance company to pay for a denied claim

Doctors can evaluate whether a patient has made sufficient changes by tracking her weight and performance in a quarter-mile walk test, Inge adds.

"We really look to make sure that kids are interested in the surgery, that they're not just being pushed into it, [and] that they have some understanding of what they're going to have to do to make sure their surgery is successful," Mackey says.

The post-surgery recovery is no picnic. Patients stick to a liquid diet for weeks and then gradually phase in solid food.

"My body was different day to day," recalls Michelle Montanti, 19, who had the procedure when she was 15 and weighed 250 pounds. She has since lost 110 pounds. "One day I could tolerate mac and cheese; the next day I was throwing up. It's a really hard transition."

Shaina can still eat only soft food or food that has been mashed up. Bariatric surgeons like to say that the surgery is just a tool, not a magic bullet. Multiple follow-up visits with the surgeon and support team are required in the first year, and in order to get results from the procedure, young people must be committed to becoming more active and eating healthier for life, which often requires getting their families to do the same.

"You really have to learn the difference between listening to your stomach and listening to your head," says Montanti, who is attending culinary school and aspires to make cooking and nutritional videos for other bariatric surgery patients. "You have to retrain your body how to eat."

Because bariatric surgery limits the amount of food patients can eat, adequate nutrition after surgery is important. Teen and adult patients alike need to take vitamins and minerals following surgery, in some cases for the rest of their lives. Iron is a common deficiency that puts patients at risk of anemia.

Malnutrition is a major concern for patients who undergo a type of bariatric surgery called gastric bypass, in which part of the stomach and small intestine gets bypassed, says Nadler.

"If bypass patients stop taking multivitamins, it can result in life-threatening malnutrition."

In fact, because of the risk, Nadler performs only the other two types of weight-loss surgery -- gastric banding and sleeve gastrectomy, in which surgeons remove a large portion of the stomach. These types are less common than gastric bypass, but sleeve gastrectomy -- the surgery Shaina had -- is gaining in popularity, Nadler says.

In addition, patients have to follow other diet rules, especially in the months after surgery, to avoid malnutrition, dehydration, and weight gain. These include eating regular, high-protein meals and not drinking liquids close to mealtime.

Starting an exercise program is equally important for post-surgery weight loss. Brandy Sanders, 19, who weighed 383 pounds when she had surgery in February 2011, has been exercising with her mother for two hours a day.

"Before I had the surgery, I could do seven minutes on the treadmill and I almost died," she says. "Yesterday I did 30 minutes and I was just huffing and puffing a little bit."

"It would still be a lot more than I should weigh, but it would be a lot better than what I started out with," she says.

Sometimes just the process of preparing for surgery is enough to trigger serious lifestyle changes that can help teens avoid it. Although bariatric surgery is much safer since it was first introduced in the late 1960s, it does carry a risk of side effects and serious complications -- such as stomach leakage (after gastric bypass and sleeve gastrectomy) and malfunctioning gastric bands -- that can require corrective surgery.

Plus, there is little data on the potential long-term risks of bariatric surgery in adolescents. A recent study did show that young people lost bone mass after gastric bypass. (Inge and his colleagues don't see this as a major concern, given that these patients started out with a much higher-than-normal bone density.)

However, teens need to have their bone density checked annually for at least 10 years after surgery to make sure it's adequate, says Inge, who is currently recruiting teens for a 10-year study of bariatric surgery patients. Some extremely obese teens find presurgery prep can even change their lives for the better.

Josh Caudill, a high school senior in Austin, Indiana, weighed 472 pounds and had tried the Atkins diet, Weight Watchers, and several fad diets when he decided to investigate weight-loss surgery.

"I kept trying and I just couldn't do it," he says. "I was getting [to the point] where walking was hard."

He visited the bariatric surgery clinic at a hospital outside Indianapolis, and the doctors there told him he'd have to lose 40 pounds before he could be a candidate.

He asked one of his teachers, a vegetarian, for diet and exercise advice, and the two began taking regular walks together after school. Within two months he'd lost the 40 pounds, but he decided he wanted to lose more weight on his own.

Caudill has been accepted to Purdue University, and he hopes to be down to 315 pounds by summer.

His father, who also struggles with obesity and recently had a second gastric bypass after regaining the weight he'd lost, urged him to get the surgery, Caudill says.