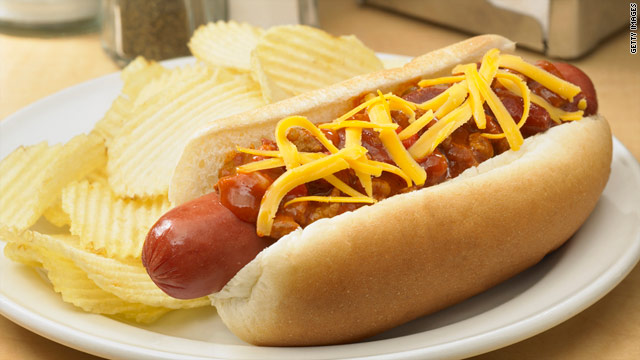 A key message from the study is to steer clear of processed foods, which are often high in sodium and low in dietary fiber.
STORY HIGHLIGHTS
RELATED TOPICS

(Health.com) -- Everyone knows the basic prescription for staving off excess weight gain in middle age: Eat less and exercise more.

But a new study of long-term weight patterns among more than 120,000 adults suggests that some foods and behaviors -- such as potato chips and TV watching -- have a disproportionate impact on our waistlines.

The men and women in the study, who ranged in age from about 33 to 60 and were of normal weight when the researchers began following them, gained an average of 3.4 pounds every four years -- just shy of the 1 pound per year that people typically amass as they age.

The findings contradict the conventional wisdom that people should just eat less of everything to maintain a healthy weight, says lead researcher Dariush Mozaffarian, M.D., an associate professor of medicine at Brigham and Women's Hospital, in Boston.

"It's not 'everything in moderation,'" he says. "There's a myth that there's no good and bad foods. There are foods that are good or bad for different health outcomes."

The study, which appears this week in the New England Journal of Medicine, used data from three large government-funded studies that have followed nurses, doctors, and other health professionals for up to 20 years.

"This is a powerful, large-scale follow-up study, well designed, that shows consistent findings among three cohorts and among nonobese individuals as well," says Iris Shai, Ph.D., an associate professor of epidemiology at Ben-Gurion University of the Negev, in Israel, who has studied long-term weight changes but was not involved in the new research.

Lifestyle factors besides eating mattered, too. For each additional hour of TV they watched a day, the study participants gained an extra one-third of a pound every four years, on average. Sleeping less than six hours or more than eight hours per night were also both associated with more weight gain.

By contrast, those who ramped up their exercise schedule during the study gained as much as 1.76 fewer pounds than expected.

A key message from the study is to steer clear of processed foods, as they tend to be high in sodium, sugars, carbohydrates, and fats, and low in dietary fiber, vitamins, and minerals, Shai says. This "industrial package," she adds, "may lead to less satiety and to more retention of fluids (and) visceral fat, and to increased blood-insulin levels."

Starchy or refined carbohydrates (such as white bread and sugars) are especially problematic, Mozaffarian says, as they can cause insulin and glucose levels to spike.

"In some short-term controlled studies, these bursts in glucose and insulin increase later hunger (and) the total amount of food consumed at the next meal," he explains. "Overall, carbohydrate quality appears to be a key yardstick in the diet for relations with heart disease, diabetes, and now weight gain."

The findings illustrate how easy it can be to let weight creep up on us over time if we don't pay close attention to our diet, but the good news is that "it also works in the opposite direction," says Elizabeth Fassberg, M.P.H., a registered dietitian in New York City.

"If someone is trying to lose weight, they don't need to necessarily go on some drastic weight-loss program and change everything in their lives -- which is almost impossible to maintain for long periods of time," says Fassberg, who did not take part in the new study. "All the person needs to do is make small changes and over time the weight will come off."