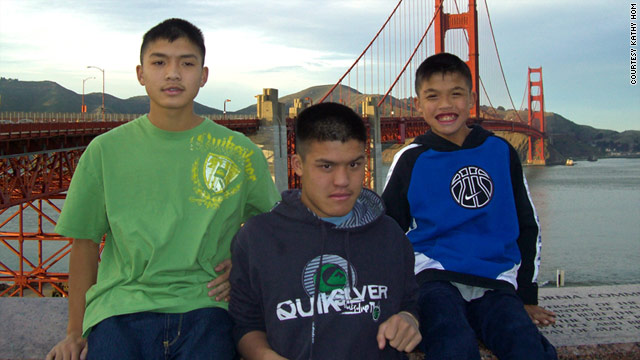 B.J. Hom, center, died of an allergic reaction in 2008. His brothers Brandon, left, and Steven also have susceptibility to allergies.
STORY HIGHLIGHTS

Join us Friday from 1-2 p.m. E.T. for a Twitter chat about food allergies with allergist Dr. Clifford Bassett. Tweet your questions to @cnnhealth with the hashtag #cnnallergy

Brian had no idea those would be the last words he would hear his son say.

The Hom family had just arrived at a resort in Los Cabos, Mexico, to celebrate B.J.'s high school graduation and 18th birthday. But while Brian went to get cough drops at the gift shop, B.J. collapsed, his lips blue and his face pale, gasping for breath. He died that night from an allergic reaction, probably to unnoticed peanuts in a dessert from the dinner buffet.

"It was like someone reached in and ripped our hearts out," said Brian Hom of San Jose, California.

Since then, Hom has been speaking about the dangers of food allergies and educating people about protecting themselves and their children from a possible deadly reaction.

A new study in the journal Pediatrics reaffirms this growing problem of food allergies among young people. Researchers found that 8% of children under 18 in the United States have at least one food allergy. In the past, estimates had ranged from 2% to 8%, adding to the growing body of evidence that increasingly more children have food allergies.

Even more striking, among those with food allergies, about 39% had a history of severe reaction and 30% were allergic to multiple foods. The most common food allergen was peanuts, followed by milk and shellfish.

Child food allergies on the rise

"Sometimes when people think of food (allergies), they think of rash or stomach ache. What I don't think people understand is that it can be life-threatening. You can have a severe reaction and end up in the hospital and even die of food allergy," said Dr. Ruchi Gupta, associate professor of pediatrics at Northwestern University Feinberg School of Medicine and lead author of the study. (Gupta is no relation to CNN Senior Medical Correspondent Dr. Sanjay Gupta.)

Unfortunately, although allergists can identify people at risk for reacting to particular foods, there is no test to determine who is most likely to suffer a severe reaction and who will respond with only mild symptoms. There also is no cure for food allergies; the course of action is to avoid the offending foods and carry an epinephrine auto-injector in case of emergency.

Hom regrets having had a somewhat lax attitude toward allergies in the past.

B.J. had never been tested for food allergies, but he knew from his experience with fish -- and the hives he'd get when eating peanuts -- that he should avoid certain foods. He seemed to manage these relatively mild reactions with antihistamines and did not carry an epinephrine auto-injector.

"We always heard the stories, but we thought every time he'd get a reaction it would be these hives or itchy throat and he'd just feel uncomfortable," Hom said. "We thought, OK, then, we're safe. You don't think it could get to the fatal stage."

After B.J.'s death in July 2008, Hom had his other sons, Brandon and Steven, tested for food allergies. They both tested positive for peanut allergy, which may have explained why Steven broke out in hives after eating the same dessert from the buffet that led to his brother's death.

"For a child with food allergies, it's almost a nightmare to be at a buffet," Gupta said. There's no telling what ingredients are in the foods, or whether they've had contact with allergens in the kitchen, or even if the serving implements have had contact with various offending foods, he said.

The Homs make sure to have an epinephrine auto-injector around all the time for Steven, who is now 15. But Brandon, 18, says he doesn't need to carry one, because he had no reaction to an oral test for peanut allergy.

B.J.'s experience also reflects a trend, shown in Gupta's research, that children experience more severe allergic reactions as they get older. Gupta believes that's not because the allergy itself is getting worse, but rather because parents are less able to monitor their children's eating habits as they get older and become more independent. Food allergies even make kids a target of bullies.

"Teenagers find it 'not cool' to carry an auto-injector," said Dr. Clifford Bassett, director of Allergy & Asthma Care of New York and member of the public education committee for the American College of Allergy, Asthma and Immunology. There's a sense of embarrassment associated with food allergies for teens in particular, especially when they have to decline a kiss from a date who has just eaten peanuts or other offending foods.

It's hard to know what to make of these disparities, Bassett said. They could reflect differences in access to health care -- those with higher incomes may have more means to seek diagnostic tests, for instance -- but more research is needed to confirm these associations.

The study found that food allergies were more severe among boys than girls, among children 2 and younger, and among those with multiple food allergies.

The study, which included data about more than 38,000 children, does have limitations. Participating parents supplied their own information about their children, and researchers did not confirm diagnoses of the children with doctors.

The bottom line: If you suspect you or your child has a food allergy, get tested by a certified allergist. If your allergist tells you to avoid certain foods, make sure you read labels on everything you eat, ask about all ingredients at restaurants and carry an epinephrine auto-injector. Work with your doctor to develop a food allergy action plan.

Hom has resolved to spread the word about the seriousness of food allergies. He speaks frequently on the topic, and he is promoting a memorial 5K race in San Jose in honor of his son in October.

"I hope one day we will find a cure and that we can find the cause," he said, "so that the future generation will not have to live in fear of going out to eat."