Foodie struggles every day to keep pounds off 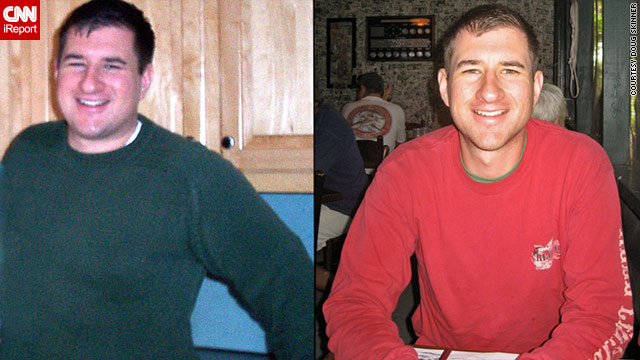 Doug Skinner has lost more than 100 pounds since 2004. Along with his daily running, he eats smaller portions than he used to.
STORY HIGHLIGHTS
RELATED TOPICS

(CNN) -- Doug Skinner held up the pants in the tiny dressing room and shook his head. There's no way, he thought. No way I'm at a size 48.

This was 2004. Skinner was fresh out of college, recently married and just starting his career as a technology coordinator for a local school district. I refuse to go any bigger than 46, he thought vehemently.

"Unfortunately, that day I did have to buy those [pants]," Skinner remembers. "But I didn't go any higher than that."

Skinner always had an excuse for his obesity as a young adult. The self-described "stocky" man was just big-boned, he told himself. In reality, he weighed close to 300 pounds.

"It wasn't like we were stopping on the way home at McDonald's every night -- it was just portion sizes," Skinner says. "The easiest thing in the world [for me] is to eat. I'm a food guy. I love food. I love dessert."

But that day in a badly-lit discount clothing store in New Jersey, something clicked. He walked back over to his wife, Denise, who looked unhappy with her clothing selections as well. They decided right then to make a change. "We said, 'Look, this is it. Let's not kid around anymore."

Got your own weight loss story to share? Visit iReport

The couple went home and borrowed a few Weight Watchers books from a relative and began to eat less.

"The first month, I was starving," Skinner says. "After the first month it was easier. It's still not easy today, but it's easier."

Doug and Denise also started walking laps around a park near their house. It wasn't exactly fun, but he didn't know what else to do to get active. After a few weeks he jogged one lap. Then two. As he lost weight it got easier to jog and a couple of laps turned into a couple of miles. He didn't slow down until he reached 200 pounds.

Now Skinner runs five days a week -- on Mondays it's a long run of six to eight miles; the rest of the days he does about four. On May 1 he completed the 10-mile Broadstreet Run in Philadelphia in a time of 1 hour and 22 minutes.

He doesn't count calories but eats small meals for breakfast and lunch: cereal and a banana in the morning; yogurt and an orange around noon. Dinner he plans ahead of time -- splurging on Friday night when he takes time off from running to share pizza and cookies with his wife.

He weighed in last week at 174 pounds.

Like in any weight loss attempt, there were setbacks. In 2007 Skinner had reached 220 pounds. A "Biggest Loser"-type contest at school helped him drop down to 170. When he posted his story on iReport in March, he weighed 193.5 pounds.

"I'm not ashamed to say my weight goes up and down... It's a constant fight," Skinner said in a phone interview last month. "I'm looking at a bowl of cookies that are right across from me and I kind of want one. Fortunately, the phone cord doesn't reach that far."

"There's no way I'm going to sit at a Thanksgiving table and not eat anything ... I consider myself a foodie and for as long as I live I will never have that type of [fear] relationship with food -- I enjoy it too much. I will not deprive myself because of a pound or two."

He hopes his daughter Gwen grows up to appreciate food like he does, without ever having to worry about battling the scale. So he's setting a good example early.

"I'm trying to avoid putting all the pressure on the food aspect. Every step counts. I say that tongue-in-cheek, but it's important. The thing that's worked best for me is getting off my butt."

Skinner continues to write about his weight loss journey on his blog, Daddy's Tired.