The growing culprit behind liver disease 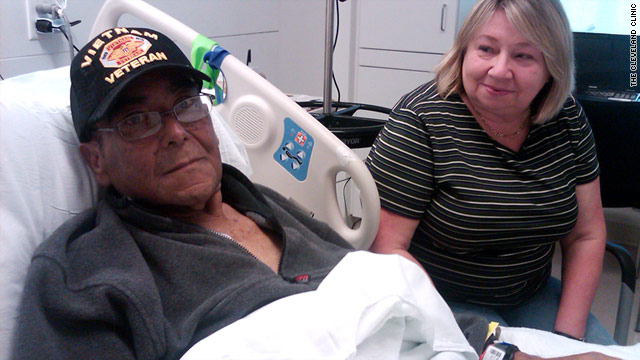 Wilson Alvarado rests at the Cleveland Clinic with his wife, Patricia, by his side. He recently had a liver transplant.
STORY HIGHLIGHTS

(CNN) -- The first time Wilson Alvarado got lost on the way to a neighborhood park, he told his wife, Patricia, not to worry about it -- he was 62, he told her, and just getting a little forgetful.

Patricia thought it was strange, considering the park was only a half-mile away, and he'd driven there every week for more than 30 years. Then Wilson got lost again on the way to the park. A few months later, he called Patricia from the supermarket, asking why he was there.

"I thought, well, maybe he really is just getting old," Patricia recalls. "My mother has Alzheimer's, and I thought maybe that was it."

It was easy to overlook the little memory lapses until several years later when the situation reached a head. While her husband was visiting relatives in Puerto Rico, Patricia received a phone call from his cousin saying they'd taken Wilson to the hospital because he "wasn't making any sense" and was acting so aggressive the hospital put him in restraints.

"It was really horrifying," she says.

Patricia had him put back on a plane to Buffalo, near their home in Cheektowaga, New York. His doctors explained that liver disease was behind Wilson's memory lapses and erratic behavior.

Wilson had cirrhosis, just like alcoholics get, but in his case, fat, not alcohol, was the culprit. At 5 feet 8 inches and 185 pounds, Wilson is overweight, and too much fat in his liver eventually caused it to malfunction.

According to the Centers for Disease Control and Prevention, two-thirds of Americans are either overweight or obese, and doctors say they're seeing more and more patients like Wilson Alvarado.

"It's overwhelming how many patients we're seeing with this problem," says Dr. Naim Alkhouri, a hepatologist at the Cleveland Clinic.

Dr. William Carey, also a hepatologist at the Cleveland Clinic, adds, "This is huge. We didn't even know this disease existed 30 years ago. Now it's the most common liver disease in America."

'We won't have the ability to treat all these patients'

About a third of the U.S. population has nonalcoholic fatty liver disease, according to Dr. Michael Curry, a hepatologist at the Beth Israel Deaconess Medical Center in Boston.

Curry said most of those people -- about 80% -- will not develop significant liver disease. The other 20% will develop a disease called nonalcoholic steatohepatitis, or NASH. Of those, about 20-30% will go on to develop cirrhosis and end-stage liver disease, where the only real treatment is a liver transplant.

"That's about 6 million people. We won't have the ability to treat all those patients," Curry says. "If we even have a fraction of that number of patients, it will overwhelm liver transplant programs."

Laundry in the refrigerator

NASH is often silent, according to the National Institutes of Health. While some people have pain in the right side of their abdomen, most do not. Liver enzyme tests are sometimes normal, and even ultrasounds and CT scans don't always pick up on the disease.

"Symptoms are few and far between," the Cleveland Clinic's Carey says.

"It can sneak up on you," says Dr. Kevin Mullen, a hepatologist at the Case Western Reserve University School of Medicine. "Even your doctor might miss it."

Often symptoms don't show up until the disease has progressed. Sometimes, the first sign is a swollen stomach or ankles, or vomiting blood.

Some patients, such as Wilson Alvarado, develop brain changes called hepatic encephalopathy. As the disease progresses, the liver has a hard time filtering out toxins, which can go to the brain and cause problems such as memory lapses, trouble sleeping at night and lack of coordination.

"It might start out with minimal changes, like a few more dents in the car," Curry says.

"I had a patient who put his laundry in the refrigerator," Carey says. "Another one couldn't remember the family party that had just happened that very day."

Curry adds, "One of my patients got into the shower and turned on boiling hot water and couldn't figure out how to switch it off."

Mullen says, "It really can be bizarre. They might try to sell their house for $100 or walking around the neighborhood unclothed."

If a patient loses weight, eats better and exercises, he or she can often reverse the disease in its earlier stages.

"That's why we like to find these people early," says Alkhouri of the Cleveland Clinic.

However, by the time the disease has advanced to the point of cirrhosis, it's usually irreversible, he adds.

Alvarado had to have a liver transplant last month at the Cleveland Clinic, and his wife says his thinking has become more clear.