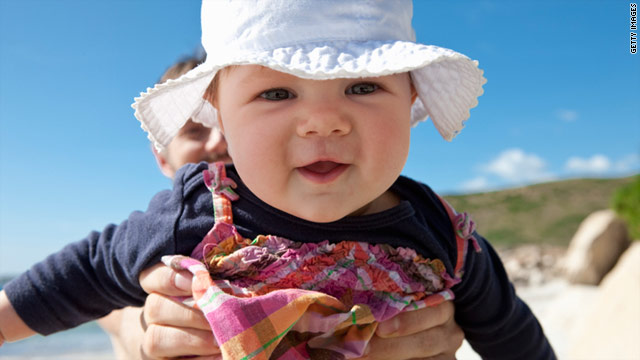 (Health.com) -- Getting too much sun is bad for anyone, but it's especially dangerous for babies, whose sensitive skin hasn't developed enough layers of natural protection to withstand intense summer rays.

In fact, sun-related skin changes that occur as early as the first year of life may trigger a cascade of reactions that could lead to melanoma and other forms of skin cancer later in life, according to a new review in the July issue of Pediatrics.

The skin acts as a physical barrier to ultraviolet (UV) rays, but it also plays a role in keeping the immune system healthy.

UV radiation can suppress the immune system and damage skin cells -- a process that may happen more quickly in babies than in adults, the authors note.

(Two of the authors are employees of Johnson & Johnson, which makes baby sunscreen and other products, and the others have received speaking fees or research funding from the company.)

Few studies have looked specifically at baby skin and sun exposure. However, researchers do know that young skin has lower levels of the skin-protecting pigment melanin and a thinner outer layer, which allows UV rays to more easily reach the melanin-producing cells known as melanocytes.

Damage to those cells is a "precursor to melanoma," says Robin Gehris, M.D., the chief of pediatric dermatologic surgery at the Children's Hospital of Pittsburgh.

"Infant skin [may be] even more prone to sun damage than we had thought, and that might be important later on for melanoma and other cancer risk," says Gehris, who was not involved in the new review.

Sun exposure earlier in life -- from infancy through adolescence -- seems to be associated with different cell changes and an earlier diagnosis of melanoma than exposure in the adult years, the article points out.

Skin cancer rates -- including rates of melanoma, the most lethal type -- appear to be rising.

One study cited in the review has projected that 1 in 33 babies born today will develop melanoma during their lives, versus 1 in 1,500 babies born in 1935. The American Academy of Pediatrics, which publishes Pediatrics, advises parents to keep children 6 months or younger out of the sun completely.

For older babies, the organization recommends dressing infants in brimmed hats and sun-protective clothing, applying sunscreen to any small patches of exposed skin, and minimizing sun exposure during the midday hours, when the sun is at its hottest.

Health.com: How to stay safe in the sun

Infants need to be protected even from incidental sun exposure, Tamburro says.

"It's not only about 'I'm going to the beach now or [getting] in the sun,'" she says. "It's even a car ride or walking to the store. It's the recreational exposure also."

When choosing a sunscreen, look for a sun protection factor (SPF) of 15 or higher and apply 15 to 30 minutes before going outside, Gehris says.

Opaque sunscreens that don't disappear into the skin have the advantage of being visible, so parents know their child is covered.

"There's no option of going out without some protection," Gehris says.