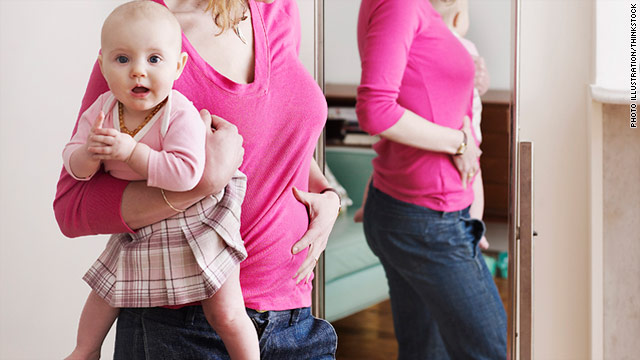 Less than 10% of the women in the study lost weight between pregnancies.
STORY HIGHLIGHTS
RELATED TOPICS

(Health.com) -- Women who gain weight after giving birth for the first time dramatically increase their risk of developing pregnancy-related diabetes during their second pregnancy, a new study suggests.

Compared with women of similar height who maintain their weight, a 5-foot-4 woman who gains roughly 12 to 17 pounds after giving birth more than doubles her odds of developing diabetes during her second pregnancy, the study found. If she gains 18 pounds or more, she more than triples her odds.

(The study used body mass index, a ratio of height to weight, so problematic weight gain will vary according to a woman's height.)

Diabetes diagnosed during pregnancy, known as gestational diabetes, is influenced by hormonal changes and normal weight gain and usually goes away after the baby is born.

It can lead to birth complications, however, and it also increases a woman's risk of developing type 2 diabetes later in life. In addition, it makes the baby more prone to diabetes and obesity as he grows up.

The findings underscore how important it is for women to lose their baby weight and keep postpartum weight gain to a minimum, the researchers say. This applies especially to those who are overweight or obese at the start of their first pregnancy.

The overweight women in the study who lost weight post-birth substantially lowered their risk of gestational diabetes compared with those who maintained their weight.

"We acknowledge that this is not an easy thing to do," says the lead author of the study, Samantha F. Ehrlich, a researcher at Kaiser Permanente, in Oakland, California. "It's quite common for women to gain weight."

The study, which appears in the June issue of the journal Obstetrics & Gynecology, included 22,351 ethnically diverse women who were members of the Kaiser Permanente health plan in Northern California. The overall rate of gestational diabetes during the women's first pregnancy was 4.6%, and during the second it was 5.2%.

Health.com: Have diabetes? Tips for a healthy pregnancy

Less than 10% of the women in the study lost weight between pregnancies, which isn't surprising given the new stresses and responsibilities that come with a newborn.

Having a baby causes a host of changes to a mother's life and lifestyle that can influence her eating patterns, exercise habits, and work-family balance, says Truls Ostbye, M.D., a professor at Duke University Medical Center, in Durham, North Carolina, who studies postpartum obesity but was not involved in the current research.

"Many of these changes make it hard to return to a healthy weight," he says. "But the period can also be seen as a teachable moment for positive change. [It] can be time when the mother -- and the rest of the family -- can refocus on a healthy lifestyle and set the new baby on a lifelong healthy trajectory."

Pregnant women should walk regularly (with or without a stroller), keep snacking to a minimum, and avoid soda and other sugary drinks, Ostbye says. Breast-feeding can also make it easier for women to shed pregnancy pounds.

Women who breast-feed their babies for at least six months are more likely to achieve a healthy weight after pregnancy, Ostbye adds. Ehrlich and her colleagues are currently studying a weight-loss program, which includes weekly telephone coaching sessions, specifically tailored to help women with infants exercise and eat well.

"We believe that something that's based on the telephone or a website would be easier for new moms to do than having to go somewhere to have classes," she says.