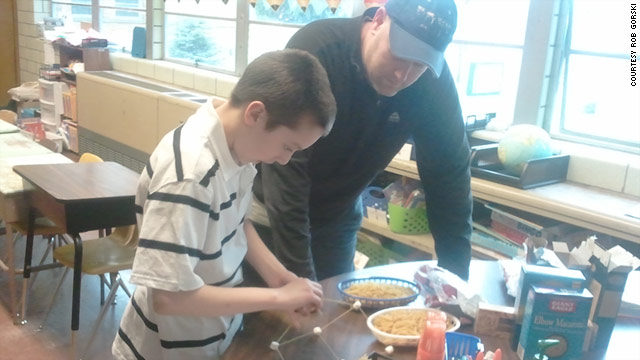 (CNN) -- Gavin Gorski, 11, opens his hands as his father dispenses the pills.

An orange tablet, a green pill, white oval shapes and oblong ones -- nine drugs total -- fall into his palm. The fifth-grader scoops them into his mouth. Later in the day, he takes eight more pills.

The clozapine helps him with the hallucinations and voices he hears. The lithium stabilizes Gavin's mood. Without them, he stays up for nights and has no impulse control.

"We couldn't exist without him being medicated," said Rob Gorski, Gavin's father. "We struggled with it at first. Nobody wants to medicate their kids, but it comes to a quality of life issue. When he is un-medicated, his quality of life is really low."

The majority of cases are not as severe as Gavin's. The most common reasons for use of antipsychotics by children are intellectual disability, attention deficit/hyperactivity disorder and disruptive behavior disorder.

But children's conditions could be misdiagnosed and drugs prescribed for minor symptoms, experts say. Putting kids on multiple drugs could put them at risk for drug interactions and side effects, they say.

There also is potential for abuse, with parents intentionally medicating their children to make their behavior more manageable.

"If the child is horrendously disruptive -- self-injury and hurting themselves -- yes, use medication in young children," said Dr. Mani Pavuluri, director of the Pediatric Brain Research and Intervention Center at the University of Illinois at Chicago. "But it's always cautious to wait until they're a bit older than 5."

Pharmaceuticals should be the last resort after therapies and behavioral interventions, Pavuluri said.

Six years ago, Gorski and his wife mulled whether to put their eldest son on several prescription drugs. The Gorskis felt uneasy about putting their then-young son on so many drugs.

Gavin has Asperger's syndrome and schizoaffective disorder, which is similar to schizophrenia.

Without taking 17 pills each day, Gavin boasts that he can jump out the window and fly. He can't differentiate between reality and hallucinations. He loses all fear and runs in front of cars. Sometimes, he becomes violent to his family members.

The drugs help him so much, his father said.

"There is stigma attached to it," Gorski said about putting his son on several drugs. "People think you can manage it with diet and that you're making your child worse, that they're poisoned. If you take meds for the right reasons, it serves a purpose. It gives them a better life."

Other parents have expressed shock at the number of pills Gavin needs to consume.

Medication for mental illnesses is the cornerstone of treatment, especially when patients are aggressive and manic, said Pavuluri, an American Academy of Child and Adolescent Psychiatry spokeswoman.

She recalled a dramatic case of a 6-year-old patient who was using Google to search the word suicide and trying to eat the carbon off a pencil to harm herself.

In such cases, medication may be necessary, but doctors should try to rely less on pills for milder psychological disorders and examine the child's life as a whole, Pavuluri said.

"It's very important to see that behavior is related to how kids are being parented," Pavuluri said.

One diagnosis that is rapidly growing is attention deficit hyperactivity disorder. Nearly one in 10 U.S. children has a diagnosis of ADHD, according to a 2010 report from the Centers for Disease Control and Prevention.

Not all ADHD cases require medication, medical experts said. There are nonpharmaceutical routes such as making sure the child's home life is more organized. Parents can limit screen time and teach planning skills to overcome some distractions, several medical experts said.

There could be bigger issues affecting children's behavior and attention, like a death in the family, an abusive relationship and other life experiences, experts said.

The problem could be a result of poor parenting, said Dr. Elizabeth Roberts, a child and adolescent psychiatrist.

"We are medicating children sometimes for ferociously awful behavior based on poor parenting," she said.

The behavior is construed as ADHD, and more severe cases are diagnosed as bipolar disorder, she said.

While stressing there are legitimate cases that call for medicating children, Roberts, who practices in Murrietta, California, warned against throwing pills at a problem.

Sometimes, parents fake a condition for the child in hopes of getting drugs for themselves, she said.

Some parents request prescription drugs because their kids misbehave in school, get low grades or got a lower SAT score than they had hoped for, Roberts said.

ADHD drugs such as Adderall and Ritalin have become popular on college campuses for students who don't have the condition but want to boost their academic performance through better focusing.

A 2010 CDC survey found that one in five U.S. high school students said they had taken a prescription drug such as OxyContin, Percocet, Vicodin, Adderall, Ritalin or Xanax without a physician's prescription.

"Who holds the key to the medicine?" Roberts said, about who controls access to the prescription drugs. "Not the drug companies, the parents, the teachers -- the doctors. They should stop this in the tracks."