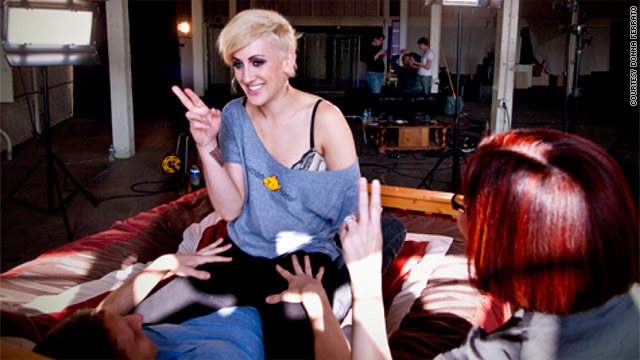 Ryan and Wylde rehearse a scene in a studio with their director.
STORY HIGHLIGHTS
RELATED TOPICS

(CNN) -- Dylan Ryan and Danny Wylde knew each other online -- she's read his blog, he's seen her tweets -- before they met in person in Los Angeles a few weeks ago. A bit awkward, they made small talk, spending an hour or so getting to know each other.

"When I'm with someone new, my primary bit of nervousness is I have no idea if they'll like me, or be attracted to me, or be interested in me," Ryan says. "It's sort of akin to a first date situation."

But this wasn't a first date -- it was strictly business. After chatting, Ryan and Wylde got to work, which in their case meant having sex. Ryan and Wylde (their stage names) are adult performers.

While hooking up with a new co-star can provoke some anxiety, there's one thing they're usually not anxious about: getting a sexually transmitted disease from their co-star, since both get tested for STDs at least once a month.

"Before you start shooting, you go online to see the other person's test results," Wylde explains. "Or sometimes on set, before you start, they show you the results on paper."

"It really shows they're thinking conscientiously," Strafford says. "I think it really works."

Talent Testing Service, which does STD screenings for adult performers, routinely tests for HIV, chlamydia, and gonorrhea, according to Sixto Pacheco, president and CEO of the service. In addition, some performers opt for an additional panel of tests for hepatitis B, hepatitis C and syphilis.

So far, Ryan and Wylde say it's worked for them. Ryan says in her eight years as an adult performer -- she has about five sexual partners a month professionally -- she hasn't contracted a single STD. She says when she has sex with men outside work she always uses a condom. Wylde says about once a year he comes down with a case of chlamydia or gonorrhea.

"I take some pills and it goes away in a week," he says, adding that outside of work he has sex only with other performers, since he's knows they're regularly tested.

While the testing isn't foolproof, it lowers the risk of getting infected. Combine that with condom use and the risk goes down even more.

HIV is a particularly tricky test, since it may provide a false negative if taken too soon after a person is exposed to HIV. This is because most people don't produce enough antibodies for the test to detect until around a month after being exposed. Some people take three months or longer to produce detectable antibodies.

"I think about this all the time," says Ryan, who's been an adult performer for eight years. "It's by far the biggest risk in the industry. I think the one thing that gives me comfort -- small comfort -- is that the people I'm working with by and large have very strong safer sex practices because of what they do for a living."

Wylde says he's not too concerned about contracting HIV since he has sex only with women, but he adds that he knows he's taking at least a small risk.

"There's risk in a lot of jobs," he says. "Professional athletes take risks."

When beginning a new relationship, many wonder what diseases they should get tested for.

"It's a very common question, for both males and females," Strafford says.

Neither the Centers for Disease Control and Prevention, nor the American Social Health Association has a list of STDs you should get tested for when you're about to have sex for the first time with someone. However, after discussion with various STD experts, here's a list of tests many doctors recommend.

They can be a starting point for a discussion with your doctor. The CDC has a list of clinics that offer testing for STDs by ZIP code.

Often a simple urine test is all that is necessary; sometimes a swab must be taken from the infected area, according to ASHA.

Many people don't know they have chlamydia, the most frequently reported bacterial sexually transmitted disease in the United States. Complications among men are rare, but in women chlamydia can lead to chronic pelvic pain, infertility, and ectopic pregnancies. The disease can be easily treated and cured with antibiotics, according to the CDC.

This is also often a urine test, although sometimes a swab is taken from the infected area, ASHA says. Some men have no symptoms of gonorrhea, while others have painful urination or discharge from the penis, according to the CDC. Antibiotics can treat the disease, but if left untreated, gonorrhea can lead to infertility in men and women, and can be life-threatening if it spreads to the blood or joints.

A blood test is used to diagnose syphilis, a disease that's easy to treat in its early stages, but if left untreated can cause blindness or even death, according to the CDC.

Hepatitis A and B

Men who have sex with men should talk to their doctor about getting tested for Hepatitis A and B, and they should also be vaccinated against the diseases, says Dr. Hunter Handsfield, a clinical professor of medicine at the University of Washington Center for AIDS and STD.

As noted above, you can be positive for HIV for several weeks or months before it will show up on most HIV blood tests.

A note about herpes

About one out of six people ages 14 through 49 have genital herpes simplex virus type 2, according to the CDC. Testing is controversial since the results are not always accurate or helpful.

Dr. Bradley Stoner, associate professor of anthropology and medicine at Washington University in St. Louis, Missouri, and a spokesperson for ASHA, says the best strategy might be to get tested if you have recurrent lesions that could be herpes, or if you're starting a new relationship with someone who has herpes, since drugs can be given to your infected partner to decrease the chances you'll get the disease, too.

"Other than that, I probably would not screen for herpes -- the waters are just too murky," Stoner says.