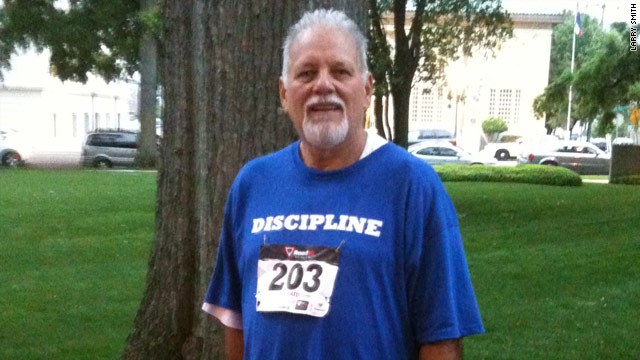 (CNN) -- Larry Smith's desire to make sure he's alive to watch his grandchildren grow up was his light bulb moment.

"I was on the path to not living old and this bothered me," he said. "I want to live long enough to see my young grandkids reach big milestones like graduate from school and get married, or even enjoy simple activities like playing in the yard with them. My grandkids mean the world to me."

"When they announced I was the winner of the challenge, it was a very emotional experience for me," Smith said.

"I've never won any kind of athletic event, and it felt like a huge achievement to do it," he said.

Smith, who is 5-foot-10, started the boot camp at 261 pounds and with much hesitation. 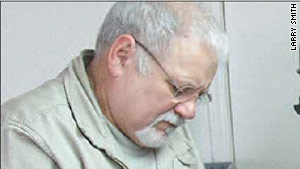 Larry Smith before his weight loss

"During the first day of the program I thought I wouldn't be able to keep up with it because it felt very intimidating and I worried about my weak knees," he said.

Smith has struggled with his weight most of his adult life. Before the fitness program, he led a very sedentary lifestyle. He often felt sluggish, lacked energy and felt "miserable." He always dreamed of losing weight, but kept putting it off.

"By nature, I think many people are procrastinators, and losing weight was something I always wanted to do but was on my procrastination list," he said.

The grandfather of three said an e-mail in his work inbox announcing the "Fit 4 Change Mississippi Fitness Challenge" was the final push he needed to jumpstart his journey toward a healthier lifestyle.

"I had known people who participated in the challenge last year and were successful at it, so I thought I'd give it a try," he said. "I thought it would be worth it for both me and my grandkids." 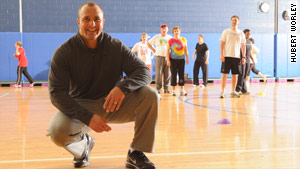 The program was led by Mississippian Paul Lacoste, a former pro football player turned fitness coach, with a vision to help slim down the Magnolia State, which has an adult obesity rate of 33% - the highest in the United States.

Participants shed a collective 3,043 pounds and 714 inches from their waists by the end of this year's challenge.

"The fitness event was one of the hardest things I have ever done in my life," Smith said.

"Paul worked us really hard during our early morning workout sessions and pushed us to our limits," he said.

Weight lifting and various cardiovascular exercises were a major part of the fitness plan. Smith and other participants met four days a week for intense one-hour workouts.

Before the challenge started, Smith had high blood pressure, high sugar glucose levels and did not eat well-balanced meals.

After he started the fitness challenge, he added healthy food to his diet, such as fruits, vegetables, fish and chicken, and he eliminated fatty foods and red meats.

"One of my favorite things to add to food is mayonnaise, but I substituted it with Greek yogurt during the program and this helped me reduce calories," he said.

"I'm still eating the yogurt, and enjoy it."

It took a lot of effort for me to change my lifestyle, but once I started seeing the pounds shed away, it gave me the motivation I needed to keep going.
--Larry Smith

Smith said the first few weeks of the program were the most challenging, but after a while he adjusted to his new routine and diet and appreciated the opportunity to get fit.

"It took a lot of effort for me to change my lifestyle, but once I started seeing the pounds shed away, it gave me the motivation I needed to keep going," Smith said.

Smith said his goal was simply to get in shape, and he never aspired to win the fitness challenge. He was pleasantly surprised when he did. His blood pressure and sugar glucose levels are normal now, and he feels much better since dropping his weight.

Since the program has ended, he continues to work out and has dropped eight more pounds.

"I just joined the 'Y,' signed up for kick boxing, step and Pilates classes and continue to both walk and run every day," he said.

"Paul's program was the jumpstart I needed, and now I am continuing my weight loss journey on my own," he said.

Smith said everyone needs to find their own way to a healthy lifestyle and says his best advice is to "just do it," find something you like and don't procrastinate or "wait for tomorrow" like he once did.

"I look forward to spending many healthy years into the future with my grandkids, and am glad I am taking the necessary steps to do it," he said.