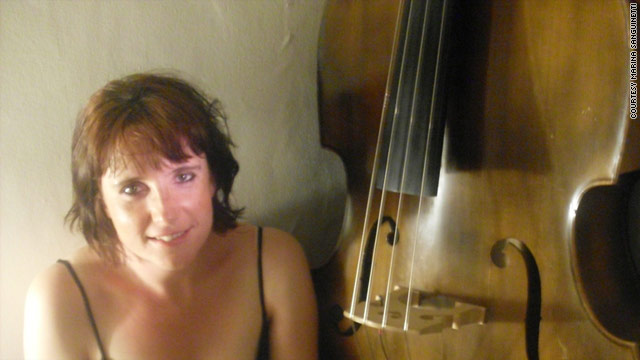 (CNN) -- "I'm edging towards being a recluse, but choose daily to fight for release from this crippling prison."

This is how Gemma Boyd describes her life with obsessive compulsive disorder, a mental illness marked by unwanted thoughts and repeated behaviors or rituals intended to reduce anxiety. She wrote these words in a poem last November, the first time she tried to deal with her daily struggles through creative writing.

Boyd, a 35-year-old British musician and poet, shared her poem online with Machine Man, an online forum where anyone with something to say about OCD can submit art, creative writing and multimedia projects, in addition to joining conversations about the condition. The forum is the online counterpart to a movie project called "Machine Man," both of which aim to spread greater awareness of OCD.

The film will aim to "get it out there what OCD really is, and take away some of the shame and stigma," said Kellie Madison, writer and director of "Machine Man."

It will portray a young man's struggle with OCD, showing how intense anxiety and compulsions quickly take over his life and prevent him from pursuing a relationship with the woman he loves. The script is complete, and production is still in the fundraising stages.

In the online forum, Boyd and others with OCD have found a safe space to express a part of themselves previously shrouded in silence. And they're energized by the prospect of a movie that would both represent their struggles and educate a wide audience about the disorder.

"I'm hoping that I'll be able to have a platform with this movie, and to try to really change my life around, because I have no choice but to do that," said Stephanie, a poetry contributor to the "Machine Man" forum who suffers from OCD, who asked that her last name not be used.

About 2% of adults in the United States have OCD, according to the National Institutes of Health. Across the ocean, where Boyd lives, about 1% of the United Kingdom's population is thought to have it, although this estimate is probably low, says the organization OCD-UK.

The illness often has an element of predisposition, meaning some people are more likely to develop it than others, said John Tsilimparis, an OCD therapist in Los Angeles. In fact, there is some evidence that people with OCD have distinct brain activity patterns. Stressful situations and traumatic events can trigger symptoms.

"I'm the architect still, I forgot how to draw. My healthy balance and perspective is a bit flawed. I'm OCD, tried for perfection for too many reasons," writes Stephanie in a recent poem called "My Frame".

For Boyd, 35, it was a traumatic event (which she'd prefer to keep private) that got her obsessively worrying about contamination about five years ago. But prior that, she had a mountain of bad memories from being sexually abused as a child that she'd repressed, and which also fueled her anxiety.

The intrusive thoughts started with a fear of blood. Over time they expanded; she became afraid of being attacked by men, any men, and could vividly imagine assaults even from male friends. In some of the worst periods, she couldn't leave her house because she kept checking and checking appliances, fearing a fire or home invasion.

"Relentlessly checking and re-checking numbers, magazine pages, text messages, household appliances -- everything -- causes my nerves to jangle 24-7: a gradual wearing down of brain function and twisting and twirling children who repeat and repeat aggravate my stifled anger," Boyd wrote in her poem.

To this day, she avoids many situations she used to enjoy so that she can avoid social contact: swimming pools, movie theaters, and restaurants.

"It's a battle against things which lots of people take for granted. I don't let it completely ruin my life, but it has made my life an uphill struggle," she said.

Crowds are out of the question -- unless, curiously enough, the people are listening to her play music. A professional musician, Boyd has found that the anxiety that restricts her in daily life isn't as bad when she's behind the double bass (her website lists six gigs lined up in May already). Music has been a sort of medicine, she says.

"When I'm performing, because I've got an instrument in front of me, I feel I'm protected a bit," she said. "When I'm in a normal situation, I feel as if I haven't got a skin."

As freely as OCD may be mentioned these days in popular culture -- a recent episode of "Glee" focused on it, for example -- Boyd had a tough time getting help near her hometown of Brighton and Hove, England.

She underwent several psychological assessments before receiving the diagnoses of OCD and post-traumatic stress disorder. Then she waited. And waited. It took about three years before she got to see a therapist who was supposed to be the best person in the area for OCD relating to sexual abuse. As it turns out, the therapist admitted that she didn't know much about OCD at all. Boyd stuck with her anyway for two years, but it only partially helped.

"I'm scared of opening up and then being told that there's no help available," she said. "Instead of seeking that help, I'll read the literature (about OCD), which isn't ideal."

Boyd has gotten some of her most critical OCD education through watching television and reading. The A&E program "Obsessed" taught her the difference between "obsession" and "compulsion," as well as the biological underpinnings of the disorder and various kinds of therapies.

A behavioral treatment shown to help people with OCD is called exposure therapy. Basically, the patient is forced to confront her fears -- for example, going out in public if she wouldn't normally, or letting time pass without checking to see if appliances were left on. The therapist systematically helps the person desensitize herself, Tsilimparis said. Psychiatrists may also prescribe drugs called selective serotonin reuptake inhibitors, which help depression as well.

She does not take medication, and has decided against it for the time being. She has tried exposure therapy techniques on her own, but it's exhausting without support.

"You do need somebody to physically be there while you're experiencing these feelings, which I think can be pretty terrifying," she said.

On the bright side, Boyd has received positive feedback on her poem in the "Machine Man" forum, and some people have asked her to write more about it. She says she probably will.

"It's kind of helped me feel not so alone with my OCD," she said. "Hopefully, I've helped other people see they're not alone."