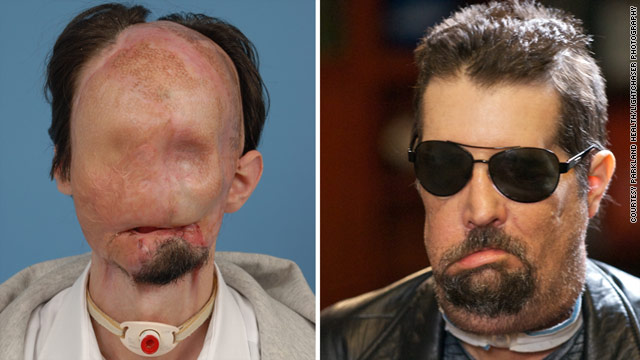 Dallas Wiens, 26, lost much of his face after an accident. He received a new face in a landmark transplant operation.
STORY HIGHLIGHTS

(CNN) -- Dallas Wiens wanted to feel his 4-year-old daughter's kisses again, something he couldn't do after a horrific electrical accident disfigured his face.

But he'll be able to sense her touch again soon, doctors said Monday, less than two months after Wiens underwent the first full face transplant in the U.S.

In the meantime, Wiens already has little Scarlette's seal of approval. "She actually said, 'Daddy, you're so handsome,' " he said at a news conference Monday. "To her, I'm still Daddy. That in itself is an amazing thing."

Wiens' experience represents a new frontier for reconstructive surgery, said Dr. Jeffrey Janis of Parkland Hospital and University of Texas Southwestern Medical Center in Dallas, who has treated Wiens from the time of his accident.

His injury happened in November 2008 when Wiens, now 26, was painting his church as a volunteer: His head got too close to a high-voltage power line, and he lost almost his entire face from the burns.

For 90 days, doctors kept him in a medically induced coma while they performed surgeries and he breathed through a ventilator. Many people didn't think he'd make it out of the intensive care unit, Janis said Monday.

But he did survive. Janis connected with Dr. Bohdan Pomahac, Burn Unit director at Brigham and Women's Hospital in Massachusetts, who had previously performed a partial face transplant. Pomahac became the team leader for more than 30 medical professionals who would take part in Wiens' surgery.

Even though the procedure was relatively pioneering -- few such transplants have been done throughout in the world -- Wiens didn't hesitate to agree to it, Janis said.

"I think he had his eyes on the goal, which was to feel his daughter's kisses again on his face, and nothing was going to stop him from doing that," Janis said.

In a 15-hour procedure in mid-March, doctors gave Wiens a donor forehead, nasal structure, nose, lips and facial skin. They also transplanted underlying muscles and nerves that will allow Wiens to have sensation and movement in his face.

"When I woke up, and I was able to feel I had features again -- eyes and a nose and a mouth -- I even said out loud that this could not be medically possible," Wiens said Monday. "But here I am today."

Wiens said his face "feels natural, as if it has become my own."

The face, spanning from the mid-scalp down to the neck, does not look like Wiens' own face or that of its original owner. That's because the appearance of a face is made of many components: skin, fat, muscle and bone. The skeleton of Wiens' head is his own and creates a unique face in combination with the donor's features.

But there is one thing that remains Wiens' signature from before the accident: his goatee. Even in the intensive care unit, he wanted to keep a goatee. It turns out that the donor's face, now part of Wiens' own, can grow hair. Even the hair on Wiens' head, from the mid-scalp area, is part of the donor skin (the hair on the back of Wiens' head is his own).

"The face that he received has the full ability to grow facial hair like any male," Janis said.

Currently, he can feel pressure on his face, Janis said. In the next six to nine months, Wiens will start to be able to feel light touch on his face and to move his face and lips, Pomahac said. His speech is currently a bit garbled, but doctors expect it to improve as more nerves begin to function.

The first thing Wiens could smell was lasagna at the hospital, which smelled "delicious," he said. And he remembers smelling hibiscus and other flowers brought into his room.

"To know I could smell a rose or anything like that again, really hit home for me," he said.

His hardest adjustment has been the loss of eyesight, "not because I'm blind but because I had to adapt my entire life around that," Wiens. He still has his right eyeball but no light perception, Pomahac said. There are shields where his eyes used to be, which can later be made to look more natural, Janis said.

Pomahac used to say there's no chance of restoring Wiens' sight, because of lack of technology, but now he says there could be hope for that to change in the future, he said at the news conference.

Over the past decade, there have been many advances in the area of face transplantation.

In April 2010, a patient identified only as "Oscar" received the first ever full-face transplant in Spain. That operation took 24 hours.

Connie Culp of Ohio also represented a face transplant milestone, receiving a transplant of more than 80% of her face at the Cleveland Clinic in December 2008. More than two years later, she said she was happy with the transformation and could smell and eat most solid foods again. She had lost these abilities sensations after husband shot her in 2004, shattering her nose, cheeks and upper lip.

The first partial face transplant took place in November 2005 in France. The patient, Isabelle Dinoire, had been mauled by a dog. She received a new chin, lips, nose and other facial parts from an organ donor.

Pomahac said he expects a growth in these kinds of cases. There's one other patient in line for a face transplant through the same Department of Defense grant that funded Wiens' procedure, Janis said. In the future, when the technique is refined, people with specific injuries could receive transplants of individual facial features, Janis said.

Wiens plans to go back to Texas and "spend time with my family and continue on with my life," he said. He also wants to continue his education.

With the drugs currently available, Wiens will have to take medication for the rest of his life to suppress his immune system so that his body will be less likely to reject the new tissues.

Janis and colleagues expect Wiens to get home soon and will be continuing to follow his progress.

And the first thing Wiens will do when he gets home? "Hold my daughter," he said.