Why kids need recess and exercise 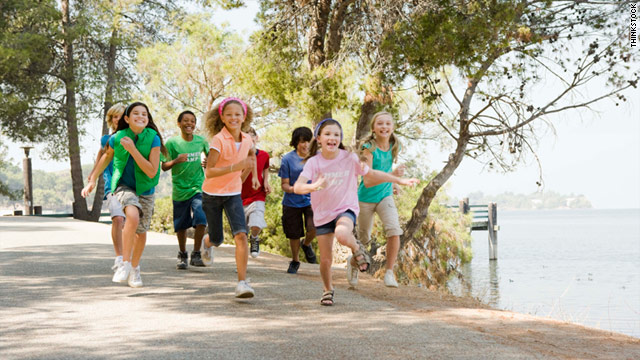 (Parenting.com) -- More and more researchers, educators, and parents are realizing that not only is playground time good for kids-it is crucial. Here's why it just may be the fourth "R" in school, and what you can do to make sure your child gets a healthy dose of downtime.

Let me put this out there: I totally get it. Teachers are under pressure to make sure they've drilled reading, 'riting, and 'rithmetic deep into their students' brains -- and there are only so many hours in the school day.

So if you have to get rid of an "extra" activity to make way for more book time -- well, you might as well go for the playtime. After all, school is supposed to be about learning, right? And what mom doesn't want her kid to ace The Test?

Still, I could see the toll it was taking on my daughter Mari, when, two weeks before fourth-grade testing, she dragged herself off the bus and into our kitchen -- exhausted, tense, and frazzled.

Turns out the only break she'd had during her six-and-a-half-hour school day was for a 22-minute lunch (quiet talking only). Recess had been "suspended" for two weeks so the teachers could get in extra test prep--and by this point Mari hadn't seen the monkey bars, bounced across a hopscotch board, or breathed fresh air for days.

And I was fuming.

I mean, prisoners get more time out on the yard than the fourth-graders at my kid's school -- and I thought it terribly unfair that my 9-year-old was being denied something as basic as a respite from her classroom.

This recess hiatus was a problem. The anecdotal proof was sitting -- melting down -- before my eyes. And, as it turns out, there is plenty of hard evidence, too.

A recent multicenter study of more than 11,000 eight- and nine-year-olds, led by pediatric researchers at the Albert Einstein College of Medicine, in New York, showed that kids who had at least 15 minutes of recess a day (even just 15 minutes!) behaved better in class.

According to study author and developmental pediatrician Romina Barros, M.D., their conduct was likely better because, after hours of concentration, they were able to give their exhausted brains a rest before going back to absorbing information -- something many young kids can only do well for about a half hour at a time.

Dr. Barros decided to conduct the study after observing a young patient's classroom -- to see how antsy the student and his peers were by lunchtime. They were given no work breaks, save for 15 minutes of quiet snacking at their desks.

"They couldn't stand up or walk around, the heat was on in the classroom, and by noon -- when it was time for them to go eat -- I had a headache," recalls Dr. Barros, who has two daughters of her own, one of whom is now in school.

"It took the kids in that class fifteen minutes just to line up. They were fried." Think about it: As adults, we value -- in fact, we demand -- a little downtime during our workday. "But kids aren't allowed to say 'I need a break,' then get up and leave," Dr. Barros says.

In addition to the mental pause, recess appears to be the most effective way to keep kids active. A study by the Robert Wood Johnson Foundation found that 42% of the nation's schoolchildren get most of their total daily exercise at recess -- more than do so in P.E. or after-school programs.

For sure, in light of America's childhood-obesity problem (17% of kids between 2 and 19 are obese), participating in recess is one of the few inexpensive, readily available opportunities we have to get kids moving.

What's more, children who don't get recess miss out on valuable life lessons, according to Susan Ohanian, an education advocate and author of "What Happened to Recess and Why Are Our Children Struggling in Kindergarten?"

"Anybody who knows anything about children -- particularly little kids -- knows that they learn so much on the playground: how to get along, negotiate, make and follow each other's rules, talk to one another, and fall down and get back up again," says Ohanian, who, in addition to being an instructor at an alternative high school in Troy, New York, has taught third, seventh, and eighth grade in public schools there.

"But for kids these days, lunch is too short, they don't get a chance to talk to anybody, sometimes they can't even get a drink or go to the bathroom -- civilized things adults take for granted. It's barbaric."

It's been quite a while since I've experienced recess, but I have incredible memories of my time on the playground: I loved playing jacks and Miss Mary Mack with my best friend, Stacey; I almost got my butt kicked in a schoolyard brawl with the nerdy girl, Kim; and the slide gave me the perfect cover for staring at and daydreaming about Sean, who I thought was the cutest boy, like, ever.

Most of all, I couldn't wait to feel the sun kiss my face as I soared higher and higher on the swing -- a rare delight for this latchkey kid who couldn't go outside until my mom came home from work. Recess was everything to me.

So, if research has proven that recess is good for kids, why are more and more schools eliminating it? Studies suggest that as many as 40% of schools nationwide have cut recess -- citing lack of time, supervision, and resources.

Students most likely to get little or no time outside, says Dr. Barros, are those in low-income, urban neighborhoods where play areas are scarce -- and teachers are busy trying to raise their students' test scores to meet strict federal No Child Left Behind standards.

Meanwhile, there are some parents who don't object to seeing recess go away. They often have less than fond memories of the playground, and are keen on sparing their children the bullying they endured.

But there is also a large group of moms who couldn't disagree more. When Jennifer van Rosmalen, of Peoria, Arizona, heard that her 9-year-old son -- and the entire fourth grade -- had lost recess privileges for forgetting to bring pencils to music class, she thought it "cruel and unusual punishment."

And she was flabbergasted when her 11-year-old told her that the sixth-, seventh-, and eighth-grade students in his middle school had gone without recess for six months because of an unspecified incident on the playground.

"To me, it's like taking away air or depriving someone of sleep," she says. "These things are essential for health and well-being, and so is recess."

Van Rosmalen says she appealed to the principals of both her children's schools -- even offering to work as a recess monitor at the middle school -- but with no luck. (The first principal, now at another school, doesn't recall the incident Van Rosmalen described; the second denies the mom's account.)

For Marie Walton, a Howell Township, New Jersey, mom of two, the outcome was different. She dug in, fought her children's school district to make recess a priority -- and won.

Walton started her mission after finding out, during a meeting about raising money to install new playground equipment, that the kids in her second-grade son's elementary school rarely, if ever, went outside for free play.

"I was just shocked," says Walton. "I grew up in this town, and I immediately thought of my fifth-grade teacher -- who took us outside, even if it was drizzling or snowing. I was floored that these kids were expected, at such a young age, to sit all day."

Armed with mounds of research -- and some 300 signatures from like-minded parents -- Walton spoke before the local Board of Education, arguing for playtime for all other township's schools.

"So much pressure has been put on our teachers to produce high test scores," she told the board. "Perhaps you would see [the kids] perform better if they were given a chance to release the anxieties and stress of everyday school pressures."

It took many months of advocacy -- and a movement-sparking front-page story in the local newspaper -- for the board to implement guidelines that, while not mandatory, ask schools to fit in at least 20 minutes of recess daily and to limit punishing students by taking away playtime.

The fight wasn't easy, Walton concedes, but was well worth it--if only to help her kids make it through the long day. "They need fresh air," she says. "And it's up to us, as parents, to fight for their right to take a break."

She and some other moms later got a more sweeping bill introduced before the state legislature. (At press time, that bill hadn't made it through the governor's office; a new one has been introduced.)

As for my own frazzled child, things -- happily -- turned around. A new principal, who seems to recognize the importance of playground time, has stepped in at Marl's school.

Marl's enjoying her time outside, where she's found new best friends, gets to work off some steam, and, best of all, is able to just goof off for a while, hanging on the monkey bars, feeling the calluses on her hands and the wind through her locks.

How to get recess back

What you need to know to fight for your child's right to play midday.

1. Get informed. Arm yourself with plenty of research about the importance of play to kids' development.

You'll find great resources at Peaceful Playgrounds, an advocacy group whose Right to Recess Campaign includes downloadable PowerPoint presentations and studies to support the argument. You can also connect with your state's "recess advocate," who can help gather information and resources.

2. Get galvanized. Teresa Evanko Bilello, a Muncie, Indiana, mom of two, rallied a core group of parents to speak at school-board meetings so they could see she wasn't the only mom riled up about the lack of recess at her children's schools.

"Make yourselves a nuisance if necessary," says Bilello, whose efforts successfully brought playground time back to the schools' schedule.

3. Get to the higher-ups. Talking to your child's principal about reinstating or extending recess is a good start. But if you're really looking to change school policy, take your case to the local school board (or higher!), where system-wide reform can be made.

And remember says Walton: "We're the ones who vote these people into their positions. If they don't give your school what it needs, you can replace them with leaders who will."