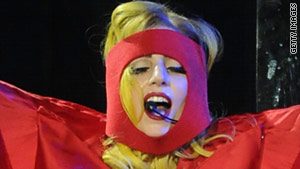 (CNN) -- A long awaited night out at a Lady Gaga concert turned into a nightmare for a 33-year-old Tennessee woman, whose heart was restarted after stopping for five minutes when she went into cardiac arrest.

Crystal Thornton, from Lyles, Tennessee, was enjoying the concert's opening act at the Bridgestone Arena in Nashville with her best friend Christina Tugman on Tuesday night when she had a seizure, according to information provided by Vanderbilt Medical Center.

"She stopped breathing, her eyes rolled back in her head, and her body started twitching," Tugman said. "I was asking if she was OK, and she wasn't responding."

Tugman ran to the lobby to get help. It took Jerry Jones, an EMT supervisor with Vanderbilt University's LifeFlight Event Medicine program, one minute more to reach her.

"The patient was unconscious with no heartbeat," Jones said.

Using a portable automated external defibrillator, Jones and other paramedics spent more than five minutes until they were finally able to get Thornton's heart beating again.

She was then airlifted to Vanderbilt Medical Center's emergency department, where doctors immediately used therapeutic hypothermia to cool Thornton's body temperature to between 93 and 86 degrees -- below the normal body temperature of 98.6 degrees.

Even though her heart was working again, doctors wanted to slow circulation in order to prevent the death of brain cells -- and, therefore, brain damage -- caused by prolonged lack of oxygen. Chilled water blankets were placed over Thornton's body and head, and medical personnel then used a machine to lower her body temperature for 48 hours.

"The patient received incredible care from the moment she experienced problems at the Bridgestone Arena," said Dr. Jared McKinney, medical director of LifeFlight Event Medicine. "It is only through a coordinated team effort that her successful outcome was possible."

After undergoing the two days of cooling therapy, Thornton's body temperature was slowly restored to normal. She regained consciousness and neurologically continues to improve, according to her doctors in Nashville.

On Friday afternoon, she was in stable condition, the Tennessee hospital said.

Her cardiologist, Dr. John McPherson, said that Thornton is undergoing a battery of tests to determine why she suffered the heart attack. He told CNN it appears she has an enlarged heart -- "a genetic condition that, unfortunately, has no warning symptoms and often results in an emergency situation like Thornton experienced."

Next week, she will have surgery to put an implantable cardioverter defibrillator in her chest. The device sends electrical shocks that will automatically kick in if her heart starts beating irregularly and restore it to normal, in hopes of preventing another heart attack.

"Without an AED, this patient would not have survived," Sims said. "It restored her pulse."

While she's thankful, it's all a blur for Thornton. And she hasn't gotten over not being able to see Lady Gaga strut and sing on stage.

"I am so mad I missed the concert," she said, according to a statement released by the hospital.

Tugman said Friday that she's grateful to have her friend back -- including after another scare Thursday night, when "all of a sudden she stopped breathing, her eyes rolled back and all those machines started going off."

"They came in and shocked her, and she came right back," said Tugman.