Engineering the end: How planning for loss helped a family through it

By Mike Mikula, Special to CNN 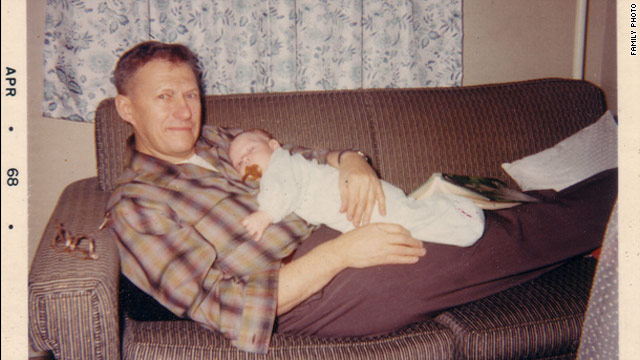 The author and his father in their earliest days together.
STORY HIGHLIGHTS

(CNN) -- Shortly before midnight on July 23, my father died in my arms.

He was in his bedroom, with two of his four sons and his wife of 44 years. His odometer stopped just shy of 92: a great life and a good death. He had always considered himself lucky.

Five days earlier, Emil Mikula made his wife, Peggy, breakfast before they went to Sunday Mass. Typical for him, he tended to some yard work after that. Later that afternoon, he experienced a pain in his gut so intense he went to the hospital. He would never stand on his feet again.

He'd been diagnosed with colorectal cancer 10 months earlier, and doctors were prepared to operate on him to remove the tumor. Now, surgery was the only way to repair the intestinal rupture that was killing him.

In both cases, Dad was adamant: "Do not cut me." He was unwilling to take the considerable chance of stroking out on the table and spending the rest of his life incapacitated and unaware.

"I want to go home." His voice was stern and strong. "I want hospice, and I don't want to be in pain anymore."

Calls were made, and soon a hospital bed was waiting in his home in Pinehurst, North Carolina. 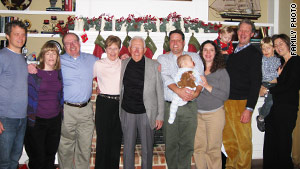 Emil Mikula, with his brood at Christmas 2008.

Stunned, but not surprised, I was there the next day with my three brothers, Kevin, Matt and Patrick. I thought we'd gathered to say goodbye, to have one last whatever it was with Dad.

Standing over his failing body, I was thankful that I didn't need to say goodbye. Thankful that I had always hugged him like I might never see him again. Glad I had seldom let him rush me off the phone.

My mind struggled to process the scene. All around him were stark reminders that the indignities of illness are unmoved by a life of good works: tidy stacks of medical supplies, various medicines and the notebooks chronicling their dispensing, never-to-be finished books and crossword puzzles, the smells of sickness.

When I was a child, Dad was a folk hero -- the smartest and strongest man in the world. Now he clung to a chrome bedrail. I broke down. He stirred as I failed miserably at composing myself. He smiled. "Hi Mike."

That night I read an e-mail from my friend Jeff, himself a veteran of the final march. "Pay attention," he wrote. "Something important is happening."

Even Martha Stewart might think my mother goes overboard with her planning. She is a retired schoolteacher, registered nurse and decades-long hospice volunteer. In choosing doctors, hospitals and treatments, she had always been a fierce advocate for Dad's health. Now she became a fierce advocate for his death.

To her, Dad's death, though heartbreaking, was as natural as it was inevitable. She knew the greater medical community often views death as defeat. She also had seen hospice patients die at home with the pain aggressively managed, not in a hospital with unmanaged expectations. 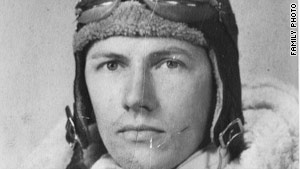 Being both painfully pragmatic and senior citizens, Mom and Dad made their wishes known. They wrote them down and spoke with us. They acted as their own death panel. But it was more abstract than creepy.

Dad had played golf five days a week, regularly shooting his age since his mid-seventies. I call my mom a "shark" because she never stops moving.

In the fall of 2009, however, months of intestinal discomfort led to the colorectal cancer diagnosis. Dad opted for mild chemotherapy. The surgical risks were unacceptable, but he wasn't conceding any putts yet.

The chemo slowed him down a few ticks. He retained his fine white hair and good looks, but he was smaller and less steady.

In early 2010, he stopped playing golf. He quit, not because he felt bad, but because he wasn't playing "worth a damn." There isn't a person alive who knew my dad when he didn't play golf. Now he stopped. And, for the first time, I'd allowed that he was going to die someday.

Someday became the Sunday Kevin called with news of Dad's hospitalization. He'd gone in before, but this one felt different.

Things moved quickly. I'm a professional, with understanding employers and a flexible schedule. I have a reliable partner in my wife, Sarah. Though struggling with her own grief, she and her mother took on our household and children.

My brothers were similarly fortunate, so we were all together. I wondered what death is like for those without such economic and domestic stability. Is it yet another measure of class distinction? Or is it a unifier -- we all do what we must when we must?

Dad was conscious and cognizant, so there was never a doubt or dispute about his wishes. But because we were prepared, I am certain we would have pursued the same course had he been incapacitated.

Within minutes of our arrival, Mom handed us a hospice pamphlet that might as well have been called, "So You've Decided to Leave Your Physical Body."

We mocked it, but we read it. It explained step by step how the body's systems shut down as death approaches, why Dad would take no food and little water -- they often cause pain and delay the inevitable. Additional hours and days would not equal additional life. They equaled more pain.

I'd watched my wife bear and deliver our two sons and marveled at the body, a perfect machine. Now I saw parallels. Sarah's body began changing after conception, its true mission activated as if she had just seen the queen of diamonds. My father's body was changing, too.

Astronauts don't just yank the keys out of the space shuttle when the mission concludes. Various systems come off line in a particular order.

Dad's organ functions slowed. He slept more, interacted less. He was barely in our world.

One afternoon the four of us struggled to change his bedding. We soon cracked ourselves up at the inability of our big brains and strong arms to perform this seemingly simple task. Dad griped. "Is this some kind of f---ing joke?" We got it together. He still wielded power.

After four days, we were ground down raw. I missed my children more than I could have ever imagined.

Friday afternoon I took Kevin to a pub. Kevin drinks less than a six-pack a year, but he said that was the best beer he'd ever had. Just getting away was productive and energizing. We would soon need all that.

Those familiar with hospice know that the employees who come into your home are the closest thing to angels. "Myrtle the Redneck" bathed Dad and worked the room. Nurse Nancy delicately examined Dad and, just as delicately, the rest of us. 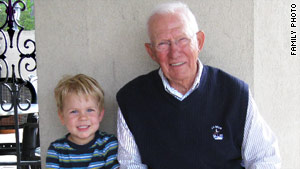 On an outing with his first grandson, Donovan, in 2008.

That Friday, Nancy noted the signs of approaching death. Dad's extremities were discolored and his breathing had changed. Which term is more unnerving, "death rattle" or "terminal respiration?"

His abdomen was distending and he had been more restless. The infection intensified. Nancy upped his morphine and we braced ourselves for a long night.

There was little communication with Dad now, but his eyes still sparkled for my mom. They looked at each other and cried. She told him it was OK to let go.

Matt and I took the late shift. Kevin slept and Pat returned to his family less than two miles away. Mom slept next to Dad's hospital bed.

Dad's attacks were coming about once an hour. He writhed and moaned. Morphine sulfite quickly calmed him.

The later it got, the briefer the respite from attack. Around 11p.m., he writhed so violently he nearly launched his failing body over the bedrails.

We rushed into the room. I held him, calming and securing his body. Matt readied the morphine. I thought to myself, how much more of this can he endure? How much should he endure?

BAM! Another attack. My left arm held him close, my right hand on his heart. It was failing. I locked on his fading eyes. The less his heart beat the more mine did. I whispered, "Go Dad. Go." He went.

As Dad would say, the week was not all "skittles and beer." Our emotions sometimes ruled us. There was stress and anger, hurt and despair, laughter and boredom. We struggled. Stiff drinks were taken.

The next day, I returned to my family in Atlanta. The August 2 New Yorker was waiting for me. If you've ever lost someone, you know that coincidences are as much a part of the process as baked hams, and sure enough, there was Dr. Atul Gawande's article, "Letting Go." Gawande wrote that our medical and cultural approaches to terminal illnesses make the experience my family just had the exception. Agony and hospitals are all too often the norm.

Some doctors indulge themselves and their patients into thinking that over an endless timeline, with unlimited finances, humanity's losing streak against death can be snapped. But every gambler knows the house always wins.

Lots of luck went into my Dad's "good death," but luck favors the prepared.

Mike Mikula is a writer and cartoonist whose "Cartoon Clicks" appeared on CNN.com from 2004 to 2010. His wife is an attorney at Turner Broadcasting.