Half of Americans use supplements 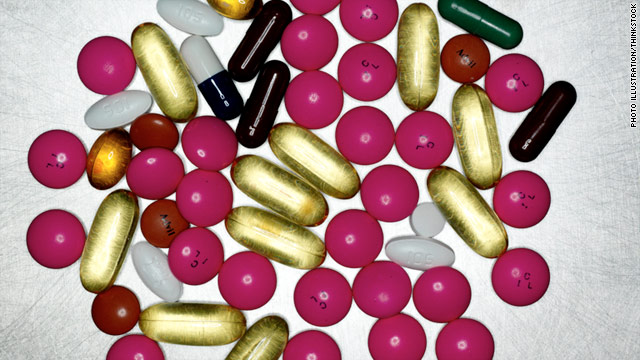 More than half of U.S. adults are using vitamins and supplements.
STORY HIGHLIGHTS

(CNN) -- As more than half of U.S. adults are popping vitamins and supplements, the question remains -- has it made Americans healthier?

That depends on whom you ask.

The Centers for Disease Control and Prevention said Wednesday that more of half of U.S. adults use dietary supplements -- including multivitamins, minerals and herbs.

Dietary supplements are not regulated by the U.S. Food and Drug Administration in the same way as drugs. The makers do not have to prove safety or effectiveness.

"We really don't know what's inside."

The most popular supplements are multivitamins, used by 39% of U.S. adults in 2006.

Some consumers mistakenly view supplements as a way to make up for a poor diet.

"It's a Band-Aid approach to think you can eat poorly and just take a vitamin and you'll be equal to another person who eats well and exercises and takes care of their health and gets regular checkups," Avitzur said. "There's no substitute for a healthy lifestyle."

Multivitamins can be an insurance policy if you don't get enough of specific vitamins, but it can't replace a healthy diet, she said.

Vitamin and supplement use in U.S.
RELATED TOPICS

"Depending on the supplement, the money on supplements can be better off spent on food," she said, suggesting wholesome fruits and vegetables that pack vitamins, minerals and nutrients.

Over two decades, researchers have seen increased use of calcium, vitamin D and folic acid.

Jaime Gahche, main author of the CDC report, and her co-authors analyzed responses from a sample size of 37,596, using National Health and Nutrition Examination surveys. Participants were asked what supplements they had taken in the past 30 days and submitted the product label to National Center for Health Statistics nutritionists.

Gahche said it was unclear from the data whether increased supplement use has made Americans healthier.

"With this data, we couldn't answer that," she said. "We can't make any causal relationships -- this is providing the estimates. I don't think we have any answers whether it's made us healthier or not."

Several epidemiological studies showed there was no significant difference between people who take supplements and those who do not, said Anding, a registered dietitian and director of sports nutrition at Texas Children's Hospital.

Just because it might not make a difference in public health, "it doesn't mean it's universally true for everyone," she said. Supplements could make a big difference for individuals who have certain vitamin deficiencies or food allergies.

Gladys Block, professor Emerita of public health nutrition at University of California Berkeley said, "I really believe that essentially everybody can benefit from a multivitamin."

Block wrote a research paper comparing a sample size of 1,000. Those who used dietary supplements had lower blood pressure, better plasma levels, and stress status than those who did not.

"They were healthier, in those respects and so, that's one piece of evidence," she said. "It doesn't tell the whole story. I believe there is evidence that people can be healthier as a result of taking vitamin and mineral supplements."

"It used to be most of the scientific world was against most types of supplement. That has changed over the last 15 years. A lot of people recognize the benefit of multivitamins. There is increasing support in the science, like folate, like calcium."

Certain dietary supplements such as vitamin D and fish oil have proven benefits, but others like bitter orange and vitamin B5 lack evidence.

Just because you can purchase it at a health store, it doesn't mean it's going to make you healthy, said Avitzur, neurologist and medical adviser at Consumer Reports said.

She advised consulting with doctors first about taking supplements.

"Consumers will hesitate sometimes when a doctor prescribes medications," she said. "They want to know about side effects, safety, and they ask good questions. When it comes to supplements, you should ask the same questions. Those things apply -- talk to your physician."

Some supplements can interfere with prescription drugs and too much can cause neuropathy and in severe cases, organ damage.

"Too much of a good thing, even supplements that are safe, can be bad for you," Avitzur said.