'Eye on the door': Life with autism wandering 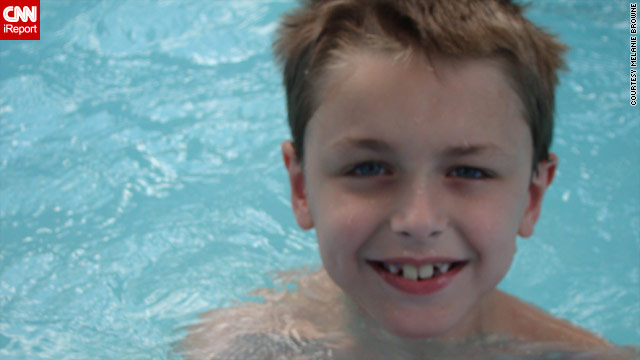 Michael Browne, who's almost 10 years old, has autism and has run away from supervision several times.
STORY HIGHLIGHTS
RELATED TOPICS

(CNN) -- Whether it's to a swimming pool or a doughnut store, Michael Browne knows where he wants to go -- and since he doesn't have the words to say so, he'll just dart off.

Michael, who's about to turn 10, has a severe form of autism. People with the developmental disorder typically have difficulty communicating and socializing. But another sometimes dangerous aspect of autism has received less scientific attention and causes endless stress for parents: A tendency to run away from home or adult supervision.

"We constantly have our eye on the door and on Michael, and it's a hard way to live," said Melanie Browne of Katy, Texas. "I think that's the hardest part of raising him, is just the wandering issue."

Autism groups are calling for greater awareness and study of what they call "wandering" or "elopement" behavior, referring to this habit of fleeing a place at any moment. Neither of those words accurately describes the phenomenon, but there's no better shorthand at the moment, says Dr. Paul Law, director of the Kennedy Krieger Institute's Interactive Autism Network.

Wandering is probably the leading cause of death among children with autism, Law said. Only limited data are available, but drowning seems most common among these fatalities.

Promoting an understanding of wandering in autism is important for Browne, who has dealt with police, teachers and neighbors who seem to blame her for Michael's behavior, as if bad parenting were the cause. And she feels misled by doctors who suggested that with enough early intervention, Michael's autism symptoms would markedly improve. Despite specialized programs beginning at age 2, he still can't have a conversation and has been prone to running off since age 4.

"They want you to dream big, especially when they're young. But then, when you realize your child is severe, there has to be some support for that, and you have to come to terms with that," she said. "You end up grieving more."

Toward greater knowledge of wandering

The Interactive Autism Network is looking for families affected by autism to participate in a survey regarding wandering behavior, as a step toward better understanding it. What differentiates those children who run away from those who don't? What triggers it? What helps stop it? These are all open questions.

Survey findings may affect the debate over a proposal to make wandering a specific diagnosis. It would give wandering that is related to autism and other developmental disorders a "diagnostic code," a classification for clinical and insurance purposes. A Centers for Disease Control and Prevention committee talked about the issue in March.

Browne, other parents and groups like Autism Speaks and the National Autism Association are supporting this effort. Autism spectrum disorders affect 1 in 110 children in the U.S., according to the CDC, but it's not known how common wandering is.

... when you realize your child is severe, there has to be some support for that, and you have to come to terms with that. You end up grieving more.
--Melanie Browne, mother of child with autism

A specific diagnostic code would help clinicians as well as police understand what the behavior means, gauge how frequently it occurs and allow for broader insurance coverage for interventions, such as tracking devices, advocates say. A diagnostic code is already in place for wandering in the context of dementia.

But the Autistic Self Advocacy Network joined several other organizations in writing a letter to the CDC against the proposal, partly because of a concern that a diagnostic code could put restrictions on people with autism in educational settings and elsewhere, leading to further isolation. The diagnostic code could also be used in situations where a child is deliberately trying to escape abuse and has no other way to express discomfort, these groups argue.

And among children, wandering behavior isn't unique to autism. A variety of different developmental disorders, such as attention-deficit/hyperactivity disorder, can also lead to children running off at any given moment, said Dr. Max Wiznitzer, a pediatric neurologist at Rainbow Babies & Children's Hospital in Cleveland.

Since there are so many associated conditions that begin in childhood, Wiznitzer does not find it appropriate to single out autistic wandering in the way that some groups are advocating. The CDC's proposal is not limited to autism; even so, creating a new code isn't sufficient for understanding what drives a particular person to bolt at any moment, Wiznitzer said.

For autism specifically, current codes and physician recommendations are sufficient for insurance coverage, he said. Wandering is a serious problem, but it should be studied more closely, he said.

"We need to investigate further and best determine how to best meet the needs of all children," he said.

Others say that a code for wandering in autism is necessary because the behavior may have particularly harmful consequences with this condition. A child with autism walking around alone may not be able to communicate with anyone who wants to help, said Geraldine Dawson, chief science officer of Autism Speaks.

In late March, a train struck and killed a 6-year-old boy with autism from Geelong, Australia, who had wandered from home, Australian media reported. In the U.S., at least eight children who have autism, ages 3 to 8, died after wandering in 2010, according to the National Autism Association. In February of this year, two children with autism drowned, the organization said.

Worst-case scenarios fuel the fears of parents like Browne every day. Michael has an obsession with water, as she wrote in her iReport in 2008, which means he might try to go swimming alone, or get caught in traffic along the way.

"You live in fear that he's going to get out, and then when he does, the police are going to be upset with you, even though you know you're a great parent," she said. "You're just hyper-aware."

There are a variety of reasons why children with autism may wander off; a common underlying factor is impulsivity, Wiznitzer said. They may feel stress or sensory overload from a situation and want to leave it; or, they may be attracted to a certain place and try to go there. An underlying condition such as anxiety should be treated, including with medication if necessary, he said.

Parents should also do whatever they can to prevent their children from wandering off alone, he said. The Browne household has deadbolt locks and an alarm system that beeps when any door or window is opened, which has kept Michael in so far. (The last time he got out, only the door had an alarm, and he found a spare key.)

Other parents equip their wandering-prone children with removable GPS tracking devices, such as a bracelet or anklet, so they can be found more easily. Michael's mother looked into that, too, but couldn't find any with a range wide enough for her son's unexpected travels. And as far as a name bracelet, she fears Michael would hurt himself trying to take one off.

Many times, as children get older, the wandering behavior improves, Wiznitzer said. But there's a subset of people who do not get better, and no one knows why.

Browne wishes there were more support for children like Michael who have severe autism. Her insurance stops covering therapy for autism at age 6, and the emphasis in many autism initiatives is on higher-functioning kids.

"You feel very isolated, and you feel alone, and when you do get help, it comes by accident," Browne said.

Browne recognizes that there are some children with even more severe autism, who have trouble with basic tasks. Michael is currently schooled in a self-contained classroom for children with autism because of the wandering behavior, and he takes medication. She's thankful for where he is, and she hopes for future medications that can help him with talking and socializing, and discourage wandering.

"They are not defective. They just have a different type of brain," she said of children with her son's condition. "I wish that people would realize that kids with autism, no matter how severe, have value."