When a headache really is a brain tumor 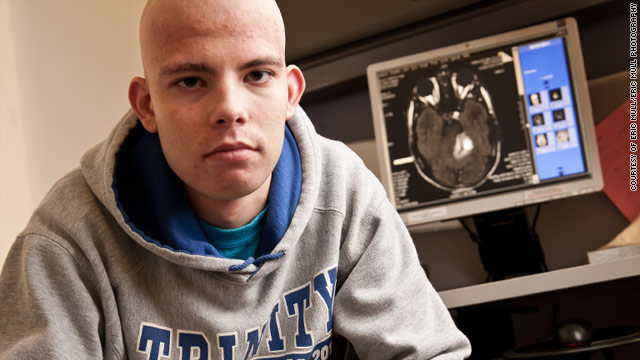 (CNN) -- It's become a classic scenario: You have a headache and after Googling it, you find out a headache can be a sign of a brain tumor.

That's what happened to Debbie Tonich when her son John's headache, diagnosed initially as dehydration or a flu bug, turned out to be a cancerous tumor. In this case, paranoia -- or some would call it mother's intuition -- paid off.

"I think I saved his life," Debbie says.

"They lasted 10 seconds, and I'd have to take a second and sit down or go stand off to the side," John remembers. "I had three or four of them a day."

At first his parents thought it was a concussion, since John had been thrown to the mat during his match. Two days later, when the headaches didn't go away, they took John to their family doctor in Parma Heights, Ohio. She diagnosed dehydration, which made sense to the family since John had been drinking less to fit into a lower weight class for wrestling. She drew some blood from John and told him to drink Gatorade.

2010: Playing ball after a brain tumor

Two days later, on Thursday morning, the headaches disappeared, but John was feeling nauseated. Debbie took him back to the doctor and asked if it could be a concussion, and John wondered out loud if it could be an aneurysm. They say their family doctor told them it was probably the stomach bug that was going around.

"As we were walking out the door, she handed us a prescription for a CT scan, and said, 'Just in case,'" Debbie remembers.

The Toniches never used that prescription.

The day after that second visit to the doctor, John texted Debbie from school that he felt dizzy. She picked him up and went right to the emergency room.

At the emergency room, John had a CT scan and then an MRI.

"The doctor came in and told John he had the worst possible cancer in the worst possible place and would have a year to live, or two at the most," his father, Joe, remembers. "We came in thinking he had a slight concussion and left with a death sentence."

John immediately went by ambulance to the Cleveland Clinic, where it turned out the situation wasn't nearly as dire as the ER physician had made it sound. It turned out he had a medulloblastoma, a tumor diagnosed in about 1,000 people every year, according to the American Brain Tumor Association.

Dr. Tanya Tekautz, John's doctor and co-director of the Pediatric Brain Tumor Program at the Cleveland Clinic, says 50 to 60 percent of children with the same type of medulloblastoma John has are still alive five years after their diagnosis.

John's family says the surgeon managed to remove the entire tumor, and he's now in a clinical trial receiving both radiation and chemotherapy.

The Toniches don't blame the family doctor for not figuring out John had a brain tumor, since headaches can mean so many different things.

"She went with what was logical," Joe says.

They're certainly glad, though, that they took matters into their own hands and went to the emergency room. Debbie says her son's illness just didn't seem like a flu, when someone usually suffers many symptoms all at once.

"Everything that went wrong was single things -- first the headaches came and went, then the nausea, then the dizziness. It just didn't make sense," she says. "If something doesn't feel right, keep pressing. Don't stop."

Of course, John's story is highly unusual; the vast majority of people who have headaches don't have brain tumors.

"Ninety-nine percent of the time, a headache isn't cancer," says Dr. Gene Barnett, director of the Brain Tumor and Neuro-Oncology Center, who treats adults at the Cleveland Clinic. "It's a stress headache or a migraine or sinusitis or something else benign."

For every 4,000 children who have headaches, one will have a brain tumor, according to Dr. Santiago Medina, co-director of the Department of Radiology's Division of Neuroradiology at Miami Children's Hospital.

Red flag No. 1: These headaches are new for you

If you don't usually have headaches, or if this is a different type of headache from the ones you usually have, that could be a warning sign, Medina says.

Red flag No. 2: Your headaches are accompanied by other symptoms

Barnett says he rarely sees a brain tumor patient whose only symptom was a headache. Most of the time, the person also has something else, such as nausea, dizziness, or vomiting. Sometimes the signs are even more obvious, such as seizures, difficulty speaking, weakness in the limbs, or problems with peripheral vision.

Red flag No. 3: Your headaches start when you wake up in the morning

Typically, when someone has a brain tumor, the headaches start in the morning often accompanied by nausea and vomiting and get better as the day goes on, Barnett says.

"Headaches that come on as the day wears on and get worse into the evening are typically not associated with brain tumors," he adds. "They're more associated with the stress of daily life."

Red flag No. 4: Your headaches get worse over time

If your headaches get worse over a period of days, weeks, or months, that could be a warning sign, Barnett says.

You can have none of these red flags and still have a brain tumor. If your inner voice, or your doctor's inner voice, says something is seriously wrong, listen to it.

The American Brain Tumor Association and the National Brain Tumor Society have more information on symptoms of a brain tumor.