Addiction to food, drugs similar in the brain 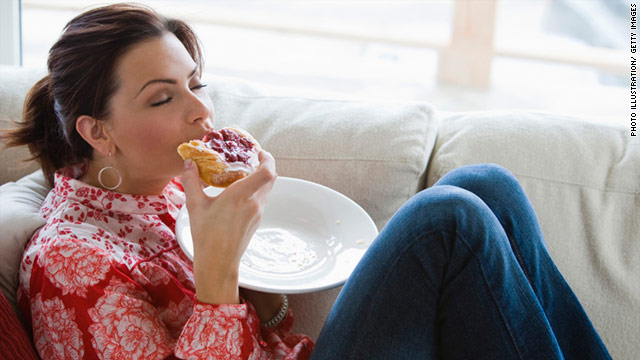 Those who often eat more than they'd planned anticipate food in much the same way that drug addicts anticipate a fix.
STORY HIGHLIGHTS
RELATED TOPICS

(Health.com) -- Ice cream and other tasty, high-calorie foods would seem to have little in common with cocaine, but in some people's brains they can elicit cravings and trigger responses similar to those caused by addictive drugs, a new study suggests.

Women whose relationship to food resembles dependence or addiction -- those who often lose control and eat more than they'd planned, for example -- appear to anticipate food in much the same way that drug addicts anticipate a fix, according to the study, which used functional magnetic resonance imaging (fMRI) brain scans.

When these women saw pictures of a chocolate milk shake made with Häagen-Dazs ice cream, they displayed increased activity in the same regions of the brain that fire when people who are dependent on drugs or alcohol experience cravings. When presented with the same milk shake, women who don't feel addicted to food showed comparatively less activity in those regions.

Once the women actually tasted the milk shakes, however, those who scored high on a food-addiction scale showed dramatically less activity in the "reward circuitry" of their brains than the other women -- phenomenon, also seen in substance dependence, that could lead to chronic overeating and other problematic eating behaviors, researchers say.

"It's a one-two punch," says the lead author of the study, Ashley Gearhardt, a Ph.D. candidate in psychology at Yale University. "First, you have a strong anticipation, but when you get what you are after, there's less of an oomph than you expected, so you consume more in order to reach those expectations."

The study, which appears in the Archives of General Psychiatry, included 48 young women with a wide range of body sizes who had signed up for a program aimed at helping them control their weight and develop better eating habits.

Each of the women filled out a 25-item questionnaire, adapted from assessments for drug and alcohol dependence, in which they were asked how strongly they agreed with statements such as "I find myself continuing to consume certain foods even though I am no longer hungry" and "When certain foods are not available, I will go out of my way to obtain them." They were also asked to identify any foods -- from a list including ice cream, chocolate, chips, pasta, cheeseburgers, and pizza -- that gave them "problems."

Then the researchers brought on the milk shakes, made with four scoops of Häagen-Dazs ice cream and Hershey's chocolate syrup. While their brains were being scanned, the women were shown a picture of the milk shake to whet their appetite; five seconds later, they got to taste it. (As a comparison, each of the women was also shown a picture of a glass of water followed by a tasteless beverage.)

In addition to exhibiting patterns of craving and tolerance similar to those seen in drug addiction, the brains of women who scored high on the food-addiction scale showed less activity in areas responsible for self-control, which suggests that their brain chemistry may prime them to overindulge, Gearhardt says.

"It's a combination of intense wanting coupled with disinhibition," she says. "The ability to use willpower goes offline."

The junk foods that are most likely to trigger cravings may be part of the problem. Over the past several decades, many foods have become less natural and more heavily refined, as sugars and fats have been added to make them tastier and more satisfying, says Gene-Jack Wang, M.D., a senior scientist at Brookhaven National Laboratory, in Upton, New York, who studies the brain's role in obesity and eating disorders.

"Natural foods take a long time for the body to absorb," says Wang, who was not involved in the study. "But the added sugars hit the brain right away."

Health.com: Do fatty foods act like cocaine in the brain?

Some people, Wang adds, might be especially vulnerable to developing a dependence on such foods. "They may be genetically hardwired to like certain foods and to absorb them faster," he says.

Over time, however, a person's food of choice becomes less important as the cycle of dependence takes over, Gearhardt says. "At first you want it because it tastes good," she explains. "But as you go from use to abuse to dependence, you begin to crave it and liking it doesn't play as much of a role."