The little black dress of fitness 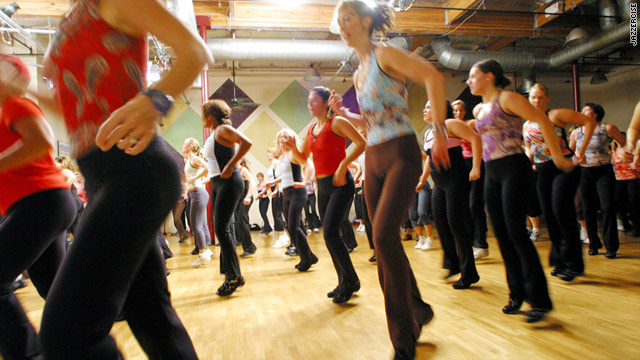 The problem is the CEO of Beachbody, the company behind P90X and Insanity, doesn't like to work out. So much so that he sometimes has to "trick" himself into the gym. Like the time he decided he couldn't brush his teeth before he worked out for at least 10 minutes. That little ploy inspired Beachbody's 10-Minute Trainer program.

The fitness industry is constantly coming up with similar tricks to get more of us off the couch, Daikeler said.

The result is a rotation of incoming and outgoing trends -- from Jane Fonda's VHS tapes in the early '80s to Beachbody's DVD programs that are popular today.

Daikeler compares fitness to fashion. "Somebody starts wearing a certain shoe in Milan or Japan and suddenly everybody wants to wear it," he said. "It doesn't just solve the problem -- like shoes cover your feet. It makes you feel like it's (a part of) your identity."

Starla Kay teaches youth video classes at the Indiana Black Expo in Indianapolis. She has a 19-month-old son and not a lot of time for a workout program that doesn't work. 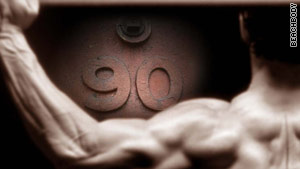 She tried kickboxing, aerobics and just going to the gym, but nothing really stuck until she got one of this year's hot trends, P90X.

"This is the first actual program I've done," she said. "I feel stronger. I feel like I have more energy. I've lost 9 pounds so far."

The American College of Sports Medicine publishes a yearly survey of the top worldwide fitness trends. The top 10 list for 2011 includes boot camps and programs aimed at older adults.

Trends depend on many factors, said the survey's lead author, Walt Thompson. Take Pilates, which dropped off the survey's list from No. 9 last year. Thompson believes the economy made Pilates equipment and specialized instructors too expensive for clubs to maintain. He's not sure if Pilates will make a return to the top 20, but he doesn't expect a few of this year's trends to stick around long.

"The problem with the high-intensity kind of programs is that they deliver a punch like severe weight loss programs do, but they're difficult to comply with in the long haul," he said.

A huge key... is to make people feel like 'Wow, I get it.'
--IDEA editor-in-chief Sandy Todd Webster

"The reason why programs like that don't stick is because they're too hard to do," she said. "The things that really stick are programs that cross over multiple (ability) levels."

Kay said when she first attempted the P90X DVD program it was "too much" so she dropped it after two weeks. But when she started attending a class with an instructor who taught her how to modify the moves, she found herself returning six days a week at 7 a.m.

Behrend cites classes like Zumba, body pump and spinning as success stories. They're consistent, easy to follow and include that always important element of fun.

IDEA is the world's largest association for fitness and wellness professionals. It also does a yearly survey of fitness trends. This year, aerobics, water fitness and martial arts-based classes had the largest decline in popularity. Dance and boot camp classes showed the largest growth. 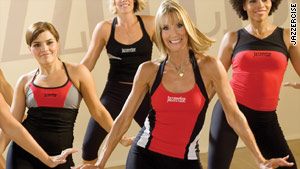 Judi Sheppard Missett, right center, continues to choreograph all the routines for Jazzercise.

Jazzercise is one of those trends that stuck. Judi Sheppard Missett founded the company in 1969 and the dance-based classes are still popular across the world. In fact, Entrepreneur Magazine recently named Jazzercise 2011's most successful fitness franchise.

"It's not like you can take a six-week course and be fit the rest of your life," Missett said. "It's really good that people are coming up with different ways to move. I'm happy for anybody doing anything, anything that gets them off the couch and on their feet."

She continues to choreograph routines to approximately 30 new songs every 10 weeks to keep her high member retention rate.

It is the beauty and curse of the industry, Behrend said. Old trends evolve into new ones, forcing gyms to stay cutting edge, but keeping customers excited about working out.

"The trick only lasts so long," Daikeler said, going back to his fashion analogy. "The best designers aren't looking for trends; the best designers set the trends. Will this capture a market audience or is this like Lady Gaga's meat dress?"

Daikeler said he just hopes whatever the industry comes up with next is the end of the biggest trend in America right now: obesity.