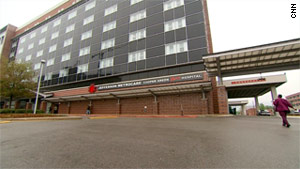 (CNN) -- Alabama health officials seeking to find the source of bacteria suspected in the deaths of nine hospital patients and the sickening of 10 others announced Thursday they found the same bacteria in a pharmacy in Birmingham.

"Looking at the DNA fingerprints, that organism is an exact match of the organisms that the patients had, so we know it wasn't inserted after it left the pharmacy," Dr. Don Williamson told CNN.

The pharmacy, IV Meds, of Birmingham, had prepared the intravenous feeding solutions that were administered to all of the patients in six hospitals in the state. Bacteria in their blood matched bacteria in a bag of the suspect product found in the pharmacy, he said.

"Now it's just a matter of identifying the source of it from the pharmacy other than from the bag," said Dr. Mary McIntyre, a medical officer with the Bureau of Communicable Disease within the Alabama Department of Public Health. "That's still ongoing."

She said the same bacteria -- called Serratia marcescens -- were also found on a swab from a water faucet inside the pharmacy. McIntyre described IV Meds as a small business that had one full-time staff pharmacist. The company's website has been taken down and calls to the business have gone unanswered.

The bacteria themselves are ubiquitous in the environment, but rarely found in blood, she said. "It's on all of us. What you're looking at is what kinds of practices of sterile technique were followed and what kind of processes were followed."

The goal is to put together a probable chain of events that led to the solution becoming contaminated and to then put into place practices to ensure that it does not recur, Williamson said.

But he said it is unlikely that investigators will ever be certain of what happened. "I think the reality is, the best we'll end up with is a highly probable reason for infection," he said. "You're never going to be able to get the smoking gun."

The match between the bacteria found in the IV bag and those found in the patients "is pretty close to a smoking gun," he said. But how it got into the bag from wherever it was in the environment is likely to be a "most probable pathway, not a certain pathway."

Meanwhile, investigators have uncovered more details about the nature of the illnesses. Of all of the patients who this month received the intravenous feeding solution, also called total parenteral nutrition -- or TPN -- 35% of them were sickened, Williamson said.

None of the seven children who received TPN were infected with the bacteria, a fact that has intrigued investigators. "That may have to do with some issues in how things were processed in the pharmacy," Williamson said. Ongoing cultures of samples tested in the pharmacy may help clarify matters, he said.

But moving from numbers to a definitive cause will not be easy, he predicted. "It's relatively easy, I think, to quantify the numbers. It becomes a lot harder as you try to move from simply, 'These are the numbers' to 'How did this happen?'"

The outbreak resulted Thursday in the filing in Autauga County Circuit Court of a civil lawsuit against IV Meds for wrongful death related to one of the fatalities, Mary Ellen Kise. A man who answered her telephone referred a caller to her lawyer, Jere Beasley, who told CNN he has been contacted by six families.

"The ultimate responsibility has to lie with the company that manufactured and distributed the product," he said. "As far as how it got to that point where they're putting out a defective drug, one that creates a hazard and is dangerous, we'll find out as we go."

He acknowledged that the health department has yet to determine the cause of the outbreak, but said he had no doubt. "You've got 19 people that we know were affected; we know six died and we know that all of them were getting this particular product. So, it's pretty simple to figure out that the product caused the infection."