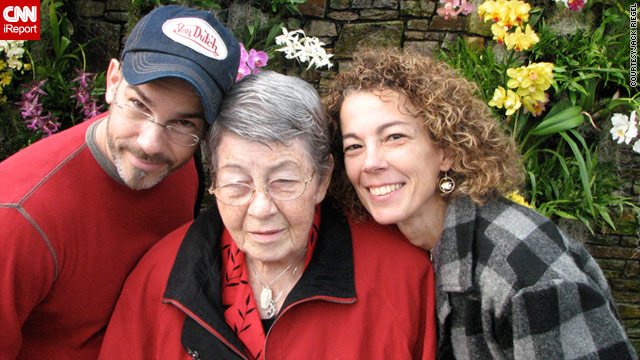 (CNN) -- One minute, Sam Cohen, 80, points to photos of his kids and talks about how his son wanted to become an actor.

The next minute, he unravels.

Cohen, a former New Jersey taxi driver and ironworker, is convinced his family will steal his money. He talks about escaping to Israel. He ignores his grown children's pleas to take his medication -- he tells them they've been brainwashed. And he threatens his wife, Haya.

"He is starting to make Charlie Sheen look rational," said his son, Michael Cohen, about his dad's Alzheimer's disease.

Earlier this month, he went from paranoid to physically violent. An attack on Haya put Cohen in a hospital psych ward.

Sometimes, verbal rants, as in Cohen's case, escalate, leaving families in a bind. What can you do when your loved one with Alzheimer's becomes physically aggressive?

To share patient experiences, CNN Health asked the iReport community how they have dealt with the challenges of Alzheimer's. Some described being cursed, kicked, slapped and bitten by their loved ones, who cannot understand their actions because of their disease.

"If you don't understand what's happening because your brain is not functioning, it can be scary," said Beth Kallmyer, senior director of constituent services at Alzheimer's Association. "It's normal human behavior. You might act out, become agitated, or violent if you don't know what's going on." 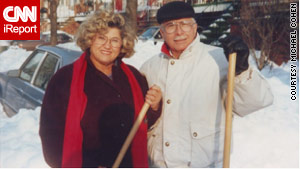 Before the Alzheimer's disease, Sam Cohen had never struck or hurt his family and his wife, Haya.

Earlier this month, Cohen, who got an Alzheimer's disease diagnosis in 2010, got into a heated argument with his wife. He snatched a pot from the kitchen and smashed the glass of water his wife had been holding. The glass shards cut her hands and she called 911.

"We're at a loss," his son said. His father had never before behaved in such a way.

"It's like the 'Invasion of the Body Snatchers,'" said the younger Cohen, who submitted an iReport about his family's struggles. "It looks like Dad, sounds like Dad, but it's not Dad."

His mother continues to be his primary caregiver, but is "very nervous just about being around him," Cohen said.

While the younger Cohen is also anxious about his father's behavior, the family agreed. "We don't want to just warehouse him."

"We feel pretty alone and we don't know what to do," Cohen said. "The hard thing is getting my mom to heed the advice of experts -- even though he got violent with her -- she doesn't really take advice from experts. So nothing's being done."

Caregivers are often overwhelmed and being on call round-the-clock leaves their patience in tatters. They may deny the problem, although aggressive behavior often reoccurs.

In 2008, a 74-year-old Kentucky woman with Alzheimer's shot her daughter-in-law with a gun hidden in the home. A Connecticut woman was fatally beaten with a hammer by her 85-year-old husband, who had Alzheimer's.

The violent behavior leaves caregivers conflicted about their own safety.

It was a struggle for Roxanna Zamora, who takes care of her 81-year-old mother, Peggy Zamora, at their Virginia home. 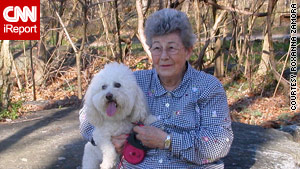 Although Peggy Zamora was fiercely protective of her bichon frise, Angel, she became violent because of Alzheimer's.

Starting in 2008, Zamora who has Alzheimer's, would curse and berate hired caregivers, hurl objects at them and lock them out of the house. Every day, she would kick, bite or punch whenever her daughter and son-in-law, Jack Riegel, tried to help her undress or use the restroom.

"She understood that this was total loss of dignity," said Riegel, who submitted several iReports. "She had no control over it. I think the problem was she understood enough and had no way to lash out except physically."

They would dodge her blows. They kept objects out of reach so she couldn't throw them. They hid all the knives in the house.

"Of course it was pretty disturbing," said her daughter. "It was hard to feel close to her, because she was so combative and mean sometimes. You just have to keep remembering it is a disease."

They noticed her striking her beloved dog, Angel, with enough ferocity to knock the bichon frise over. Her violent period lasted almost 18 months. They had to keep an extra eye on the pets to make sure it didn't happen again.

Earlier in her life, Zamora had been an adventurous woman who had become a licensed pilot in her teenage years and raised five kids in El Salvador. She trotted the globe, visiting more than 50 countries.

Now, she could barely navigate her house. 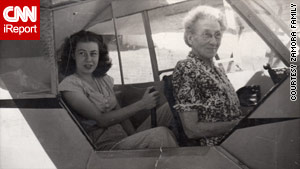 Peggy Zamora, left, in her teenage years learned to fly an airplane. Her grandmother is seated in front.

Zamora would wake up in the night sobbing, insisting that a little girl had just been dragged into a barn and killed. The stories grew more elaborate and horrifying, she sometimes was inconsolable.

Those symptoms eased after her neurologist prescribed antidepressants.

Today, Zamora is seems to be more peaceful.

The challenges of Alzheimer's never wane, the iReporters said. They've joined support groups, reached out to local organizations and sought weekly breaks. They stressed the need to find a good doctor and help with caregiving.

For emergency situations that could become violent, Alzheimer's experts offered these tips to placate a patient.

Most of the time, the incident escalates when the patient does not want to do tasks such as undress, brush teeth or bathe.

"No one ever died from not bathing," said Geri Hall, advanced practice nurse at the Banner Alzheimer's Institute in Phoenix, Arizona. "Relax and calm down about it. If the patient means no, they mean no, and you have to heed that."

Patients lose their ability to reason, so don't try to negotiate. Try again later when the person's mood has improved.

2. When the patient is upset, apologize -- even when it's not your fault.

"You apologize because the patient is upset," Hall said. Using this strategy will buy you time and good will.

Don't argue with an Alzheimer's patient, because you can't win. Don't physically force the person to do anything, she warned. This could worsen the situation and possibly injure all parties involved.

3. When the patient becomes agitated, change the topic.

Move to another room to see the birds or something he or she usually enjoys. Talk about something the person enjoys while remaining calm.

"If you can stay calm, you can mirror that calmness back to them," Kallmyer of the Alzheimer's Association advised.

4. Keep in mind that the world is distorted for an Alzheimer's patient.

The patient is sensitive to noise and easily fatigued.

"They become exhausted trying to follow on a day-to-day basis," Hall said. "Without a rest period, it's like you didn't get a toddler to nap. They are increasingly irritable and they are confused late in the day. That's called a sundown syndrome -- when they may become agitated and aggressive."

Call 911, if the patient or you are at risk for injuries. When a patient sees a uniform, he or she is likely to feel reassured about his or her safety, Hall said.