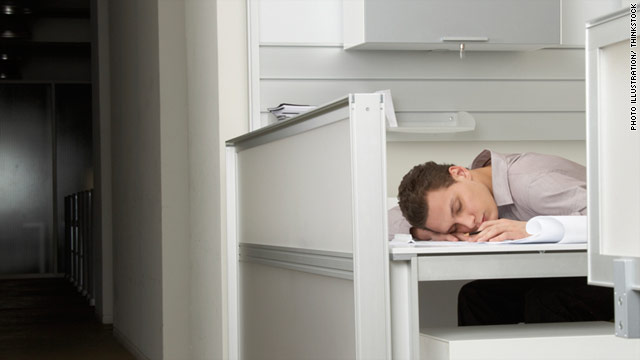 With biology beckoning their bodies to sleep during the night, shift workers say staying awake is always a struggle.
STORY HIGHLIGHTS
RELATED TOPICS

(CNN) -- Gregory Jones begins his day when his family and the rest of the world winds down and gets ready for bed.

The New Jersey truck driver reports to work at 8 p.m. He loads, stacks and transports vegetables and fruits until 4 a.m.

"I don't get eight hours," Jones said about his workday sleeping habits. "Sleep for me is a privilege. It's a blessing if I can get it."

Night workers like Jones are at higher risk for heart disease, diabetes, and other conditions. With biology beckoning their bodies to sleep during the night, shift workers say they struggle to stay awake no matter how many years they've done it.

When sleep prevails, there can be major consequences for others as well.

The controller, a 20-year veteran who was suspended, told investigators that he had fallen asleep, according to the National Transportation Safety Board. "He had been working his fourth consecutive overnight shift (10:00 p.m. to 6:00 a.m.)" according to a statement from the agency.

"Human fatigue issues are one of the areas being investigated," said the board's statement.

While it's terrible that the employee fell asleep, it's not fair to solely blame the worker, said Jeanne Geiger-Brown, an associate professor at the University of Maryland School of Nursing who researches shift work and sleep.

About 16 percent of the workforce participate in a type of shift work.

"We have to look at the way work is organized so people on the night shift are safe and effective on the job," she said. "The knee-jerk reaction of blaming the person who falls asleep is not really looking at the big picture."

Accidents tend to happen late in the night or in the early morning -- as it did with the Three Mile Island disaster in 1979 and the Chernobyl disaster in 1986.

It's unnatural for humans to be nocturnal -- no matter how much coffee is consumed.

Working the night shift can strain the social life and family time. Adjusting between weekends and work days can also wreak havoc on their sleep schedules.

Humans are wired to sleep at night by their circadian rhythm, a 24-hour cycle that brings about physical, mental and behavioral changes in the body. The circadian rhythm affects sleep cycles, hormone releases, body temperature and various processes.

"If you're trying to alter your natural body rhythm, we don't adjust perfectly to that," said Dr. Nancy Collop, director of Emory Clinic Sleep Disorders Center.

Even when night shift workers try to sleep eight hours during the day to be ready for work, they don't get enough sleep, she said.

When Jones, the nighttime trucker based in South Amboy, New Jersey, has a stretch of eight hours in the daytime to sleep, his body won't allow him.

"I will wake up after four hours," he said. "I'm wide awake. I can't go back to sleep. That has to do with the sun is out and the birds are singing."

There are exceptions, of course. Some people thrive during the dark and are natural night owls, but for most people, staying awake through the night is "trying to do something their bodies don't want to do," said Collop, the president-elect of the American Academy of Sleep Medicine.

"Our circadian rhythm wants us to sleep at night," she said.

After 10 years on the night shift, Jones said the pay difference between the daytime shift is worth the sacrifice. But many night shift workers pay a price in their health.

Jones has tried to avoid those risks by exercising two hours a day.

"I've seen guys who seem to have deteriorated," he said about co-workers. "I see the toll it has taken on them. They've gotten heavier, have different aches and pains. I've learned to deal with it and just not to count the hours."

Sleep deprivation could be also be a major factor in obesity. A study from Columbia University found that people ate up to 329 more calories a day when they were sleep deprived.

"You're not even mindful that you're not eating healthy," he said, adding that he started relying on vending machines. "You're just grabbing stuff because you want to eat at night. You get caught up in the lifestyle -- you're just sleeping, you work, you sleep, work, sleep and you're not exercising and eating right."

Hayes has lost most of that extra weight and is trying to eat a more balanced diet with fruit and water.

What could also contribute to metabolic disorders and obesity is that the body's rhythm may be off kilter to properly break down a hamburger at 3 a.m., said Giles Duffield, a University of Notre Dame biologist.

One of the liver's function is to digest food, absorb nutrients and get rid of toxic substances. The liver may not have sufficient level of enzymes to break food down and store nutrients at that time.

"A lot of enzymes found in the liver are rhythmic," Duffield said. "[The enzymes] are expecting food in the time you'd eat. The liver expects fats and sugars during the daytime not the nighttime."

The Chart: Tips on dealing with sleep and the night shift

But one upside of the night shift is that it gives Hayes flexibility in the day to run errands, pay bills and take his kids to doctor's appointments.

"It works for me," Hayes said about his current schedule. "It may not work for everybody. I try to have a positive mindset, keep my mind focused on what I have to do."