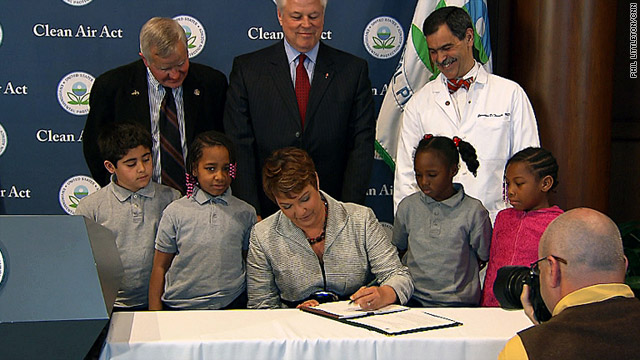 The move came in response to a court-ordered deadline and would require many power plants to install pollution control technologies.

"Today we're taking an important step forward in EPA's efforts to safeguard the health of millions of Americans," EPA Administrator Lisa Jackson said at a press conference to sign the new order.

Jackson said the new standards would "prevent 91% of mercury in coal from being released in the air."

The D.C. Court of Appeals ordered the EPA to make the rules final by November. Companies have three years to comply, but some could get a one-year extension if the technology cannot be installed in time.

The Power Plant Mercury and Air Toxics Standards are expected to have broad health benefits, according to the EPA. The pollution control methods are expected to prevent 17,000 premature deaths and 11,000 heart attacks. The EPA said it would also help eliminate 10,000 cases of childhood asthma.

The announcement was hailed by the American Lung Association and several groups of doctors who spoke at the press event.

A group of second-graders from Amidon-Bowen Elementary School in Washington, D.C., joined EPA Administration Lisa Jackson as she signed the new guidelines.

Dr. Marian Burton, the president of the American Academy of Pediatrics, told the students, "I think you already know this rule is for you and for all the children in the America who will follow you.

"Dirty air makes people sick. That's the long and short of it," Burton continued. "If you think it's expensive to put a scrubber on a smokestack you should see how much it costs to treat a preventable birth defect."

Jackson said the instillation and maintenance of the pollution controls would provide jobs as well as health benefits. "These are good labor-intensive jobs that cannot be shipped overseas," she said.

"We estimate impact on utility bills that are pretty minor, three to four dollars a month," Jackson said. Those costs to companies and consumers she said would be far outweighed by the benefits.