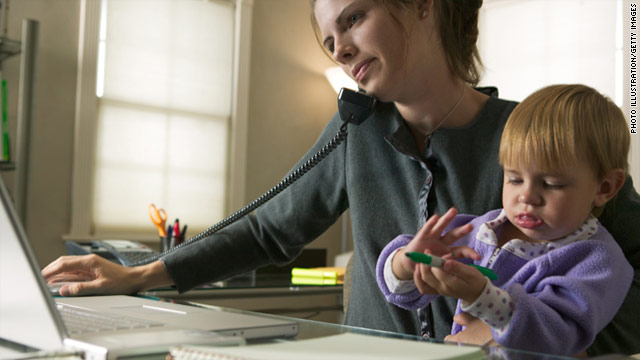 Researchers were surprised by the differences in how men and women responded emotionally, even when they were equally adept at managing home and work.
STORY HIGHLIGHTS

(Health.com) -- Thanks to our BlackBerries, iPhones, and iPads, the line between work and family time is getting blurrier. But a new study suggests that women feel 40% more distress than men when family life is frequently interrupted by these electronic devices or other types of contact, despite being under the same amount of work pressure.

In fact, when co-workers contacted them at home, women felt guilty about it twice as often as men, even if the communications didn't actually interfere with family life. The survey, which included more than 1,000 U.S. workers, was published this week in the Journal of Health and Social Behavior.

Health.com: 12 ways to fight stress and help your heart

According to lead author Paul Glavin, a doctoral candidate in sociology at the University of Toronto, the researchers were surprised by the differences in how men and women responded emotionally, even when they were equally adept at managing home and work. The guilty feelings may explain why women feel more distress than men about being contacted at home, the researchers say.

"We examined the extent that work actually interfered, and our results were focused on controlling for all those factors," says Glavin. "At the end of the day, the only thing left was guilt, and that's where the distress came in. We can only speculate about why."

One theory, says Glavin, is that while women's work roles have dramatically changed, many still hold - perhaps subconsciously- the view that a woman's priority is at home with her children.

"There's still some way to go before we see equality of expectations in work and in family," says Glavin.

"More women of my generation had stay-at-home moms," says Connor, 54. "Your role model met you at the bus stop, had dinner on the table. It adds to the guilt if you think, I'm not doing for my children what my mother did for me."

In other words, even for women who are meeting their responsibilities at home, they see themselves as falling short of the ideal if they let work interrupt their family time.

Connor recommends that men and women set boundaries between work and home -- for example, checking email no more than once an hour. And women need to be realistic about the work/home balance, because guilt often comes from unrealistic expectations -- from believing you have to do more when you are already doing enough.

"What you can do is be engaged as fully as you can be when you are at home," she says. "Sit on the floor and make a puzzle with your child."

She also recommends leaving the BlackBerry in the other room to limit interruptions. "It's tied to well-being," she says. "These negative feelings impact mental health, and stress has implications for physical health."

Each participant was asked to describe his or her work and home life: how often they were contacted at home by their job, whether that contact caused a conflict with their family responsibilities, and how often they were given more work than they could finish in an eight-hour day. The researchers also measured psychological distress by asking how often the men or women felt guilty and if they had trouble keeping their minds on a task.