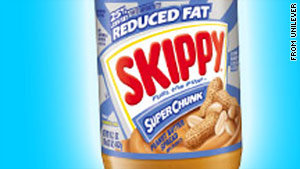 While there have been no known illnesses, the recall was issued for fear that some of the peanut butter now in stores had salmonella.

The press release said that Unilever acted after inspectors conducting "routine sampling" found that "finished products may contain the bacteria." There was no indication of where exactly the contamination was found, its severity or what steps were being taken to address it beyond the recall.

The Englewood Cliffs, New Jersey-based company issued the recall in conjunction with the Food and Drug Administration, which posted a copy of Unilever's statement on its government website.