Taste: It's in your nose and memories 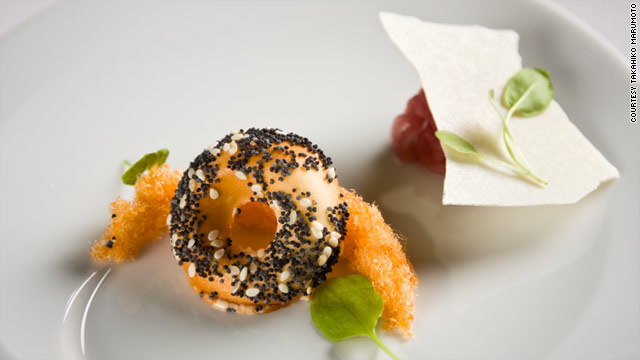 The "everything bagel" at wd~50 in New York plays with your mind and taste buds.
STORY HIGHLIGHTS
RELATED TOPICS

(CNN) -- It looks like a small "everything bagel" and lox. But bite into it and, to your amusement, it's ice cream.

If you close your eyes and let the aromas sink in, it's all the same flavors you remember of your favorite seed-covered bagel with cream cheese and smoked salmon.

"It's important to have a sense of humor," said Wylie Dufresne, chef and owner of wd~50 in New York. The former "Iron Chef America" contender serves up this deceptive concoction at his Manhattan restaurant.

"We often play with perception," he said. "We take familiar foods and serve them in unfamiliar ways. ... We try to stay true to the taste memory."

Humor and memory might not be the first words that come to mind when planning tonight's dinner, but this kind of creative thinking has earned Dufresne wide acclaim in the food realm.

And it's true that taste isn't just about the way food hits your tongue; there's a whole science behind how we perceive flavor and develop preferences for certain foods.

Dufresne is just one cutting-edge chef who consults with scientists to create innovative dishes that defy expectations and play with the senses. Scientists and chefs have a lot to learn from each other, said Gary Beauchamp, a biologist who leads the Monell Chemical Senses Center in Philadelphia.

Eatocracy: 'Molecular gastronomy' is off the menu

Here are some of the lessons from science that may help you think about eating in a new way:

If you're pregnant, you may be transferring preferences for certain flavors to your baby right now. The food you eat gets into the amniotic fluid and flavors it. The fetus can detect those flavors and remember them after birth, Beauchamp said. This also happens with breast milk when a mother nurses an infant. As children get old enough to eat solid food, they show a preference for flavors they first experienced in the womb.

It works for flavors like carrot juice, but not for something like salt, since the amount of salt a mother eats doesn't affect the saltiness of amniotic fluid or breast milk. It's actually the smell component of flavors that gets transferred. Mothers can enhance a child's liking for healthy foods such as vegetables by eating them while pregnant and nursing.

In general, experience informs taste preferences, so if you know you've liked salty foods in the past, you're going to want them again. If everyone collectively moves toward a low-salt diet, people will begin to crave it less, Beauchamp said.

And these preferences can begin from infancy. Babies fed starchy table foods high in salt showed elevated preferences for it, he said.

You may have seen a textbook diagram of a tongue with a "sweet" spot on the front, "salty" areas on the sides and a "bitter" zone in the back. It's true that these areas are a bit more sensitive to those flavors, but in reality, there's no clear-cut map of which parts of your tongue taste what, Beauchamp said.

In fact, there are taste receptors in the back of the throat. This was shown in a case of a woman whose tongue needed to be removed, and she could still sense flavors, he said.

A lot of what you perceive of flavor is actually aroma, scientists say. At the recent American Association for the Advancement of Science conference, Jane Leland of Kraft Foods' research and development group demonstrated this by having the audience pinch their noses while eating a yellow jelly bean. The candy was nearly tasteless.

What's going on? Basically, when your nose isn't closed up, the aroma of the food from your mouth is going through the back of the throat to the nose to give you the full flavor experience. When you block off the front part of your nose, it's like closing off the end of a hose and the water is no longer flowing, Beauchamp said.

4. Nostalgia while eating relates to smell

Many people have powerful memories of particular flavors from childhood, and re-experiencing them in adulthood can instantly bring back moments from years past. Marcel Proust famously begins "Remembrance of Things Past" with a description of biting into a small cake called a madeleine and being overwhelmed with sensations of prior times.

That's because the olfactory sense is perhaps the most primitive one, and the anatomical connections between smell and emotions are more direct than for other senses, Beauchamp said. However, there hasn't been concrete research on precisely how this phenomenon works, and it's hard to study because each person's experience is unique.

5. We evolved to "like things that are bad for us"

People desire fats to store energy, but over the long run, too much can cause cell damage and shorten life, White House pastry chef William Yosses told the science conference last month.

"We are hard-wired to like things that are bad for us," he said.

Our ancestors probably didn't live to age 50, so they sought out salts and fats without regard for the consequences of a bad diet -- hypertension, heart disease and stroke -- in middle to old age, Beauchamp said.

And there's been plenty of warning about salt recently. In January, the federal government unveiled new guidelines recommending that African-Americans, everyone over age 51, and people with a history of hypertension, diabetes or kidney problems restrict their daily salt intake to half a teaspoon. For everyone else, it's about one teaspoon.

Salt enhances sweetness by inhibiting bitterness, Beauchamp said. One of the reasons you find salt everywhere is that it reduces the bitterness of vegetables, making them tastier. 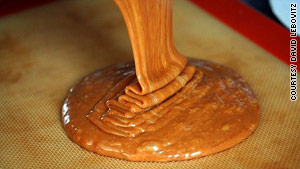 6. Yes, you can reduce fat and salt without losing flavor

There are two strategies for addressing the salt problem: creating salt substitutes and coaxing people to shift their preferences, he said.

And what about reducing bad fats? Chefs can develop delicious recipes that aren't laden with fat and may even have a cleaner flavor, Yosses said.

Chocolate mousse, for instance, usually contains a combination of egg yolks and cream that creates a smooth, rich feeling on the tongue -- and could also cause molecular damage to arteries, he said.

Yosses' solution: Replace the cream and yolks with with a different protein. Water and gelatin, together with chocolate, make a mousse that's still creamy, but it's healthier and you can taste more of the chocolate.

And David Lebovitz, former San Francisco Bay Area pastry chef who now writes cookbooks in Paris, advocates minimalism. Even a few grains of salt can make a difference -- put them on top of, not in, your culinary creations, he said. It provides a contrast in your mouth to the sweetness of chocolate or caramel, for instance.

"I don't use substitutes," he said. "You can substitute carob for chocolate, but it's not chocolate. I don't think you should really trick people."