Who controls the thermostat in your home? 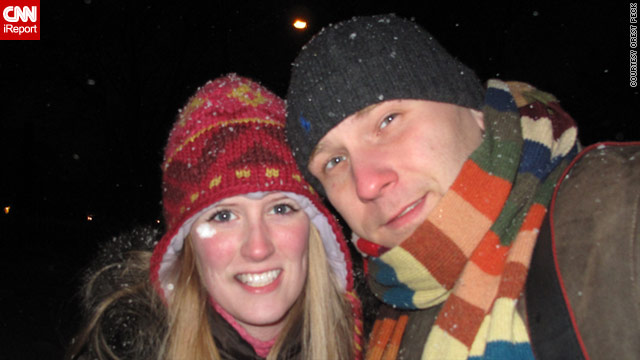 Michelle Ladyzhynsky and her husband, Orest, argue all the time about the temperature in their home.
STORY HIGHLIGHTS
RELATED TOPICS

Many an otherwise blissful couple have found themselves getting hot over the thermostat.

Anecdotally, it seems like most people who feel they're on the "always cold" side of relationships are women. There's not much science to support a physical explanation, but social preferences may come into play, experts say.

Indoor temperature has been one of the main points of contention between Michelle Ladyzhynsky and her husband, Orest, since they moved in their West Hartford, Connecticut, house in November 2009, Michelle says. Just a couple of degrees can make a big difference for her.

Ladies, it might not be all in your head.

A study published in 1998 in the British journal The Lancet found that women are more likely to have cold hands than men, regardless of age, body mass index and core temperature. But the core temperature of women's bodies is actually about 0.4 degrees Fahrenheit higher than men on average, these researchers from the University of Utah found. Other studies agree that women may be slightly warmer internally. So, there goes that theory.

And no matter how much you shiver and squirm, there's rarely a medical reason for a woman feeling too cold, said Dr. Sharon Bergquist, internal medicine specialist at the Emory University School of Medicine. In fact, women who are menopausal often find themselves feeling too warm. Still, Bergquist sees a lot of patients who say that their hands and feet are cold.

Some people's bodies do genuinely freak out in winter. About 3% of the U.S. population has a specific medical condition called Raynaud's disease that can cause an icy feeling in the extremities. During an attack, the body has an overreaction to coldness: Blood vessels in the fingers and toes constrict, causing feelings of cold and numbness. The fingers and toes may turn white then blue because there's not enough oxygen-rich blood, and then red as the blood returns, according to the National Institutes of Health. Raynaud's disease is more common in women.

Thyroid problems and anemia can also cause feelings of excessive coldness, Bergquist said.

But if your doctor says there's no medical reason for feeling too hot or too cold, the only remedy is a good compromise, she said.

"Some would say it's easier to add layers of clothing," she said.

Interestingly, a recent Italian study on middle-aged adults found that people who liked their homes kept above 68 degrees F were more likely to be obese than those who prefer a cooler environment.

If feeling too cold isn't a medical condition, it might serve a higher purpose. John Bargh, psychology researcher at Yale University, says temperature perception may actually have something to do with social preferences.

Imaging studies of the brain by Bargh's group have found that there is a connection between the brain region that responds to social temperature and the one that reacts to physical temperature.

This may be the origin of temperature metaphors that are found everywhere in the English language, such as "a warm smile,"the cold shoulder," "warm hospitality" and "a cold stare," according to these researchers.

If there are gender differences in temperature preferences, they might be partially explained by this connection, Bargh said. It's been shown in many studies that women tend to be more interested in social domains of life -- including family and friends -- than men, and men tend to be more inclined toward the instrumental.

From that perspective, it makes sense that women would seek physical warmth and prefer warmer physical temperatures, as they are inherently linked to feelings of social connectedness.

Kathy Higgins says she's never had gripes about temperature control with a romantic partner; her battle is with her teenage sons, as she says in her iReport.

She and her children moved from southwest Florida to Staunton, Virginia, two years ago, and that's when the trouble began. Rebelling against the idea of wearing long sleeves, these boys want instant warmth when it's cold or immediate cooling off when it's hot, Higgins said. "They don't understand that you have to dress for the weather," she said.

"We would get into screaming matches about it, because they would be too lazy to get up and open the window and see what the temperature was like outside, but they wouldn't be too lazy to flip the thermostat," she said.

Still, their mother is also guilty of sabotaging climate control -- back in the 1970s. In her college dorm, Higgins and accomplices put plastic bags of ice over a locked thermostat to force the heat on.

Today, she's found a solution for her new house that works reasonably well: password-protected climate control. But it's not completely foolproof. One night, the older one, Ben, 19, closed the door to the room the thermostat was in and opened the window to trick the thermostat, Higgins said.

"You feel like you're the thermostat police," she said.

Now that spring is coming, everyone is happy with the mild temperatures. It'll be a few more months before they have to deal with air conditioning, she said.

The Ladyzhynskys decided to get insulation in their 1930s-era house to keep the heat in better. It hasn't changed Michelle's feelings about the temperature, but maybe their heating bills will be lower. Generally Orest wins the temperature wars, but Michelle gets control when she works from home.

"I'm always sure to turn down the heat when I leave so he doesn't know," she said.

Matthew Colver, 55, of Castle Rock, Colorado, says of his wife, "whenever we go somewhere, she's too cold and I'm too warm." And in the summer, she won't turn on the air conditioning, and Colver sometimes can't sleep at night.

Their solution: Colver's truck allows the passenger and driver to adjust respective their air vent temperatures independently. Eventually, the air mixes together, but it's a start.

And here's some advice from Michelle Ladyzhynsky: "I would say: stand your ground, although I need to live up to that."