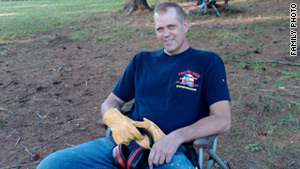 New York firefighter Randy Wiebicke lived "in a way that inspired everyone around him," his wife says.
STORY HIGHLIGHTS
RELATED TOPICS

New York (CNN) -- Firefighter Randy Wiebicke who, like so many New York City firefighters, toiled in and around ground zero in the months after 9/11, died Wednesday following a nearly three-year battle with multiple myeloma, an aggressive and fatal blood cancer.

Wiebicke underwent an experimental stem cell transplant procedure last summer, when his cancer was in remission. But just two months after the transplant, he developed viral infections that, ultimately, his weakening body could no longer fight.

Wiebicke's wife, Madeline, said Randy was "a man who lived his life in the spirit of what being a firefighter meant to him. When others were in danger, running out of a burning building, he was there to run in," she wrote in an e-mail. "He lived his life beautifully, in a way that inspired everyone around him. Having Randy around not only made you want to be a better person, but it showed you how to get there," she wrote.

Hundreds of firefighters and other ground zero workers have died of cancer in the years following the attack on the World Trade Center, according to New York state health officials. So far, however, doctors have been reluctant to link those cancers to 9/11, saying that most cancers take longer than nine years to develop.

But a 2009 study published in the Journal of Occupational and Environmental Medicine suggested a link between the type of cancer Wiebicke had and exposure to the toxic dust at ground zero. "We found a predominance of multiple myeloma in younger folks than we would have expected," said Dr. Jacqueline Moline, the study's author.

Moline is the former director of the World Trade Center Medical Monitoring and Treatment Program at Mount Sinai Hospital. She said doctors monitoring the health of first responders are paying close attention to blood cancers, since they usually develop in a shorter time frame than other cancers.

"Those are the things that all of us in the World Trade Center programs have been focusing on and we're working to see if there are patterns," she said. "We know that it looks like people (with multiple myeloma) might be affected at an earlier age."

Typically, multiple myeloma, a type of blood cancer that affects blood plasma cells in the bone marrow, affects people over age 70. "So seeing folks in their 30s and 40s with myeloma was striking to us," Moline said. Randy Wiebicke was diagnosed with the cancer when he was 52.

Though it will take many more years of study to prove a link between ground zero and cancer, Moline said her gut tells her that "we are going to find that myeloma is in some fashion involved with the World Trade Center."

Wiebicke, who was stationed at a firehouse just blocks away from the twin towers, was not scheduled to work on the morning of 9/11, but raced to get there following the attack. In an interview last summer, Wiebicke told CNN's Deborah Feyerick that he rushed into the city with the mistaken notion that he would be rescuing people.

"I started getting equipment together, you know ropes and things, and I stopped at the local firehouse and got stretchers and went down and went right to the site and there was hardly anybody," he said, tearing up as he spoke. "It was just silent. Nothing, nothing, nobody alive."

Madeline Wiebicke said her husband came home after three days working in "the pit" with his gear covered in soot and ash. In the months that followed, she reminded him in an interview, "every time you drove to work and would come home you'd have a coating of dust on your car."

He soon developed the respiratory problems that came to be known as the "world trade center cough." But after retiring in 2002, the cough faded and Wiebicke looked forward to spending time on home projects, like building a new chicken coop in the backyard. "I thought I was bulletproof," he said last summer, while sitting near that almost-completed coop.

In the summer of 2008, he began feeling sick and, in what he described as "hitting a brick wall," his kidneys began to fail. "It was like somebody shut a switch on my whole digestive system and, you know, it felt horrible."

The kidney failure was only a symptom of a larger problem, however. A blood test proved what doctors suspected, that the source of the kidney problems was multiple myeloma.

The Wiebickes said that many of the doctors they saw believed the cancer was related to his work at ground zero.

"When I told them I was a fireman they, you know, immediately put two and two together and suspected that it had something to do with, you know, 9/11" Wiebicke said.

After dialysis helped his kidneys recover, it was time to attack the cancer, and in February 2009 he underwent chemotherapy and a stem cell transplant.

By last summer, Wiebicke's doctor told him that he was in remission. But the good news was tempered with a harsh reality. The Wiebickes were told that Randy's cancer was very aggressive and would come back sooner rather than later.

It was with that understanding that Wiebicke decided to undergo an experimental type of stem cell transplant in August that has been shown in clinical trials to lead to a much longer remission.

Dr. Guenther Koehne from the Memorial Sloan Kettering Cancer Center pioneered the procedure. He explained that traditional stem cell transplants for multiple myeloma frequently had poor outcomes. In the experimental procedure, officially called a "t-cell depleted allogeneic bone marrow transplant," the immune cells or "t-cells" are removed from the bone marrow stem cells before being transplanted in the patient, reducing the chances of the graft vs. host disease that is often fatal.

Koehne said while he couldn't promise Wiebicke the procedure would be a cure, his hope was "to achieve a long-lasting duration of a remission with the best quality of life."

Watching her husband fight through his illness brought Madeline Wiebicke back to the days after 9/11.

"I just thought that it was over with," she said in the interview last summer. "You know, we went through six months of crying and funerals and I thought it was over. I didn't expect to have to go through it all again."

In addition to his wife, Randy Wiebicke leaves behind a son and two daughters. Services are scheduled for Monday.