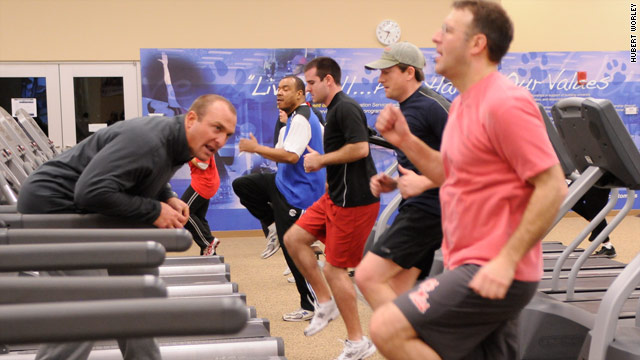 Fitness coach Paul Lacoste is on a mission to help his home state of Mississippi lose weight.
STORY HIGHLIGHTS

The Magnolia State has an adult obesity rate of 33% and has the highest rate of overweight and obese children in the country, but Paul Lacoste said he's inspired to help his home state get fit.

"It's time for Mississippi to get in shape and show the world we can beat obesity," said the 36-year-old coach from Madison.

Lacoste attended high school in Jackson, played football at Mississippi State University where he was an All-SEC and All-America selection in 1996, and then had a brief career in the NFL, CFL and XFL . He said his football career provided him with the tools he needed to be in top physical shape and he now wants to share these lessons with his home state.

He is leading a 12-week fitness program and invited state government leaders from both sides of the aisle, employees from the governor's office, state workers and civilians to participate in the "2011 Paul Lacoste Sports Fit 4 Change Challenge."

Lacoste said this battle is personal for him, because he no longer wants his home state to be famous for being obese.

"We are literally the heaviest people on the planet and it's not something to brag about, so why not turn it into an opportunity to make our state better?" Lacoste said.

Lacoste said he has watched friends struggle with their weight after their football careers ended, so he knows how challenging it is to stay fit. He said he also fights this battle daily, because if he were to stop working out, he could get out of shape, too.

The fitness coach's program was launched after he was able to convince lawmakers he had the right plan to help Mississippians shed pounds.

We are literally the heaviest people on the planet and it's not something to brag about, so why not turn it into an opportunity to make our state better?
--Paul Lacoste

Some 200 participants in Lacoste's 12-week program are part of teams that compete against one another, and obesity, at Jackson State University's Walter Payton Health and Wellness Center. The ultimate goal is for members to get healthy, and to encourage Mississippians to do the same.

Why is Mississippi overweight? For one thing, the state is the poorest one in the nation -- 21% of its residents live below the poverty line, according to the U.S. Census Bureau.

"When you don't have a lot of money, you eat more calorie-dense foods because it's cheaper and often more accessible than healthy foods such as fruits and vegetables," said Dr. Mary Currier, the state health officer for Mississippi. "For some residents, grocery stores are too far away and the nearest business to buy food is the local gas station, where nutritious food options are lacking," she noted. 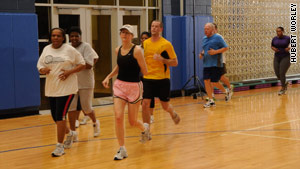 Although poverty puts people at risk for obesity and other problems, Lacoste said it doesn't have to determine their fate.

Since January 11, the fitness coach has led program participants through intense one-hour workouts, four days a week, and it is paying off. In the first six weeks of this year's challenge, participants have lost a combined total of 2,017 pounds. That's more weight dropped than last year's entire program, which was the first year of the event.

"I'm really passionate about this program and I train these guys as intensely as I would train a pro athlete," said Lacoste. "We work on cardio, building strength, speed agility and quickness training and we have tough workouts," he said.

A nutritionist from the Mississippi Department of Health provides information to participants about healthy eating options to help compliment the program. 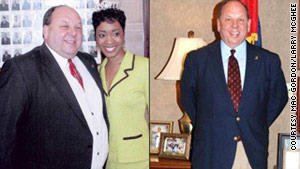 Rep. Steve Holland before and after his weight loss.

State Rep. Steve Holland, a 55-year-old Democrat from Plantersville, said he dropped from 359 pounds to 216 as a result of last year's program and is participating again this year.

"Like many people, I let myself go and gained a lot of weight over the years," said Holland. "I used to have a lot of health problems when I was heavy, but now that I've dropped my weight, I'm as healthy as an ox and feel great," he said.

Holland said he made a commitment to change his lifestyle during Lacoste's program, and hopes other Mississippians will be inspired to do the same.

In addition to dropping pounds, some lawmakers, like Holland, say they are bonding with legislators from both sides of the aisle.

"We feel good, I'm even loving Republicans right now," said Holland. "When you get together at 5 a.m. to work out with other lawmakers, it has this phenomenal way of permeating over at the 8 a.m. meeting and bringing both sides together," he said.

"In addition to getting in shape, the exercise program has provided great time for fellowship and allowed us the opportunity to get to know and connect with each other in a different avenue," said Lee.

Various sponsors have joined the effort to help Mississippi lose weight by funding the challenge.

True change takes place when the pain of staying the same is greater than the pain of change and that's what's happening here.
--Paul Lacoste

At the end of the fitness program, participants will run a 5K race in Jackson to prove that they are "fit for change." The race will end at the state capitol and Lacoste is hoping he can attract celebrities from Mississippi like Oprah Winfrey, Faith Hill and others to be there to cheer on the runners from their home state.

"True change takes place when the pain of staying the same is greater than the pain of change and that's what's happening here," Lacoste said. "I'm inspired to continue this fight and inspired to keep pushing and get as many people involved in our training as I can," he said.

The coach said he plans to organize a program for Mississippi teachers, schoolchildren and their parents later this year, then to ultimately take the fitness program to Washington.

"My ultimate goal is to get our U.S. Congress on board and encourage them be a part of this fitness challenge, too, so they can show the country and the world what is possible," Lacoste said.