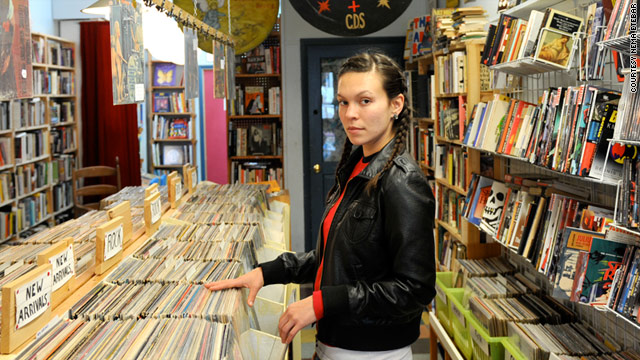 Jessi Teich of Philadelphia, Pennsylvania, had surgery to remove a cyst from her vocal cord.
STORY HIGHLIGHTS
RELATED TOPICS

(CNN) -- In her early 20s, the very thing most fundamental to Jessi Teich's career started to turn against her: Her voice.

The aspiring singer-songwriter, based in Philadelphia, started having pain while teaching 40 private voice students per week, in addition to singing at home for herself. She noticed she couldn't sing for as long as she used to, and lost about an octave and a half in her high range.

A singing career isn't only challenging in terms of producing good music, getting discovered and gaining popularity. Overworking your voice, using improper techniques or straining yourself while otherwise ill can can cause long-term damage, experts say.

"I try to talk to people about not singing when you have a sore throat, and you have a cold," said John Deaver, voice coach to Grammy nominee Sara Bareilles since 2005, who has also worked with Cher and other celebrities.

No one can sing all day, every day, without feeling hoarse. When the voice starts to get raspy, that's your voice telling you that you should shut up, said Jonathan Retzlaff, associate professor of voice at Vanderbilt University's Blair School of Music.

"You begin each day with 100 pennies in a vocal bank. Every sound we make during the day is throwing a penny out," he said. "The voice needs to be rested and really nourished to perform at its best."

How the voice works

The vocal folds, or cords, are two parts of a muscle that has soft tissue covering it, said Dr. Gaelyn Garrett, medical director of the Vanderbilt Voice Center at the Vanderbilt University Medical Center. It's the soft tissue that starts vibrating over the muscle when the vocal folds come together. Air flow makes them vibrate, in a manner similar to when you hold a blade of grass between your thumbs and blow on it. The sound created from that vibration then travels up to the throat and mouth.

One of the most common problems among pop singers is vocal abuse due to performing followed by going out and drinking in a smoky environment, which irritates the vocal folds, said Dr. Sanford Archer, who treats voice disorders in his practice at the University of Kentucky College of Medicine.

When irritation has been going on for only a few days to a week, it is usually an acute laryngitis, vocal abuse from screaming or yelling, or a viral illness, Archer said. Steroids may be prescribed to reduce swelling, along with steam inhalation, lots of hydration and a bit of "voice rest," or refraining from making sounds with the mouth for a certain period.

Specialists like Archer help patients correct their bad habits by encouraging them to do vocal warmups and cool-downs, and to not abuse their voices during the day while speaking. "They think of speaking and singing voice as distinct entities," he said.

Hydration is key for singers, as is mental focus, experts said. Retzlaff recommended making time for solitude and meditation to rest the voice and find the right spiritual and emotional mindset.

When something goes wrong with their singing, even professionals get anxious about how they'll sound the next time. "A lot of our professional singers need a little bit of hand-holding and stress management techniques," he said.

With voice irritation, the vocal cords can develop nodules, which are small bumps, or polyps, which are made of swollen tissue that covers a broader surface of the vocal cord edge. Most nodules and polyps can go away on their own, with good care, said Dr. Marvin Fried, chief of the Department of Otorhinolaryngology - Head & Neck Surgery at Montefiore Medical Center in the Bronx, New York.

After Julie Andrews of "Mary Poppins" and "The Sound of Music" fame underwent surgery for nodules in 1997, the actress lost her singing voice.

A cyst, on the other hand, may develop under the surface of the membrane and may require surgery.

After many tests to diagnose her problem, including for thyroid cancer, Teich found out she had a cyst that looked like a water blister deep under her vocal fold and on the side of it. Making matters worse, she had gastroesophageal reflux disease, otherwise known as acid reflux, meaning acid from her stomach was irritating the lining of her vocal folds. Because the cyst was benign, she decided to try to live with it.

Teich got set up with a vocal therapist and a speech therapist, and saw them weekly for a year and a half. But she wasn't getting the results that she wanted to restore her singing voice and, after much deliberation, decided to have the cyst removed. The ear, nose and throat specialists who operated on her couldn't promise the surgery would help, but Teich was willing to take that chance.

For the two weeks before the procedure, Teich was required to go on voice rest. She carried around a white board to communicate. At her day job in customer service, she endured the misunderstanding of many people who thought she was deaf or mentally challenged.

After the surgery, she was hesitant to start singing, but her voice teacher encouraged her. Once she started doing vocal exercises again, she worked her way back to doing entire songs and writing them, too.

Teich considers the surgery a success. These days, she is learning to recondition her voice, getting up to having longer stamina and sing for longer periods. She's doing a mixture of soul, blues and pop, and gaining a fan base around Philadelphia.

All singers should understand how the breath works and how their bodies integrate many components into making sound, Retzlaff said. Some people with voice problems find great help in relearning how their voices work.

Diana Yampolsky, a voice coach in Toronto, Ontario, has clients visualize where the sound is and how it will travel in respect to their height, width of arms and center of the body.

Deaver's advice is: You can't be a singer and a listener at the same time. Some people critique everything that comes out of their mouth, but listening to your voice too much is a form of hesitation, he said.