Study: Major benefits for spina bifida surgery in the womb 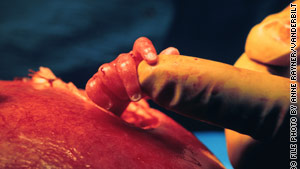 During surgery on a 22-week-old fetus at Vanderbilt, Dr. Joseph Bruner demonstrates size by comparing the fetus' hand to his index fingertip.
STORY HIGHLIGHTS
RELATED TOPICS

(CNN) -- Right before Christmas 2002, Tara Hallman was told her 20-week-old fetus had spina bifida, a common birth defect of the spine.

Hallman was presented with a third option: Doctors could operate on her baby while it was still in the womb.

A new study in the New England Journal of Medicine says that if a baby is operated on while still in the uterus, the most serious complications of the worst form of spina bifada, myelomeningocele, can be lessened.

A clinical trial of 158 women found that brain malformations were reversed in one-third of the fetuses and that almost half the babies could eventually walk without crutches.

"This is not a cure," said Dr. Scott Adzick, lead author of the study and the chief of pediatric surgery at the Children's Hospital of Philadelphia. But, he said, the results of this clinical trial show that prenatal repair surgery is a viable option.

The trial was run at three hospitals: Vanderbilt University Medical Center in Nashville, the Children's Hospital of Philadelphia and the University of California, San Francisco.

The study was stopped early, last December, because the results were so good, Adzick said.

Half the mothers had the surgery from the 19th through the 25th weeks of pregnancy. The other half carried their babies to term and the surgery was performed a few days later.

According to the study, about one in 3,000 babies are born with this type of spina bifida. The bone around the spine doesn't form properly, causing part of the spinal cord to stick out of the baby's back. About 10% of these babies die after birth.

Almost 90% of babies born with this type of spina bifida have hydrocephalus, excess brain fluid. The only way to alleviate the pressure is to insert a tube or shunt to drain it.

After one year, researchers found only 40% of babies in the prenatal surgery group had to get shunts, compared with 82% who had the surgery after they were born.

"The reduced risk of hydrocephalus is by the far the biggest benefit of this surgery," said Dr. Noel Tulipan, director of Pediatric Neurosurgery at Vanderbilt University Medical Center. "I see these patients all the time, and the thing that brings these patients back to the hospital over and over again are the shunts."

Another common problem for children with spina bifida is called hindbrain herniation in which part of the brain and brainstem slip into the spinal column. It is believed that this may contribute to the excess water on the brain. All the babies in this study had this problem.

Researchers found that one-third of those who had the prenatal repair surgery no longer had this problem 12 months later.

Tulipan said he saw this early on. "It was a fairly stunning finding because really up to then there hadn't been any incidence of reversing a brain malformation."

Tulipan said he believes the surgery should be done as early as possible because the longer the spinal cord is exposed to amniotic fluid, the more it can be damaged. At the same time, the longer the unborn baby stays in the womb, the easier it is for it to heal.

"Fetuses can even heal without scars (if surgery is performed) before 20 weeks," Tulipan said. He said he believes as the surgical technique continues to improve, it will allow for earlier surgeries and babies may be born without any visible evidence of previous surgery.

Dr. Catherine Spong, who heads the Pregnancy and Perinatology Branch at the National Institutes of Health, said, "The findings (in this study) suggest that the prenatal surgery allowed for more normal development of the nervous system and had fewer complications."

Adzick, the study's lead author, said he believes this should be the new standard of care for babies with this diagnosis. But these surgeries are not risk-free.

"The risks both to the fetus and the mother cannot be ignored," said Dr. Diana Farmer, the surgeon-in-chief at the University of California, San Francisco's Benioff Children's Hospital.

Eighty percent of the babies in the prenatal surgery group were born somewhat premature and the mothers were at increased risk to have their uterus rupture. This risk carries over to future pregnancies, which is why any woman who has this surgery during her pregnancy will need to deliver her next babies by cesarean section before labor starts.

Tulipan said this is "not a simple procedure by any means and it requires a lot of specialists," which is why he recommends that parents turn to the three centers in the trial, which have experience in this surgery, until more specialists can be trained.

Hallman said she decided to have the surgery on her unborn son when she learned he was less likely to develop the common complication hydrocephalus, water on the brain.

Her son Brett had the surgery on January 25, 2003, at Children's Hospital a few weeks before the clinical trial began.

Brett, now 7, plays baseball and swims. "You would never know to look at him that he has spina bifida," his mother said.

He does have some bowel and bladder issues, which are also common for this disease, but they are manageable, she said. She said the surgery afforded him a much better quality of life and thinks this could change things for future generations.

The first in utero spinal cord repair surgery was done at Vanderbilt University in 1997.

Tulipan, along with Dr. Joseph Bruner, were the first to perform this type of surgery on a baby still in the womb. Doctors replaced the spinal cord into the spinal column and closed up the back just as they would on a newborn.

In this procedure, mothers are given general anesthesia, which also sedates the fetus. The mother's abdomen and uterus are opened so as not to harm the placenta, which nourishes the fetus. They do not remove the fetus from the womb.

The exact cause of spina bifida is unknown, but experts agree women of childbearing age can reduce the risk of their child getting this disease by getting enough folic acid (at least 400 micrograms) from leafy green vegetables, fruits, beans or supplements and vitamin B12 (2.8 micrograms), found in meat and eggs.