Spokesman: Giffords recovering part of her ability to speak 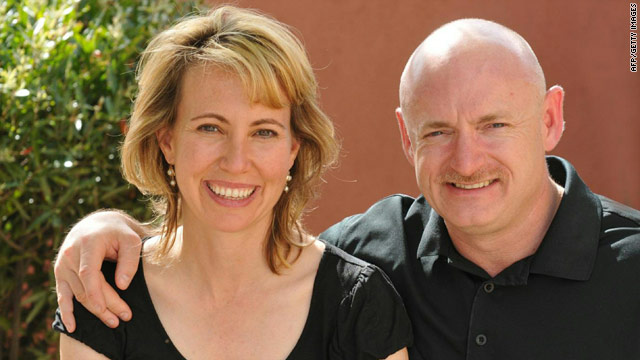 (CNN) -- U.S. Rep. Gabrielle Giffords, recovering from a gunshot wound to the head suffered January 8, is regaining part of her ability to speak and recently asked for toast while having breakfast, staffers said Wednesday.

Spokesman C.J. Karamargin would not divulge what else Giffords has said, other than that she has spoken other words "within the last few days."

Giffords Chief of Staff Pia Carusone told CNN affiliate KMSB in Tucson, Arizona, that the congresswoman made the toast request while eating yogurt and oatmeal Monday. "I said 'absolutely.' "

"It's just one of many good days that she's had," said Carusone, adding Giffords is progressing in speech, physical and occupational therapy every day.

Like at University Medical Center in Tucson, Giffords is befriending the Houston medical staff and is appreciative of the support she is getting, Carusone told KMSB.

"She's happy. She smiles when you walk in the room. She offers you a hug or a pat on the shoulder."

The chief of staff declined to comment on whether Giffords understands what happened the day of the shooting, saying that revealing that information should be up to the congresswoman and her husband, Capt. Mark Kelly.

Giffords is at TIRR Memorial Hermann rehabilitation hospital in Houston. She was moved there late last month from University Medical Center in Tucson, where she was taken after the shooting at a "Congress on Your Corner" event at a Tucson supermarket.

Six people were killed in the incident; Giffords was among 13 injured. Authorities have said they believe Giffords was targeted in the shooting. A 22-year-old suspect, Jared Lee Loughner, is facing federal charges.

Giffords' office said she actually spoke her first words before Wednesday morning, but has been speaking more since then.

"The reason for choosing this rehab facility is because of their track record," Karamargin said. "They are doing a fabulous job and working with her language and speech exercise and the physical therapy part of it."

Doctors have also said she has been following commands -- important, Gupta said, because it shows the ability to understand speech and then execute the command.

But speaking herself "obviously indicates her ability to communicate is there," he said -- meaning she can understand speech and also express herself.

"It means a lot in terms of one's overall brain recovery," Gupta said.

Giffords was shot in the left side of her brain, where major language centers are housed.

Kelly told the National Prayer Breakfast last week that he was able to be in Washington to speak because her condition "continues to improve. Every day she gets a little bit better, and the neurosurgeons and neurologists tell me that's a great sign. The slope of that curve is very important."

Through much of her recovery, doctors said Giffords was unable to speak because of a breathing tube in her neck. Doctors at University Medical Center had said they believed she was trying to mouth words.

Kelly resumed training Monday as commander of the space shuttle Endeavour's upcoming mission. He announced Friday his plan to return to his crew and resume training, saying Giffords is making progress in speech, occupational and physical therapy.

Kelly spent the days after the shooting at his wife's hospital bedside, and NASA had named a backup shuttle commander for the mission in case he couldn't return in time. But Kelly last week underwent a simulated week of training in Houston, where Giffords is in the rehabilitation hospital, and NASA officials said they were confident that Kelly would be able to resume command of the mission.

Kelly told reporters on Friday that he expects Giffords to witness Endeavour's launch, scheduled for April 19. With NASA planning to retire the shuttle fleet, this is expected to be Endeavour's last mission. Karamargin said that Giffords "fully understands" that her husband is flying the shuttle in April and is supportive of the decision.

"I have every intention for her to be at the launch," Kelly said.