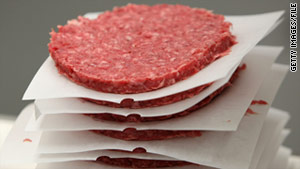 More than 3,000 pounds of ground beef has been recalled because of possible E. coli contamination.
STORY HIGHLIGHTS
RELATED TOPICS

Washington (CNN) -- A California company has recalled more than 3,000 pounds of fresh ground beef patties and other packages of ground beef products that may be contaminated with the E. coli bacteria, the U.S. Agriculture Department said Saturday.

The department's Food Safety and Inspection Service said it became aware of the problem "when contacted by another federal regulated establishment who believed they had received suspect product."

American Food Service of Pico Rivera recalled the products, which were produced on January 31, the USDA said in a press release.

The products subject to recall bear the establishment number "EST. 1913" inside the USDA mark of inspection. They were sent to restaurants throughout Southern California.

Some of the products may be frozen and in restaurant freezers, the department said.

E. coli can cause bloody diarrhea, dehydration and in severe cases, kidney failure. Babies, seniors and people with weak immune systems are the most susceptible.

It was not clear Saturday whether anyone had been sickened by the recalled products.