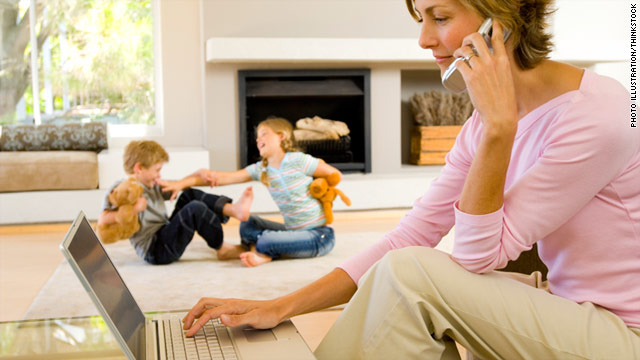 (CNN) -- The length of a mother's employment is associated with an increase in her child's body mass index, according to a study in the journal Child Development.

It's not the first study to suggest that moms' working hours and kids' weight might be related, but it's likely to peeve some mothers.

"It's not causal, it's an association," said lead author Taryn Morrissey about the trends.

"Nobody found a single smoking gun as a cause of childhood obesity. We found quite a small, but (statistically) significant increase in the body mass index of children. This increase is associated with maternal employment."

Morrissey and her co-authors observed the increase in children's BMI -- which, at third grade, was approximately a 1-pound gain for every six months the child's mother worked. The weight gain was cumulative and the link became stronger as the children matured into fifth- and sixth-grade in the analysis of 900 children.

The reasons are unclear.

"The implication is not that moms leave the workforce," said Morrissey, who is an assistant professor in public administration and policy at American University. "If that were to happen, childhood obesity would not go away at all."

In the United States, 71% of mothers work, according to the 2008 data from the Bureau of Labor Statistics.

The father's employment was not measured in the study, because there were not enough stay-at-home dads in the study to make comparisons.

There could be several factors why moms' employment and children's BMI were linked.

Working mothers could be pressed for time, which could cause them to turn to fast food and restaurants.

Carol M. Devine, professor of nutritional sciences at Cornell University, who was not involved in the study, has examined food choices of working, lower-income families.

"Some parents weren't able to eat with their families more than a couple times a week," Devine said. "The job structure had a lot to do with it."

When people don't eat together as a family, the diets are worse and people are heavier, she said.

Morrissey said other factors could be related to kids' sleep patterns and the kind of food and activity they're getting at after-school care. But none of these variables were in the study.

Wen-Jui Han, an associate professor at Columbia University School of Social Work, who read the study, said the results do not imply that a working mom's children are doomed to obesity,

"If I'm working, I'm not doing anything differently -- how much my kids are watching TV, how much meals we're eating together," she said.

Children with nonemployed moms watched about 14.6 hours of TV per week compared with 15.3 for employed moms. Researchers also compared children's physical activity and their time spent unsupervised between nonworking and working moms. None of these factors explained the link between maternal job status and children's weight.

Han said the study shows family and work issues need to be addressed.

"We don't have a choice. We have to go to work," Han said. "How does society as a whole support working families so I still am able to provide healthy food for children, so their weight will not be compromised?"

A 2003 paper found that for every 10 hours a mother worked every week, the child's chances of obesity increased by 1 to 1.5 percentage points. A 2007 study of Japanese schoolchildren found that kids of full-time working moms had higher BMIs and were more likely to be overweight compared with other children.

These types of studies upset Susan Wenner Jackson, who blogs on Working moms against guilt.

"I get sick of all these studies coming out that seem to say being a working mom equals harming your children," she said. "I've seen a bunch of them -- the kids don't get as much attention, they aren't good readers."

"I don't know how valuable these results are. They're not giving me anything."

But Wenner Jackson said it would be ideal if more family friendly policies such as child care, healthier foods in schools and more flexible work schedules for parents could be implemented.

Morrissey said that is the intent.

"The bottom line is that families face many, many constraints and that policies and additional research are needed to help balance health and family life."