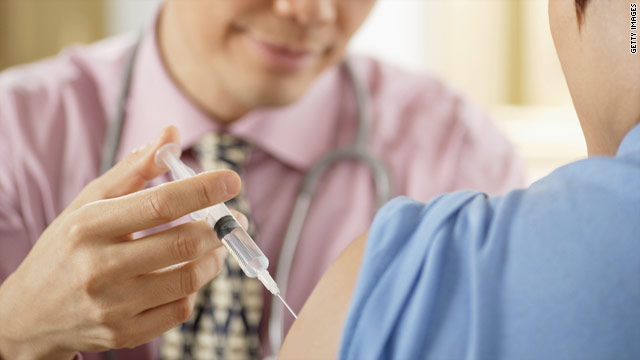 The vaccine reduced the risk of contracting an HPV case that persists for at least six months.
STORY HIGHLIGHTS

(Health.com) -- Boys and young men who receive the human papillomavirus vaccine appear to be at reduced risk of contracting the virus and developing the genital warts associated with the common sexually transmitted disease, according to a large international study published this week in the New England Journal of Medicine.

In an effort to prevent cervical cancer, which can be caused by HPV, public health officials have been encouraging young women to get vaccinated since the Food and Drug Administration approved the first HPV vaccine, Gardasil, in 2006. The vaccine has been approved for boys and men since 2009, but health officials and doctors haven't pushed it with the same urgency.

"Because the story started with cervical cancer, the studies started with females," says the lead author of the study, Anna Giuliano, Ph.D., of the H. Lee Moffitt Cancer Center and Research Institute in Tampa, Florida. "The study of HPV in men is a late bloomer."

Gardasil is given in a series of three injections. In the study, which included more than 4,000 sexually active males between the ages of 16 and 26, roughly 0.5 percent of the boys and men who received all three shots developed genital warts during the subsequent 2 to 3 years. By contrast, about 2.8 percent of the study participants who received a placebo vaccine developed warts.

The vaccine also reduced the risk of contracting an HPV that persists for at least six months, though not as dramatically.

HPV can cause certain cancers of the anus and penis in men, although those diseases are far less common than cervical cancer in women.

The study was designed and funded by Merck, the maker of Gardasil (also known as Silgard). The National Institutes of Health also provided funding.

An estimated 20 million Americans are currently infected with HPV. Symptoms are rare, however, so most people have the virus -- and pass it on -- without realizing it.

"Men are such a vital component of the whole prevention cycle when looking at HPV or any sexually transmitted infection," says Demetrius Porche, a professor of nursing research and evaluation at the Louisiana State University School of Public Health in New Orleans.

Vaccinating men provides a "double benefit" in that fewer men with HPV will also mean that fewer women are exposed, adds Porche, who was not involved in the current study but has researched HPV in men.

Earlier this week, for the first time, theAmerican Academy of Pediatrics included the HPV vaccine on its list of recommended vaccines for boys. Porche and Giuliano also urge boys and men to get vaccinated.

Most health insurance plans cover HPV vaccination for both males and females. If a child between the ages of 9 and 18 is underinsured, the federal program Vaccines for Children may be able to provide assistance.