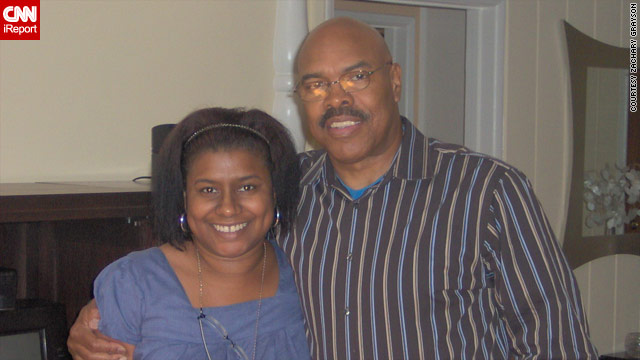 Shelley Brown didn't meet her father until she was in her 30s. Brown's son took this photo of them in Los Angeles in 2008.
STORY HIGHLIGHTS
RELATED TOPICS

(CNN) -- Shelley Brown spent much of her life feeling ashamed and embarrassed that she didn't know the identity of her father.

Brown can relate to Oprah Winfrey's recent revelation that she has a half sister, Patricia, and to the shame that Winfrey says her mother, Vernita Lee, felt about what she had done: giving Patricia up for adoption.

As with people separated from close relatives since childhood, Brown's journey toward reconnecting with her father and his family wasn't straightforward or entirely joyous, but she's glad it happened.

"I didn't want to die not knowing my father, and him not knowing me," said Brown, who also shared an iReport about her experience.

Finding a parent or sibling is like the opposite of a death, in the sense that someone who had no place in your life suddenly appears, said Argie Allen, director of clinical training in the Department of Family Therapy at Drexel University in Philadelphia. It can be the beginning of a happy relationship, but it might also carry the powerful emotions of anger, frustration and disappointment.

People generally begin the exploration of a lost parent or sibling wanting answers about where they came from, she said. This idea of filling in missing pieces of a person's history is a healthy reason to seek out a lost relative, Allen said.

Many say they're excited about re-engaging with someone new. Others believe they can make up for lost time instantly.

But it is unrealistic to believe you can immediately pick up where you left off or erase the past, Allen said. And there is a danger of having a fantasy about that person you seek and then finding out he or she is completely different.

Just as friendships aren't built overnight, it takes time for a relationship to develop between biological relatives who are just meeting for the first time, she said.

In Brown's case, her father was married to another woman when Brown's mother gave birth to her. Brown may never know why her father and his family moved away at that point. It may have been because of the professional basketball career she later learned about or because his wife learned of Brown's birth.

Her father could not be reached for comment for this article.

"What was so wrong with me wanting to meet my father?" Brown asks. "That's the question I just want to ask people that are in the same situation: What is the problem?"

Brown decided to send her father's sister a photograph of herself with her own son. She thought that if they saw the resemblance, that might help, "and maybe they could see that I'm just a human being," Brown said.

Not long after, Brown received a call from her father. He said he had her contact information and that next time he came back to Coatesville, Pennsylvania, where she was born, they would get a DNA test together.

"I didn't sleep for weeks. I was just too thrilled" about meeting him, Brown said.

In the interim, Brown found out that her father had visited Coatesville but did not contact her. In retrospect, she understands that he may have been still stuck on the shame of the past, the way that Oprah said her mother was about Patricia.

Not wanting to let a new family member into your life in a situation like this can stem from a fear of the unknown, Allen said. There may be a lot of anxiety around accepting this unfamiliar person, especially because he or she may reject you after initial contact.

Also, a parent who gave up a child might still have guilt about the adoption. A sibling might feel ashamed of having had a closer relationship with a birth parent than the "lost" one who seeks out the family.

"The truth is, even when we choose particular paths of not knowing, it doesn't mean you're totally exonerated from the experience," Allen said.

Brown didn't give up. She found out about her paternal grandmother's funeral by reading the obituaries for her hometown and drove there that very day.

At the funeral for a grandmother she never knew, Brown scanned the crowd for men who might be her father. Her friend spotted a man who resembled Brown.

Brown's father introduced her to a brother and three sisters who had never known of her existence. They were welcoming at first, but later two of them said that they didn't want to talk to her until she had a DNA test, which left Brown feeling hurt. Brown did ask her father about getting tested; he said he didn't need it.

Generally, Brown's relationships with her new family members are amicable. In 2008, the sister who is Brown's age invited her out to visit in Los Angeles. They occasionally still text and e-mail. As for her father, they recently became Facebook friends, and they may meet next time he's on the East Coast.

Seeking vs. being sought

Others aren't as passionate about finding their origins but nonetheless can't escape them.

Kurt Sonderegger, 44, of San Francisco never tried to find his birth parents; he knew he was adopted, but has always considered the people who raised him his only mother and father.

About 10 years ago, he got a call out of the blue from woman named Jarrett Kroll, who had been trying to find him for more than a decade. She said her own mother had made her give up her first son for adoption and that son was Sonderegger.

Kroll told Sonderegger she'd been part of birth mother support groups and had lobbied for birth parents and adoptee rights. It was a private investigator who finally located Sonderegger, after adoptions agencies failed to help.

Sonderegger developed a close bond with Kroll and with his half-brother, Charlie, with whom he feels a genuine brotherly connection. Still, Sonderegger continued calling his birth mother "Jarrett" and made it clear that their relationship was a friendship and not necessarily parent-and-child.

Still, whenever he would go to see his parents, he would make a stop to see Kroll. Once, he spent two months living in her apartment in New York. At her encouragement, Sonderegger found and met his birth father, but they don't really keep in touch.

About 10 years after their initial reunion, Kroll learned she had pancreatic cancer. Sonderegger went to see her and spent four days in New York with her. When her health declined further, he went to see her one last time.

"She was not conscious, but I know she could hear me anyway. I thanked her from the bottom of my heart for having the courage to have me and then later for finding me," he wrote in his iReport.

"I am still close with Charlie and am forever grateful for Jarrett for helping me get a better understanding about my crazy self," he wrote in his iReport.

Brown said she hopes she inspired others to seek out the parents whom they have never known.

"It's your birth-given right, what's so wrong with it?" she said.