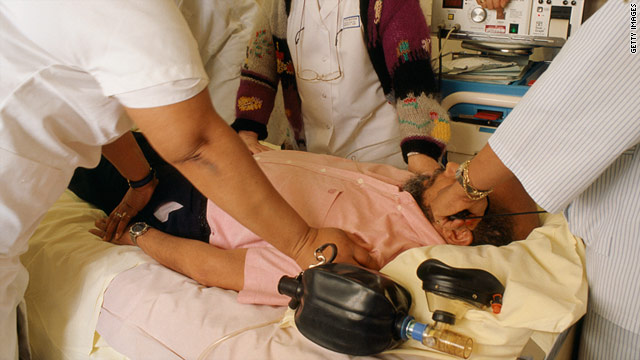 A panel of experts voted 10 to 8 in favor of classifying ECT devices as high risk for the treatment of severe depression.
STORY HIGHLIGHTS
RELATED TOPICS

(Health.com) -- An advisory panel to the Food and Drug Administration has recommended that devices used in electroconvulsive therapy ?also known as "electroshock therapy"?should continue to be classified as high risk.

The devices, which induce a seizure by delivering an electrical current to a patient's brain, are used to treat intractable cases of depression, as well as bipolar disorder, schizophrenia, and other mental disorders.

On Friday, a majority of experts on the panel expressed support for classifying ECT devices as high risk for the treatment of depression and several other conditions. Although the panel members "weighed in," no formal vote was taken and none is expected, according to FDA spokesperson Karen Riley.

If the FDA follows the panel's advice, as it usually does, the makers of ECT devices may need to provide the agency with additional safety and efficacy evidence, like that required for prescription drugs. ECT machines are currently in a high-risk category but have so far avoided the cumbersome FDA approval process thanks to a grandfather clause.

Proponents of ECT were dismayed by the panel's assessment. Just two small companies in the U.S. make ECT devices, and some experts worry that neither will have the resources to conduct the studies that the FDA may require, which could ultimately restrict access to the treatment.

"It's going to be very unfortunate," says Helen Lavretsky, M.D., a professor of psychiatry at UCLA. "It's going to disappear out of our practices. There are 100,000 people who undergo ECT in the U.S., and it won't be available to them."

One of the device manufacturers, the Illinois-based company Somatics, declined to comment.

Nancy Koenigsberg, the legal director of Disability Rights New Mexico, in Albuquerque, New Mexico, one of many patient advocacy groups that argued for stricter oversight of ECT devices in the lead-up to last week's meeting, says her organization was "pleased" with the outcome.

"We agree that the manufacturers of ECT devices should have to go through the [pre-market approval] process to show they are clinically safe and effective," Koenigsberg says. "We hope the FDA takes the committee's advice."

The FDA's official decision will not be made for at least a year, and doctors can continue to use ECT devices in the interim. Even if the agency requires manufacturers to seek approval for their products, the devices will remain in use during the approval process, Riley says.

"We're optimistic that this life-saving procedure will continue to be available as a treatment option for patients with debilitating illnesses," the president of the American Psychiatric Association, Carol Bernstein, M.D., said in a statement.

The association supports reclassifying ECT devices as medium risk, which would preclude the need for additional research regarding their safety and effectiveness.