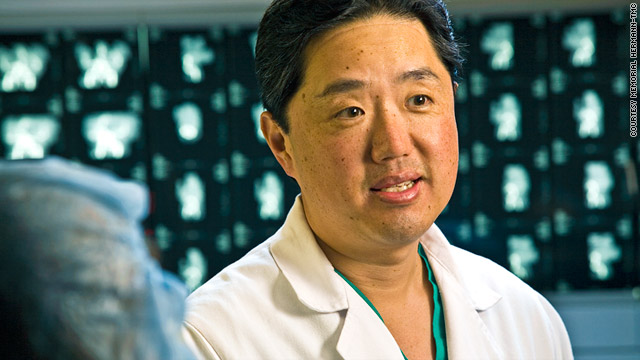 Dong Kim says the hardest part of his job is when things don't go so well.
STORY HIGHLIGHTS

Houston, Texas (CNN) -- The doctor currently in charge of Gabrielle Giffords' neurological recovery, the man who's had his very hands in Giffords' brain, was once mistaken for a kung fu expert.

It was 1972, and the second-graders at Ed Smith Elementary School in Syracuse, New York, didn't quite know what to make of Dong Kim, the boy who'd just arrived from Korea.

"There were probably not that many Asian people there at that time, so a lot of the kids just assumed I knew kung fu," Kim remembered, laughing. "I got some notoriety out of that. I knew nothing about kung fu, but I could kind of fake it and impress people, or at least impress other 7-year olds."

That boy grew up to be chairman of the director of the Mischer Neuroscience Institute at Memorial Hermann Texas Medical Center. Giffords came under his care last week when she was transferred to Texas from the University Medical Center in Arizona.

On Monday, Kim removed a drain from Giffords' brain, which had been placed there to remove excess fluid.

Kim, whose father was studying library science at Syracuse University, recalls his early days in the United States sitting in a classroom not understanding anything "a little anxiety-provoking, but I felt pretty comfortable." He enjoyed math from the beginning, since the numbers made sense, and within the year, he learned English.

"I do think that the immigrant experience is quite a strong one," he said. "I remember growing up feeling strongly that my parents had come here for me and my sister. I remember them commenting over and over again what a great country this was and how we're lucky to be here. I think that kind of instills in you that you're getting this real opportunity and you should try to take advantage of it."

Kim's family later moved to Southern California, and he received his bachelor's degree from Stanford University.

Medicine was not his first love.

"At 18 or 19, I was trying to write the great American novel, but I would stare at the page for an hour and half and get two sentences out, so that's not good," he said, laughing. "What I wrote didn't read well, even to me."

By his junior year at Stanford, Kim had taken an interest in medicine, and he received his medical degree from the University of California-San Francisco. Within a few years of finishing his residency, he arrived at one of his chosen fields of research, the genetics of brain aneurysms, a condition in which a blood vessel bulges out and can later rupture and bleed, causing a stroke.

His interest lay partly in his own family history. Three of his four grandparents died of brain hemorrhages, or bleeding in the brain, as did his 37-year-old uncle, a surgeon who Kim says was kidnapped by the North Koreans.

Kim and his team discovered several genes related to aneurysms. He had his parents tested, and both were negative.

Another area of research involves using stem cells from a patient's skin to treat spinal cord injuries. The treatments they developed have allowed paralyzed rats to walk again, and they hope to begin studies in humans in the next two to three years.

Kim says his favorite part of his work is when a patient returns to his office after undergoing a traumatic illness, such as a brain injury, stroke or tumor.

"When I first meet a new patient with a new problem, it's tough for everybody. They're upset. I'm worried about them. I feel for what they're going through, and it's the best thing to get them through it," he says.

The hardest part of his job is when things don't go so well. Sometimes, for example, he has a patient with cancer, and there are few treatments.

Or "even worse," he said, is when a patient has a surgical complication.

"No matter who you are, a few times a year, that happens, and the thought that you did something, even though you were trying to help them, and things didn't go well, is very, very difficult," he says. "But nobody's perfect, and you can't have a 100% success rate."

As for his most famous patient, Kim has very little to say aside from a few comments at news conferences. At a recent interview with CNN, a public relations representative from his hospital interrupted whenever a question was asked about Giffords.

When asked whether he couldn't speak because the hospital had limited him or because Giffords' family had asked him not to, he laughed.

"I don't know if I can comment on not commenting," he said.

"It would be dishonest if I said (treating Giffords) wasn't different, because there's all this scrutiny. Everybody's calling," he added. "Certainly, that heightens the situation."

But he knows that doing anything different for her, breaking with regular protocol, would be a mistake.

"I think the best way to handle it is in the mechanics of care of the patient is to do everything the same," he said. "I think you can potentially get into trouble when you try to start doing things differently or making exceptions."