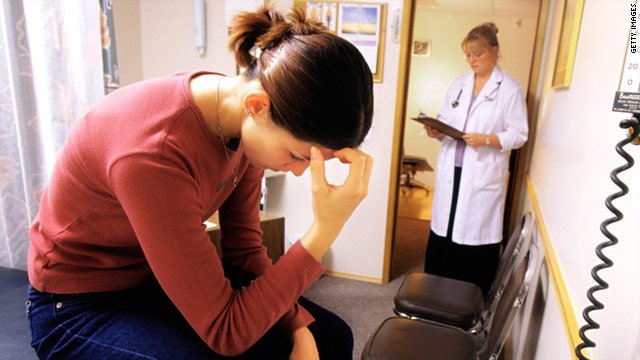 While the rate of psychiatric problems was unchanged in women who had an abortion, it spikes in women who carry babies to term, study says.
STORY HIGHLIGHTS
RELATED TOPICS

(Health.com) -- As if deciding how to handle an unplanned pregnancy wasn't stressful enough, several studies in recent years have suggested that young women who have an abortion may be at increased risk of mental health problems afterward.

Those concerns are unfounded, according to a new study conducted in Denmark and published this week in the New England Journal of Medicine. In fact, the study found, while the rate of psychiatric problems was unchanged in women who had an abortion, it appears to spike post-birth in women who carry their babies to term.

"Women who are in a difficult situation -- pregnant and unsure whether or not to continue with the pregnancy -- should know that they do not have an increased risk of having a first-time episode of a severe mental disorder after an abortion," says the lead author of the study, Trine Munk-Olsen, Ph.D., an epidemiologist at Aarhus University, in Denmark.

Munk-Olsen and her colleagues identified 350,000 women in a national health registry who had no history of psychiatric problems, had become pregnant for the first time, and had either an abortion or a successful childbirth. (Women who had miscarriages were excluded.) The researchers then compared the number of women in each group who received mental health care in the months immediately before and after childbirth or abortion.

Roughly 1 percent of the women who had abortions were treated for a psychiatric problem -- such as depression, bipolar disorder, or anxiety -- in the nine months leading up to the procedure, a rate that did not change measurably in the year following the abortions, the study found.

By contrast, the rate of psychiatric problems in the women who gave birth, while lower overall, rose from 0.3 percent in the nine months pre-birth to 0.7 percent in the year after birth. (This may be partly explained by the familiar phenomenon known as postpartum depression, the authors suggest.)

Health.com: 10 things to say (and not to say) to someone with depression

The study was funded by grants from the Danish Medical Research Council and the Susan Thompson Buffett Foundation, which has supported family planning and access to abortions.

Robert Blum, M.D., an adolescent health expert at the Johns Hopkins Bloomberg School of Public Health, in Baltimore, says the findings confirm other research that has questioned the link between abortion and psychiatric problems. "There really is no empirical basis for the concept of post-abortion trauma, depression, traumatic stress disorder, or the like," says Blum, who was not involved in the new study but co-authored a systematic review of the subject that was published in 2008.

Most of the studies that have reported a rise in psychiatric risk post-abortion were too small to be reliable and failed to account for women's prior mental health, Blum says. The new study is a significant improvement, he adds, because it looked only at first-time mental health problems and compared rates before and after abortion.

Still, the study does have some important limitations. Although the researchers did control for the women's age and any parental history of mental disorders, they didn't take into account social or economic characteristics, nor whether a pregnancy was actually wanted. And the researchers don't know if the study participants had untreated mental health problems, Blum notes.

It's also unclear how well the findings might translate to the U.S. The Danish population is far more homogenous than the U.S. population, and while federal abortion laws are similar in both countries, state laws vary widely in the U.S. The support systems available to a pregnant woman could therefore be very different depending on where she lives, says Vignetta Eugenia Charles, Ph.D., a former colleague of Blum's who is now vice president of programs and evaluation at AIDS United, a nonprofit based in Washington, D.C.

Health.com: Condom broke? What to do after unprotected sex

Blum and Charles both say that the new study isn't likely to quiet the controversy over whether abortion can trigger subsequent mental health problems. So far the debate has largely been driven by politics rather than science, Blum adds -- and the politics have overshadowed the most important lesson from the research.

"Making an abortion decision is stressful. Carrying a pregnancy to term is stressful," he says. "Women need social and mental health supports. Those who have adverse effects from abortion or from carrying to term particularly need counseling and support services. Overall, the debate has failed to provide that help to women."