'The King's Speech' hits close to home for many 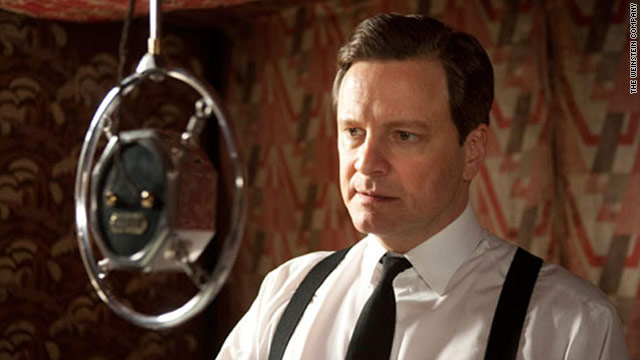 (CNN) -- Job interviews can give anyone the jitters; for Jeff Davis, they were torturous.

Since about age 10, Davis has had a stutter. He endured laughter from peers throughout school, but he refused to let his disability stop him from pursuing a career in public relations. Still, it hasn't been easy.

"All of that emotional baggage you had as a kid comes right back to you, and you feel, 'I'm not good enough. They're not going to hire me because of this,' " said Davis, 52, of Atlanta, Georgia.

Davis identifies with the struggles portrayed in "The King's Speech," which tells the true story of how England's King George VI learned to speak more fluently for public addresses. The movie has garnered critical praise; on Tuesday, it scored 12 Oscar nominations including best picture, lead actor, supporting actor and supporting actress.

In the movie, the king's journey toward greater fluency, like Davis' and those of many others who stutter, is often painful and frustrating.

"It really captured well that anticipatory anxiety, the fear around the speech, the frustration that people who stutter have even today in seeking help and seeking relief of their symptoms," said Dr. Gerald Maguire, professor at the University of California, Irvine, who has a stutter and researches the phenomenon.

More than 3 million Americans stutter, with more males than females having the condition. The exact causes of stuttering remain mysterious, but brain imaging suggests that it is a neurological problem.

How to not stutter like a king
RELATED TOPICS

Christy Ludlow, professor of communication sciences and disorders at James Madison University and formerly of the National Institutes of Health, has collaborated in research showing that people who stutter tend to have decreases in white matter in the left hemisphere of the brain in the areas involving motor speech areas. The brain appears to be the only source of stuttering; the structure of the mouth, tongue and vocal cords don't have anything to do with it.

Still, scientists do not know whether these abnormalities in the brain are the cause or the consequence of stuttering.

There is also evidence of a genetic link in stuttering. A 2010 study in the New England Journal of Medicine found that about 60% of children who stutter have clear family histories of stuttering, but that leaves a substantial number of stutters that cannot be explained through genetics.

About 70% to 80% of children who stutter recover spontaneously, experts say, but there is no way to know who will grow out of it and who will require a lot of extra help.

Therapy usually includes focusing on the breath and the mechanics of breathing for speech. The patient is also taught strategies for opening the vocal cords and for speaking more slowly. He or she may learn to ease into particular sounds or take breaths before them, Ludlow said.

An important part of speech therapy, as shown in "The King's Speech," is having a positive relationship with the therapist, Maguire said.

When King George VI is able to read perfectly while listening to music instead of his own voice, that is a real phenomenon, as the rhythm can influence fluency, Maguire said. The way a person hears himself or herself can also influence stuttering, and techniques using auditory feedback are still in use. Today, there are devices available that play back a person's voice a fraction of a second later, which help slow speech but are normally not good long-term solutions, Ludlow said.

Also, the rhythmic movement of dancing can induce fluency because of the role of the brain's motor system in stuttering, Maguire said. Additionally, while not shown in the movie, a stutter can subside while a person reads aloud in unison with someone else.

Nothing a parent does can cause a child to stutter, but if your son or daughter has the condition, it's crucial to have quality time to read with the child, said Jane Fraser, head of the Stuttering Foundation. Exposing the child to language is important, and given that rhythm can help with fluency, nursery rhymes or Dr. Seuss books may help, she said. The nonprofit organization recommends discussing the speech issue with your child and seeking help as soon as possible.

Pharmaceutical treatments are also in the works for stuttering, which Maguire and colleagues are working on. Preliminary experiments have shown that a drug called pagoclone, still in trials, helps a stutter. Maguire is now beginning a trial with an antipsychotic medication called asenapine, marketed by Merck & Co. as Saphris, which Maguire said has helped him personally.

These drugs have not been approved by the U.S. Food and Drug Administration for stuttering, but Maguire believes that they have potential. Maguire's work has been the only real breakthrough in the area of drug treatment, but it is still uncertain, and further research needs to be done, Ludlow said.

Although King Georgia VI had a dedicated teacher coaching him, Davis has tried a smattering of classes and therapies to gain skills for coping with his stutter. These included learning how to breathe properly while speaking and controlling the vocal cords. And he didn't let himself hide from the world: He forced himself to take speech as a minor in college, even though professors weren't always encouraging.

"My teacher said, 'It's a shame that you stutter, because you have a really nice voice,' " he said.

In the mid-'90s, he attended a program for stuttering and came out fluent; he didn't stutter for six months. But, just like athletes have to train every day, Davis fell out of practice with breathing and vocal exercises, and the stutter returned. This is common among people who stutter, experts say: Because speech therapy treats the symptoms and not the cause, it can be effective for only short periods of time unless the person consistently practices.

Since then, Davis has pushed on without formal assistance and accepted that his voice will break, or he will repeat certain syllables, in the course of normal conversation.

"I've met stutterers that just, they just retreat, in their life and in their job. They take a job sitting in the back where they never have to talk to anybody. That's just not my personality," he said. "If I stutter, I stutter, and it's just going to be hard."

His job involves event production and sales -- and, although it requires a lot of speaking, which can be difficult, he believes that his stutter has helped him develop a reputation for honesty.

"I'm not a stereotypical fast-talking salesman, because I just can't do it," he said.

Stuttering hasn't stopped some of the biggest names in sports, entertainment, science and government from becoming successful, either.

Tiger Woods overcame a childhood stutter, as did actor James Earl Jones. Among other household names, Marilyn Monroe, Jimmy Stewart, Charles Darwin and Lewis Carroll had stutters, according to the Stuttering Foundation, as well as Vice President Joe Biden and former Secretary of the Treasury Henry Paulson.

Jones told CNN last year, "I stuttered so badly I gave up talking" from ages 5 to 14.

Actress Emily Blunt, 27, told the Daily Beast in June that her mother took her to all kinds of classes and specialists, but none of that helped in her early adolescence. Her breakthrough came when a teacher gave her a part in the school play and suggested that she speak with a different accent.

As for Davis, although people will still hang up the phone on him or laugh, he believes that he is having a full life. He actually feels more at ease when someone asks him about his stutter, so that it's out in the open.

"Stuttering has defined who I am as a person today, without a doubt, good and bad," Davis said. "I think, hopefully more for good."