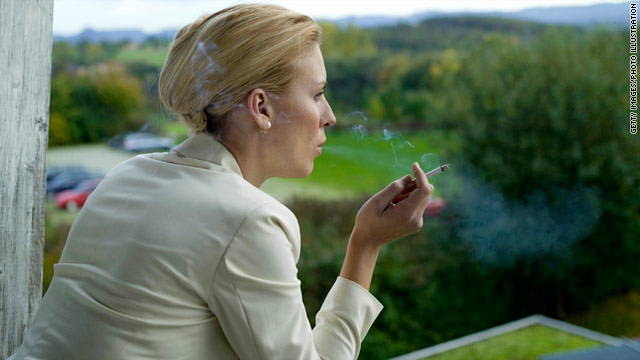 (Health.com) -- Women who smoke have an increased risk of developing breast cancer, especially if they become smokers early in life, a new study suggests.

But the added risk appears to be small, except among heavy smokers. Compared with women who had never smoked, those who were regular smokers for any amount of time had a 6 percent higher risk of developing breast cancer, the study found. Women who maintained a pack-a-day habit for at least 30 years had a 28 percent higher risk, however.

"I would not put [smoking] on the list of important risk factors, [but] when you look at the subgroup of heavy-duty smokers who start early and smoke for a long time, that's more serious," says the lead author of the study, Karin Michels, Ph.D., an associate professor of cancer epidemiology and ob-gyn at Harvard Medical School, in Boston. "That's when you pay closer attention."

While cigarette smoke is a potent carcinogen, smoking also lowers levels of estrogen -- one of the primary fuels that drive the growth of breast cancer. "The reason why previous studies may not have found strong associations or any association could be because the two effects may cancel each other out," Michels says.

In the study, which appears in the Archives of Internal Medicine, Michels and her colleagues looked at 30 years of data on more than 110,000 women who were part of the government-funded Nurses' Health Study. In all, the study participants reported 8,772 cases of invasive breast cancer during that timeframe.

Although the increase in breast cancer risk associated with smoking was just 6 percent overall, some subcategories of women -- such as those who smoked before their first child was born -- were at slightly higher risk. (Having children at an early age is believed to protect against breast cancer, perhaps because of changes that occur in the breast tissue.)

"It's not surprising that the risk was so low, because breast cancer is driven by hormonal factors," says Joanne Mortimer, M.D., director of the Women's Cancer Program at City of Hope Cancer Center, in Duarte, California. "The risk for breast cancer seems to be in the hormone transition period between premenopause and postmenopause, when there are a lot of changes in hormone functions." (Mortimer was not involved in the new research)

In fact, women who smoked after menopause appeared to have a decreased risk of breast cancer compared with nonsmokers. Given that both menopause and smoking lower estrogen levels, this finding adds to the evidence that estrogen is a risk factor for invasive breast cancer, the authors say.

The findings, of course, don't mean that the considerable health risks associated with smoking should be overlooked, says Debra Monticciolo, M.D., a professor of radiology at Texas A&M Health Science Center College of Medicine, in Temple.

Although smoking "is not going to be a major player in our assessment of risk for breast cancer," Monticciolo says, "there are lots of reasons not to smoke. I can't think of anything good to come from smoking."