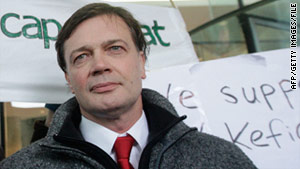 (CNN) -- The medical journal that published a now-retracted paper linking childhood vaccines to autism conducted only a cursory investigation into complaints about the research when they emerged, another British journal reported Tuesday.

The author of the 1998 paper, Dr. Andrew Wakefield, and his co-authors reaffirmed their findings after complaints about Wakefield's research surfaced in 2004.

However, the medical journal BMJ reported Tuesday, the examination into how the study was conducted was led by the editor of the Lancet, which published the paper, and involved "no formal investigation" of the allegations.

"In short, the accused were investigating themselves," the BMJ reported.

Tuesday's article is the third and last of a series published by BMJ, which has called Wakefield's study an "elaborate fraud" and accused him of planning to launch a business venture "off the back of the vaccine scare."

Following a three-year investigation, Britain's General Medical Council ruled in January 2010 that the way Wakefield conducted his research was dishonest and irresponsible. One month later, the Lancet retracted the study. In May 2010, British authorities revoked Wakefield's license to practice medicine.

Wakefield continues to insist he has done nothing wrong, and a vocal contingent of advocates for children with autism continues to support him.

In response to the latest article, the Lancet's editors said they "strongly disagree" with the BMJ account "and firmly stand by our actions and decisions." It noted that 10 of Wakefield's co-authors had their names removed from the paper after learning in 2004 that Wakefield had been paid by lawyers to help build a case against vaccine manufacturers -- a serious conflict of interest he failed to disclose -- and pointed out that Wakefield's most damning assertion was made at a separate news conference after the study was published, not in the paper that the journal published.

"From this point forward, Wakefield encouraged the media and a grassroots network of anti-vaccine advocates to believe that this vaccine may cause autism," the Lancet said. It added, "At no point did we actively defend Wakefield's public statements about the link between MMR and autism."

The journal said the Royal Free Hospital, where Wakefield worked at the time of the publication, conducted the 2004 investigation that led to a partial retraction by the paper's co-authors.

"At each stage we acted as soon as we had the evidence to do so," it said.

Wakefield has accused the author of the BMJ report, freelance journalist Brian Deer, of being paid by the pharmaceutical industry. In financial disclosure forms, Deer has stated that he has received no such payments.